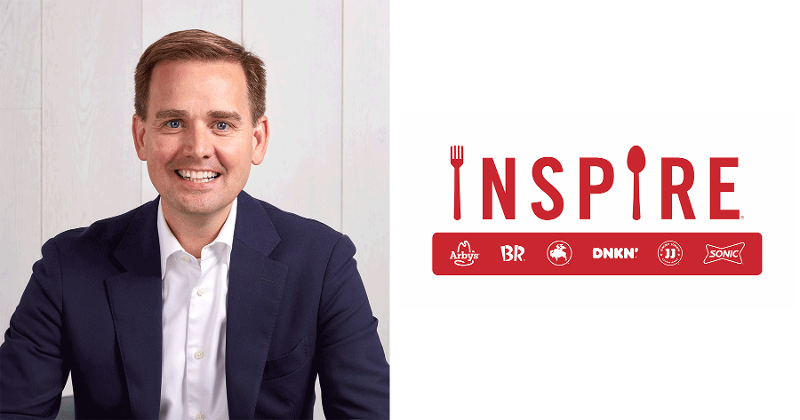 In its first major corporate move since acquiring Dunkin’ and Baskin-Robbins, Arby’s parent Inspire Brands has hired Pret A Manger and Starbucks veteran Michael Haley as president and managing director of international operations.

Haley, who reports directly to Inspire CEO Paul Brown, is responsible for expanding all of Inspire’s brands outside of the U.S.  In addition to Arby’s and the two concepts acquired through the $11.3 billion acquisition of Dunkin’ Brands, those holdings include Buffalo Wild Wings (BWW), Sonic, Jimmy John’s and Rusty Taco.

Before the Dunkin’ deal, Inspire had only 200 restaurants operating abroad, and all of those flying the BWW or Arby’s flag. Dunkin’ and Baskin-Robbins bring nearly 9,000 international locations to the international division. With that addition, about 40% of Inspire’s restaurants are now located outside of the United States, according to Brown.

It will be Haley’s job to build off that base, starting with the expansion of BWW and Arby’s.  He is also responsible for international operations and relations with existing overseas partners.

In an interview with Restaurant Business, Haley said that his initial focus will be on stoking interest in Inspire’s other brands among the restaurant companies that currently operate Dunkin’ and Baskin-Robbin outlets abroad.

“I believe it’s always best to focus on existing partners in existing markets,” says Haley, who was previously chief partnership officer for Pret. With Dunkin’ and Baskin-Robbins now part of the family, “it’s really a gift because you have people in market who have local knowledge.”

Haley was not aware while being courted by Inspire that the company was planning to buy Dunkin’, which lands high on the list of U.S. chains ranked by their presence overseas. “They kept asking me things like, ‘What do you think of the coffee market?’” he recalled. His interviewers also asked him what U.S. brands he admired because of their international operations, a list that apparently included Dunkin’, which he’d run up against during his time with Pret and Starbucks. But “I learned about [the deal] from the media, like everyone else,” he said.

The pleasant surprise of having Dunkin’ in-house provides Haley with a solid international foundation and structure. But he says there’s still a need to fill out his team within Inspire’s Atlanta headquarters, where he’ll now be based.

Interviewed near the end of his first week on the job, Haley acknowledges that he’s not reached the point of setting milestones for Inspire’s overseas expansion. “There isn’t a need to plant flags for the sake of that,” he says. “I’m trying to create a vision that includes knowing where to aim. It’s easy to say, ‘In five years, this is how big we went to be.’ But how do we get there? We need to figure out that journey.”

Part of that effort may be figuring out how Inspire’s legacy brands may need to be tweaked overseas. For instance, one of Arby’s domestic strengths is having drive-thrus. Abroad, consumers aren’t as car-based as their American counterparts. “I haven’t owned a car in 14 years,” says Haley.

That challenge may be particularly pointed for Sonic, which serves customers as they sit in their cars in a classic drive-in format. The brand is the largest U.S. restaurant chain without a presence overseas, according to Inspire.

Given Inspire’s penchant for growing domestically through acquisitions, will be identifying potential purchases abroad be part of his mission?

“We’re always open to other opportunities,” he says. “I think that’s a shared responsibility across the whole executive team.” And internationally, “we have ground to grow.”