CKE Restaurants on Friday named Ned Lyerly the company’s new CEO, effective immediately, amid a shakeup at the Franklin, Tenn.-based owner of Hardee’s and Carl’s Jr.

George Condos, a 30-year industry veteran, was also named to the company’s board of directors.

Lyerly, who has been with CKE for more than three decades and most recently was the company’s president of international, succeeds Jason Marker, who was named to the post just two years ago.

“Our brands each have tremendous heritage built on great products, great people, great experiences and decades of performance,” Lyerly said in a statement. “We will leverage these equities to solidify our place as QSR brands of choice.” 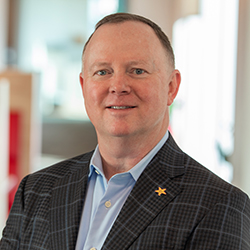 He takes over the parent company of a pair of chains that have struggled in recent years amid intense competition in the fast-food space.

Marker, who had been working to split the chains’ identities since he replaced longtime CEO Andy Puzder, had also courted controversy—he was sued for age discrimination last year after allegedly getting rid of older employees following his takeover of the chain, according to reports.

Lyerly has held several positions at CKE over the years and has contributed to the development of more than a third of the company’s restaurants. He has worked in development, marketing, finance and franchise operations.

Ezra Field, CKE board member, called Lyerly “a focused leader and proven restaurant operator” who is “the right leader for CKE going forward.”

Condos, meanwhile, has held senior leadership roles at numerous chains over the years, including Arby’s, Dunkin’ and Dairy Queen.