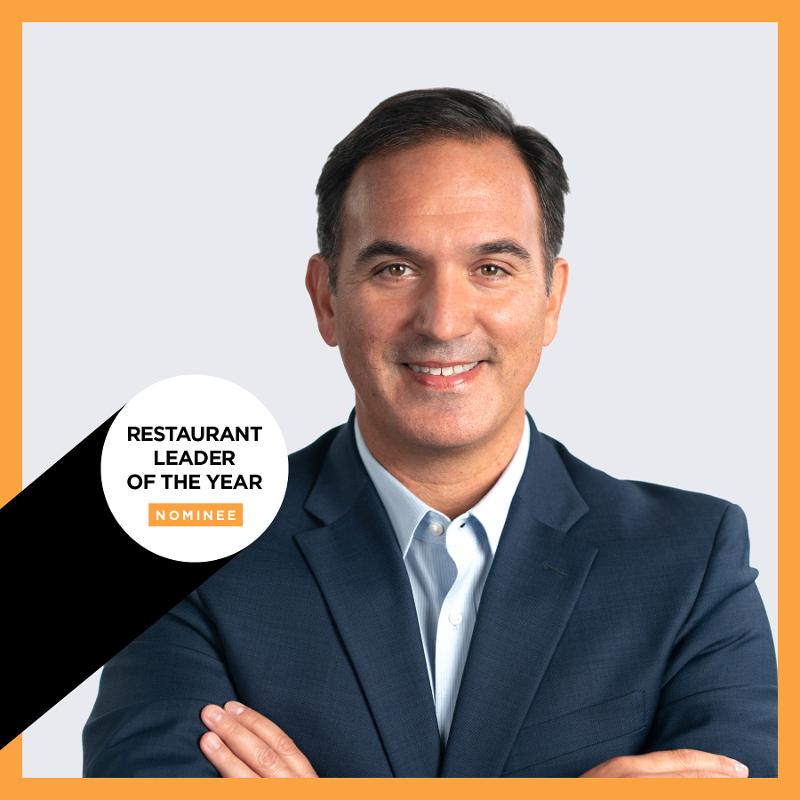 In 2004, when he was a director of operations with Burger King in North America, José Cil was touring restaurants in different markets, helping them implement a new operational strategy—made-to-order burgers. The idea at the time was to provide customers with a more consistent product.

But it wasn’t easy. And during one such visit, a 30-year veteran manager asked Cil who “the idiot” was that came up with the idea.

He had a discussion with the manager on why the shift was important for the brand and its customers. “She understood much better why we were doing that,” Cil said. “It confirmed for me that not just mandating and dictating but collaborating and partnering, you can accomplish big things.”

That collaborative mindset has been particularly important for Cil as he moved up the ranks at the chain and was ultimately named CEO of parent company Restaurant Brands International in 2019.

The results have been remarkable. International growth at Burger King has soared over the past decade. In late 2019, the company’s Popeyes brand ushered in a new era for the concept, and perhaps for the fast-food business as a whole, with its introduction of the chicken sandwich. It also earned Cil a spot among the nominees for the Restaurant Leader of the Year.

Cil owes his job at RBI to Jill Granat, the company’s general counsel. At least that’s what she tells him. “I remind him all the time,” she said.

The Miami native and son of Cuban immigrants went to college at Tulane and law school at the University of Pennsylvania. He practiced law for more than six years at a law firm, specializing in bankruptcy.

He heard Burger King was in the market for an in-house counsel in 2000. He knew Granat, who had been a junior attorney there at the time. It wasn’t an obvious fit—Burger King was looking for a trademark lawyer in-house and Cil specialized in bankruptcy. “Just put my name in, put in a good word and I’ll do the rest,” he said, according to Granat.

“They ended up hiring him and the rest is history,” she said.

Cil spent three years as an attorney there before moving into operations, which required him to spend half a year working in the restaurants. He spent time working any kind of shift. “I got an incredible opportunity to spend time in the restaurant,” he said. “Over time, that’s had a big impact how I think about the business, managers, team members in the restaurant and the workload they have in the restaurant.”

Over the years, he worked in a number of divisions—and ushered in that made-to-order burger strategy. By 2008, the chain was struggling, and managers were being moved in and out of the company. He then took a job with Walmart as a regional general manager in South Florida.

He would spend just 10 months there.

“I was enjoying it,” Cil said of Walmart. “And then a small Brazilian outfit came along and acquired BK.”

That outfit was 3G Capital, a private equity group that in 2010 took Burger King private with the idea of turning it around, kickstarting international growth and then going public again. John Chidsey, then the CEO of Burger King, called Cil and talked him into coming back and running the chain’s European market.

Though it was difficult to leave Walmart so soon—and it resulted in a “tough conversation with my wife and daughter”—Cil thought it was a good opportunity to turn around the Europe business.

“I used to refer to the EMEA business as a not-for-profit,” Cil said, referring to the Europe, Middle East and Africa business. “We had a ton of presence, but we weren’t fully penetrated almost anywhere.”

International growth would be massive for Burger King.

“Plan it, get to scale quickly as possible and create awareness, which gets people into restaurants, so you can build more restaurants.” —José Cil

Executives at the time, including Cil, looked at the best markets to grow internationally, and that generated some friction with the local partners.  “Turkey, Puerto Rico," Cil said. "They had master franchise partners that felt the brand was theirs. They fought like crazy. They were obsessed with making Burger King in their markets the dominant player.”

That was the model the company would use. The company invested in joint-venture partnerships with master franchisees in international markets, letting them operate the company with some brand support. It created the capital structure to ensure that the operators had the cash to develop the brand quickly.

Burger King did joint-venture deals in Brazil, Russia and then China. When the company saw the model work, it repeated the approach in several other countries, including France, South Africa, Italy and Poland. “Plan it, get to scale quickly as possible and create awareness, which gets people into restaurants, so you can build more restaurants,” Cil said. “We felt we had a good management model as a team that could help move the ball forward quickly and effectively.”

It’s a model the company is using to expand both Popeyes and Tim Hortons internationally. Popeyes in particular could benefit, considering the popularity of chicken and the success of rival KFC.

Cil’s experience in running Europe gave him some important perspective that would help down the line. “I was on 11 or 12 joint venture boards,” he said. “I was literally in board meetings with all these franchise partners working through management, hires, incentives, things that ultimately drive the business forward. The franchisors can be very disconnected from the process.”

It was definitely a path we had to go down. We felt we had to be in the space.” —José Cil

Since that 3G-Burger King deal, Atlanta-based Chick-fil-A has grown by more than $10 billion in annual system sales, according to data from Restaurant Business sister company Technomic. It surged past KFC to be the largest chicken chain in the country.

Bone-in chicken chains have seen this growth and wanted to be part of it, recognizing that bone-in chicken was no longer a growth market in a hand-held, convenience-oriented world. Popeyes was no exception. It made 19 attempts at an easy-to-eat boneless product before RBI bought the chain in 2017.

The new owners wanted a 20th. It was among the first discussions executives had after the deal was complete. “It was definitely a path we had to go down,” Cil said. “We felt we had to be in the space.”

Amy Alarcon, the vice president of culinary innovation at Popeyes and a 10-year veteran of the chain, worked with a team of chefs to develop a recipe for the sandwich. It had “four basic ingredients,” Cil said.

“It’s an incredibly good product,” he said. “Our roots, our DNA, our starting point, is in great food, particularly good chicken. That was what started the chicken sandwich wars.”

Getting a bone-in chicken chain to be able to do a sandwich, and do it at enough scale, was no easy feat. “We changed the flow of the kitchen massively,” Cil said. The move required upgrades in the restaurants, including kitchen display systems for sandwich makers.

The company also had to convince franchisees to price a high-quality sandwich at just $3.99. But Popeyes really wanted people to try it. “We felt the price point was really important,” Cil said. “We learned that when people try the product, we shoot up the list of chicken QSRs in terms of preference. Certainly in the top two or three. When people haven’t tried it, they have a difficult time rating us highly. We felt it was really important to drive trial.”

Well, it worked. Good reviews of the sandwich, and the now-infamous “Y’all good?” tweet in response to Chick-fil-A, ushered in one of the most remarkable two-week periods in industry history. Consumers lined up in drive-thrus and dining rooms to order the chicken sandwich in August 2019. The chain ran out of product.

Popeyes reconfigured supplies and worked with operators to staff up in the next few weeks before the company brought the sandwich back that November. The result was an almost 40% same-store sales lift in the fourth quarter of 2019. It was the best single quarter in modern industry history.

Since then, the chain has added more than $1.3 billion in system sales. They barely slowed during the pandemic—they were up 28.5% in the second quarter, when sales just about everywhere else were depressed due to the quarantine.

“We added more than 50% to four-wall cash flow at the store level,” Cil said. “It was unheard of. It’s not something that happens in our business.”

It also unleashed a lot of competitors. In the restaurant business, no idea is too good not to replicate a bunch of times. Since Popeyes introduced its chicken sandwich, 40 chains have come out with their own upgraded versions. One of the upgraded versions is from Popeyes’ sister chain, Burger King.

He also emphasizes people, Finazzo said. Senior leadership, including Cil, will interview every person the company hires. “I worked for Macy’s before this,” Finazzo said. “I met the CEO once and I think I got on the wrong elevator. Here, during the interview process, you’re already exposed to the most senior leadership of the organization.”

RBI operates in a no-office environment, so the top executives all sit in the same types of closely organized, 6-foot desks as everyone else. Executives sit next to one another and roll back their chairs whenever they want to have an impromptu meeting.

Cil’s fellow executives call him a “regular guy” who is “very relatable.”

“We’ve got a really tight leadership team,” Granat said. That helped during the pandemic. “We spent months and months on the phone, twice a day every day,” she said.

Finazzo also noted that Cil brought with him a focus on diversity and inclusion that hadn’t been there in the years before he took over. “The first few meetings he said, ‘We’re not good at this, we need to do better,’” Finazzo said. “It’s not going to get better overnight. We went out, put a plan together, and we’re better today on that front than we’ve been as a company.”

There remain considerable issues for RBI to tackle—notably, the performance of Tim Hortons in Canada, which was struggling going into the pandemic. The company overhauled management, improved the quality of its coffee and made investments in marketing, remodel and digital.

That’s been a test for Cil—in 2019 he noted that the company went into its Tim Hortons ownership with the wrong mentality, marketing the brand more like a rising competitor than the dominant market force that it is. The recovery has been interrupted by a pandemic. Restrictions in Canada are more severe now than in the U.S. Getting that right will be a major test, given that Tim Hortons represents a massive portion of RBI’s revenues and profits.

“The way we’ve managed the business has changed a lot,” Finazzo said. “He says, ‘I’m empowering you guys to do it the right way.’ It’s easy to say, ‘We need to do something quick to turn this around.’ He’s willing to take time to do it right.”