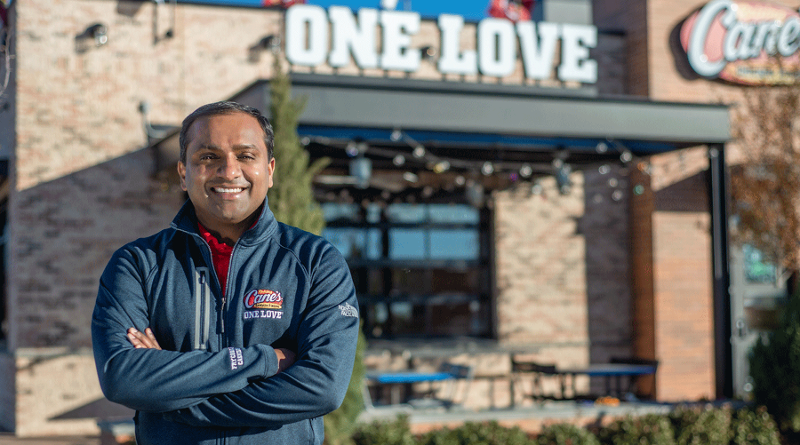 The co-CEO of the Raising Cane’s chicken-finger chain has a heads-up for all the chains that hope to simplify operations by keeping their menus scaled down to pandemic levels.

That near-fanaticism, he says, was why the chicken-finger chain lost nary a feather during 2020, a hellish stretch that eliminated about one-sixth of the nation’s restaurants by starving them of sales. Cane’s, in contrast, had its best year ever, and opened 60 of the 75 stores it had targeted before coronavirus hit the U.S.

“We had about a two-month delay [in our development] because construction crews weren’t allowed to work,' says Kumaran.

He adds in a sly aside, “We told them to come work for us if they were looking for a job in the meantime.”

Kumaran says there’s no formal delineation of duties between himself and the other holder of Cane’s co-CEO title, chain founder Todd Graves. “As we like to say, we’re all fry cooks and cashiers,” he says. Those titles are printed on his and Graves’ business cards.

But the Buffets Inc. alumnus notes his constant focus on finding and retaining enough qualified employees to support Cane’s sales growth and expansion. Any respite from that burden, he says, was temporary at best; the responsibility shifted, but far from disappeared, even in the dark early days of the crisis.

During Week One, “we were down 30% in traffic because our dining rooms were closed,” Kumaran recalls. “Three weeks later, down 30% became up 10%.”

Raising Cane’s was already selling its limited roster of products through a variety of channels, including drive-thrus. It also had a thriving to-go business because its signature, chicken tenders, traveled well.  When the public embraced chicken finger foods as the hot food of the pandemic, sending sales of tenders and wings soaring industrywide, Cane’s sales continued to climb accordingly.

Staffing enough people to keep the restaurants humming was only part of the challenge, says Kumaran.

“When the management team met, we realized, ‘Our crew members are panicking, and they don’t need to do it,’” recalls the co-CEO. “So we let everyone know, ‘No crew left behind! We’re not going to let anyone go. Whatever you were scheduled for, that’s what will be in your paycheck.’”

Kumaran and Graves both adhere to the philosophy of servant leadership, or enhancing a business’ financial performance committing management and the operation to serve all constituents—guests, stakeholders and employees. Instead of economizing on labor, “we gave $6 million in extra pay,” says Kumaran. “We gave millions to the communities we serve.”

He also realized that he and Graves weren’t the only operational savants in the organization. Kumaran had advanced his career through that discipline, and he insisted on keeping the COO’s role as he moved up to president and then co-CEO at Cane’s.

But unit-level managers showed the advantage they had in being close to customers, employees and the ways they interact.

“It was a new level of learning, seeing how much entrepreneurial values matter,” said Kumaran. “We didn’t have to think about things like menu complexity.

The same held true for throughput. The time it took to get a meal through a Raising Cane’s drive-thru averaged under 3 minutes. “I would have told myself, ‘Man, 2 min. 45 seconds—our service time is really good,” said Kumaran. “Our operators managed to turn that into 2 min. 30 sec. Now they’re turning that into 2 min 25 seconds.”

Virtually all of the 530-unit chain is company-operated, and managers are encouraged to indulge their entrepreneurial bent even though they’re not franchisees.

“What we really spend our time on is actually creating a Todd Graves in every single restaurant,” says Kumaran, who cites leadership development as a key focus. “We want that founder in every restaurant.”

In an industry that abounds in rags-to-riches stories, Graves’ climb still stands out in industry lore. He and a college classmate came up with the idea of a chicken-finger restaurant in business school. They were reportedly given a C+ and told their idea was a stinker.

“Undaunted, the young entrepreneur put on a cheap suit, carried a briefcase adorned with brass combination locks and presented his business plan to any banker that would see him,” according to Cane’s official history.

They saw him all right. But each one showed him to the door, agreeing with Graves’ professor.

Graves decided to raise the capital himself, working first as a boilermaker at a refinery in Los Angeles.  Hearing about the money that could be made in the wilds of Alaska, he then headed north, landing a lucrative but dangerous job as a commercial salmon fisherman.

He raised enough money to return to open his dream restaurant in Baton Rouge in Aug. 1996. Graves built the prototype himself by hand. It was named after his dog, a yellow lab named Raising Cane.

Kumaran joined the brand in 2014 as COO. Previously, he’d been president and COO of a multi-concept restaurant franchisee in the Middle East, and earlier had worked for Buffets Inc., the parent of Old Country Buffet and HomeTown Buffet.

Kumaran dismisses the suggestion that he shoulders the real work of being a CEO while Graves functions as more of a figurehead, cheerleader and conscious of the brand.

The company had decided to split the role in two back in 2019, for reasons that Kumaran seems loath to reveal, and went ahead with the division in 2020 as planned.

“Todd and I are very much alike,” he says. “There is no real division. I manage the business on a day-to-day business, and I bring Todd into everything that’s going on—he’s in on everything. He gets personally involved in every new restaurant—where do the fryers go, how’s the kitchen set up, what will it look like.”

Cane’s, he says, doesn’t adhere rigidly to a prototype. Every building is unique to its location.

Still, virtually all of the 85 restaurants the company will develop this year will be newly constructed rather than converted from another brand; “maybe one” will be a conversion, Kumaran says.

“Our buildings are so unique that most times we end up scraping the pad and building from scratch,” he continues. It’s that simplicity thing, he adds.

Going forward, “it’s crew members first, crew members always.,” Kumaran says of his role. “We have 34,000 crew members now. We will have 40,000 crewmembers by the end of the year.”

Part of the recruitment effort will be pointing out that Raising Cane’s is  one of only three restaurant companies listed on Glassdoor.com’s 2021 ranking of the best places in America to work, along with In-N-Out and LongHorn Steakhouse.