After a 34-year run as head of the Texas Restaurant Association (TRA), Richie Jackson will be succeeded as CEO in July by Emily Knight, a veteran educator with experience in working with young people considering a career in the restaurant business.

Knight is currently managing director of Higher Education North America at Study Group, an international education organization. Earlier, she served as president of Kendall College, the Chicago hospitality school, where she also interacted with the politicians and Illinois Restaurant Association to promote local tourism.

The TRA describes Knight as “a fierce advocate for the importance of career and technical education.” 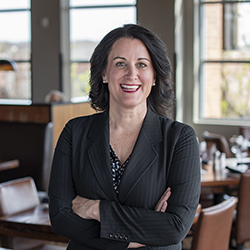 “Dr. Knight is clearly the best person to lead TRA into the future. She is a proven leader with strategic business development skills, a vision of good culture for our stakeholders, and the ability to bring people together,” John Gessner, owner of Dallas-based Tacos y Vino and president-elect of the TRA’s board of directors, said in a statement. “She is exactly what TRA needs as the organization enters its next chapter of expanded member value and growth.”

“While my education and experience have prepared me for this role, it is my leadership philosophy and love of people that will drive my success,” Knight said in the statement. “I will focus on creating value for our members and be the best possible representative and advocate to the Texas legislature. I have prepared for this role my entire life and I am ready to serve.”

Knight holds a doctorate in higher education leadership from Walden University; a master of science in management from Troy University, a bachelor of science degree in hospitality administration from Newbury College. She also participated in Pizza Hut’s management training program.

Jackson’s retirement marks the end of an era for the TRA, which he joined 47 years ago, ascending to CEO in the mid-1980s. Under his leadership, the association addressed such issues as worker’s compensation reform, efforts to increase the minimum wage and a host of other legislative issues.

The TRA is one of the largest state restaurant associations. It represents some 48,000 restaurants, which generate sales of $66 billion and employ 1.3 million people, making the state the second largest restaurant market after California.