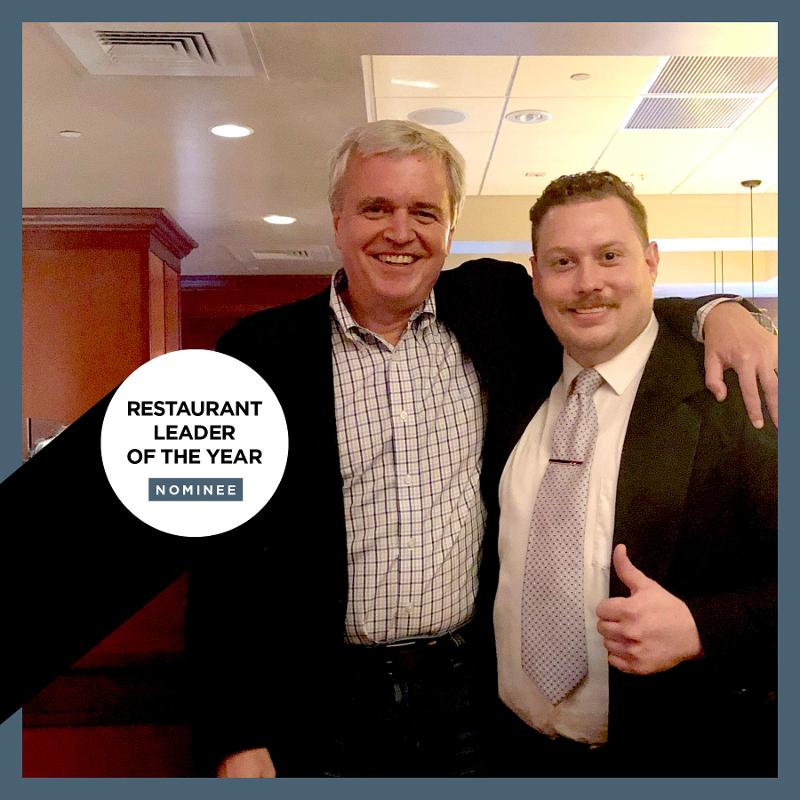 For David Deno, as for many Americans, the unimaginable morphed into a better-believe-it crisis on that March night in 2020 when Tom Hanks revealed he had COVID-19, the NBA suspended its season and President Trump halted inbound travel from Europe.

As with many restaurant executives, the CEO of Bloomin’ Brands knew the industry was hurtling into an unprecedented disruption when sales dropped like an anvil—free-falling 60% in two days, in the instance of the Outback Steakhouse and Carrabba’s multi-billion-dollar parent.

Like many of his peers, Deno pulled together his team for the first of what would become daily meetings to brainstorm how they should contend with a horror story come to life.

But that’s where Deno stopped acting like most chain executives.

The critical concern for all operators during that time of uncertainty was liquidity—the need to have enough cash available to sustain a business while minimal sales were trickling in. The no-brainer was to lay off staff, often by the tens of thousands, because restaurants were either closed or limping along at sales levels two or three people could handle.

Deno wouldn’t have it. After what he calls “a spirited discussion,” he and the leadership team decided not to furlough a single one of Bloomin’s 90,000 restaurant employees—a decision that would cut into Bloomin’s liquidity by $42 million.

“I told the team that everyone’s salary would remain intact if we let all our restaurant employees keep their jobs,” Deno recalls. “The only one who took a pay reduction in our support center was me—I went without a salary for four months.”

“The phrase I tried to use with our leadership team was, ‘Let’s not just think of today, but let’s do what we’re going to be proud of tomorrow.’” —Dave Deno

“I know what it’s like for someone to lose their job,” the onetime resident of a small rural town in Minnesota said of the contrarian move.  “No. 2, I knew we had the resources to do this.”

No. 3 was realizing the pandemic wouldn’t last forever. Deno was working in China when SARS, another viral pathogen, walloped Asia in 2002 and 2003. He knew how bad things could get, but he also knew that an epidemic in the U.S. couldn’t last forever.

“The phrase I tried to use with our leadership team was, ‘Let’s not just think of today, but let’s do what we’re going to be proud of tomorrow,’” he recalls.

The decision would prove crucial to Bloomin’s rebound. During the first 25 days of April, sales at a typical company-run Outback shot 13.3% past the intake for the same period of 2019. Bloomin’s next-biggest business, Carrabba’s, generated an 18.6% comparable sales jump for that period, again measured against 2019 results.

“Our decision not to let anyone go is crucial to getting us to this point,” Deno told analysts in reviewing the company’s recent performance.

Competitors like BJ’s Restaurants say their recovery from the pandemic is being hindered by an inability to hire people fast enough to handle returning business. “We didn’t have to go out and rehire people,” says Deno. “We just turned it back on, and people came back to work. We had very little if any of ‘I’m not sure I want to work in restaurants again.’”

He also credits the no-furloughs policy for a current retention rate that he says bests competitors’ figures. “I’ve literally had restaurant workers come by when I was visiting their restaurant and tell me their story of how they got through the pandemic with a job,” he says.

The move also earned Deno a nomination for Restaurant Leader of the Year, an honor bestowed on the industry’s top chain CEO by the editors and readers of Restaurant Business.

But it’s far from the only reason he’s a finalist.

Under Deno’s leadership, Bloomin’ has entered the U.S. fast-casual market through the launch of Aussie Grill by Outback, a scaled-down spinoff of the company’s flagship brand.  The company plans eventually to expand the brand through franchising, an expansion tactic it has used on only a limited basis to grow its full-service operations domestically.

In the midst of the pandemic, Bloomin’ also launched a virtual chicken concept called Tender Shack. The upstart’s chicken tenders and sandwiches are produced in the kitchens of Outback and Carrabba’s for delivery via a third-party delivery partner. Takeout service may be added, Deno says.

Bloomin’ has projected that Tender Shack’s sales could hit $75 million on an annualized basis.

Priorities for 2021 and beyond

Aussie Grill and Tender Shack fit Deno’s mission of developing small-box and fast-casual opportunities for Bloomin’. The company has also experimented with scaled-down express units that offered items from both Outback and Carrabba’s for takeout and delivery. At least some of those stores have been converted into ghost kitchens serving Bloomin’s brands, including Aussie Grill.

“I know the advantage of small-box economics,” Deno says, referring to his 15 years at Yum Brands, the parent of Taco Bell, KFC and Pizza Hut.

He sees convenience growing in importance to consumers, a dynamic behind the surge in delivery as well grab-and-go service. “I always felt that having a great dine-in business is important, and that will never go away,” says Deno. “But I knew if we could figure out a way to get our food in the hands of consumers when they eat at home, we’d have a winner.”

He credits that conviction to what he learned while working as Bloomin’s CFO under his predecessor as CEO, Elizabeth “Liz” Smith. Smith had come to Bloomin’ after serving as president of Avon Products.

“I learned two really big things from Liz: The power of understanding the consumer, and the importance of getting ahead of current trends and investing ahead of growth,” Deno explains.

He credits her with making his life easier when the pandemic hit, even though Smith had left the company at that point. “Under Liz’s leadership in 2016, we moved into delivery in a big way,” he says. That gave Outback and Carrabba’s a running start when the pandemic limited full-service operations to off-premise sales during the pandemic.

“I’d say it was a sprint,” Deno says of the pre-pandemic push.

Smith also showed him “the power of understanding the consumer,” he continues. “‘Where is the customer going? How do you move to take advantage of those things?’”

Convenience is definitely rising in importance to the guest, he stresses. But he also sees ample evidence that the customer’s hunger is building for “fresh, uncomplicated eating. The fewer ingredients that are in an item, the better.”

“We’re very good at that,” he says, citing the menu Outback introduced in September. It incorporates what the chain learned during the pandemic about streamlining the list of what’s available to customers and simplifying the preparations. The upshot was a rise in positive consumer evaluations and a decline in food and labor costs.

Deno also credits his former boss with opening his eyes to a different management style. Watching her, he came to understand what he calls “the power of connecting with people on a personal level.”

When he’d started his career with a major food processor in the Midwest, “I was on the same floor as all the senior management, and I never saw them,” Deno recalls. “That is not possible today. You have to be out and about. You have to have a strong connection with your employees.”

He acknowledges that he has to work at being more outgoing and sociable, traits that go against the stoicism and reserve that were instilled in him while growing up in Minnesota as the child of a teacher and a nurse.

‘The thing that helps me a lot—I have to be careful it doesn’t hurt me—is I am a very calm person,” he says. “I try to lead with a sense of purpose and a sense of calm.” It was a temperament that helped when the COVID crisis erupted: “I saw my job as delivering priorities and hope.”

“I learned two really big things from (Former CEO) Liz (Smith): The power of understanding the consumer, and the importance of getting ahead of current trends and investing ahead of growth.” —Dave Deno

As a child, he wanted to be a teacher who also coached the school’s sports teams. He’d played soccer and basketball and run track as a youngster, experiences that he credits as supreme learning experiences for a future CEO.

His ambitions changed after he walked into a class on finance as an undergraduate at Macalester College in the Twin Cities. He was taken with what he heard from the professor, Karl Egge, who remains a friend and mentor to this day.

He came out of Macalester with a bachelor’s degree in economics and political science, earned an MBA from the University of Michigan, and found himself in an analytics job at Burger King, where he stayed for eight years.

His 15 years at Yum followed. During that time, he held a number of senior leadership and finance-department positions, including CFO.

Deno was recruited by Best Buy, the big-box electronics retailer, where he served as president of the chain’s Asian division and CFO of its entire international operation.

He joined Bloomin’ in 2012, overseeing a number of support center functions, including CFO. He succeeded Smith as CEO in March 29.

Looking long-term, Deno says he sees Outback growing to 1,000 units from the 700 or so that are currently in operation. He also cryptically mentions the opportunity to expand Bloomin’s virtual-concepts business through partnerships, though he declined to comment further. Meanwhile, refinement of the Aussie Grill concept is continuing.

He hopes his stamp on the company will be first and foremost the development of talent.

"The capabilities of people at the restaurant level and the support center, that is Job One,” he explains.