Editor's note: All week, Restaurant Business will run profiles of the five nominees for Restaurant Leader of the Year.

Nothing in Wyman Roberts’ 30 years in the hospitality industry had prepared him for March 2020.

Sure, the CEO of Chili’s and Maggiano’s parent Brinker International had dealt with hurricanes and other isolated incidents with difficult aftermaths. But those chapters had a clear beginning and end. Two years ago, there was no precedent or playbook for a dangerous virus shutting down restaurants nationwide and triggering a cascade of related problems that continue to this day.

To get through it, Roberts, a finalist for this year's Restaurant Leader of the Year award, has depended on skills and instincts honed through a lifetime in restaurants. He has exuded calm without ignoring the trouble the company was in. He has leaned on existing strategies and developed new ones in real time. He has launched an entirely new restaurant brand—a calculated gamble that paid off in more ways than one.

His dynamic response to a turbulent two years helped Brinker rebound from the depths of the pandemic to its place as one of the most successful brands in the business. But it was more than just a return to form—it was a reimagining of what those restaurants can be.

When the pandemic struck, Roberts’ first job was to understand how it would impact the two chains and their more than 1,650 restaurants. Brinker’s finance guys crunched the numbers.

“They came back with a forecast that was kind of similar to what we typically do in a tough time,” Roberts said—losses of 3% or 4%. The CEO dismissed the projections out of hand.

“No guys,” he told the team. “This is a different thing. This is gonna be big.” Weeks later, same-store sales at Brinker's company-owned restaurants had plummeted more than 64% year over year.

Outwardly, Roberts worked to relay a sense of calm across the company. He wanted to express comfort and optimism. “Don’t get paralyzed,” he said.

That started with maintaining a presence, both physically and virtually. While many offices across the country shifted to remote work, Brinker leadership remained in the company’s Dallas headquarters.

“Right or wrong, we stayed in the building,” Roberts said—a signal of commitment and stability.

Leadership also stepped up their communications with staff. They hosted live quarterly town halls and made sure they saw restaurant leaders regularly, even if it was over video. Roberts’ mantra to his teams during that time: “We’re crossing a bridge, and we just gotta get over the bridge, and we’re gonna take everybody we can with us over the bridge.”

At the restaurant level, some smart pre-pandemic investments allowed Brinker to pivot quickly when dining rooms had to close. It had offered delivery since 2019. Other technology, like tabletop ordering tablets, was moved into the parking lot to support takeout, allowing restaurants to essentially turn inside-out.

“We just got after it and had a lot of the technology and partnerships in place to be able to do it successfully and not miss too much of a beat,” Roberts said. He called the process “invigorating.” 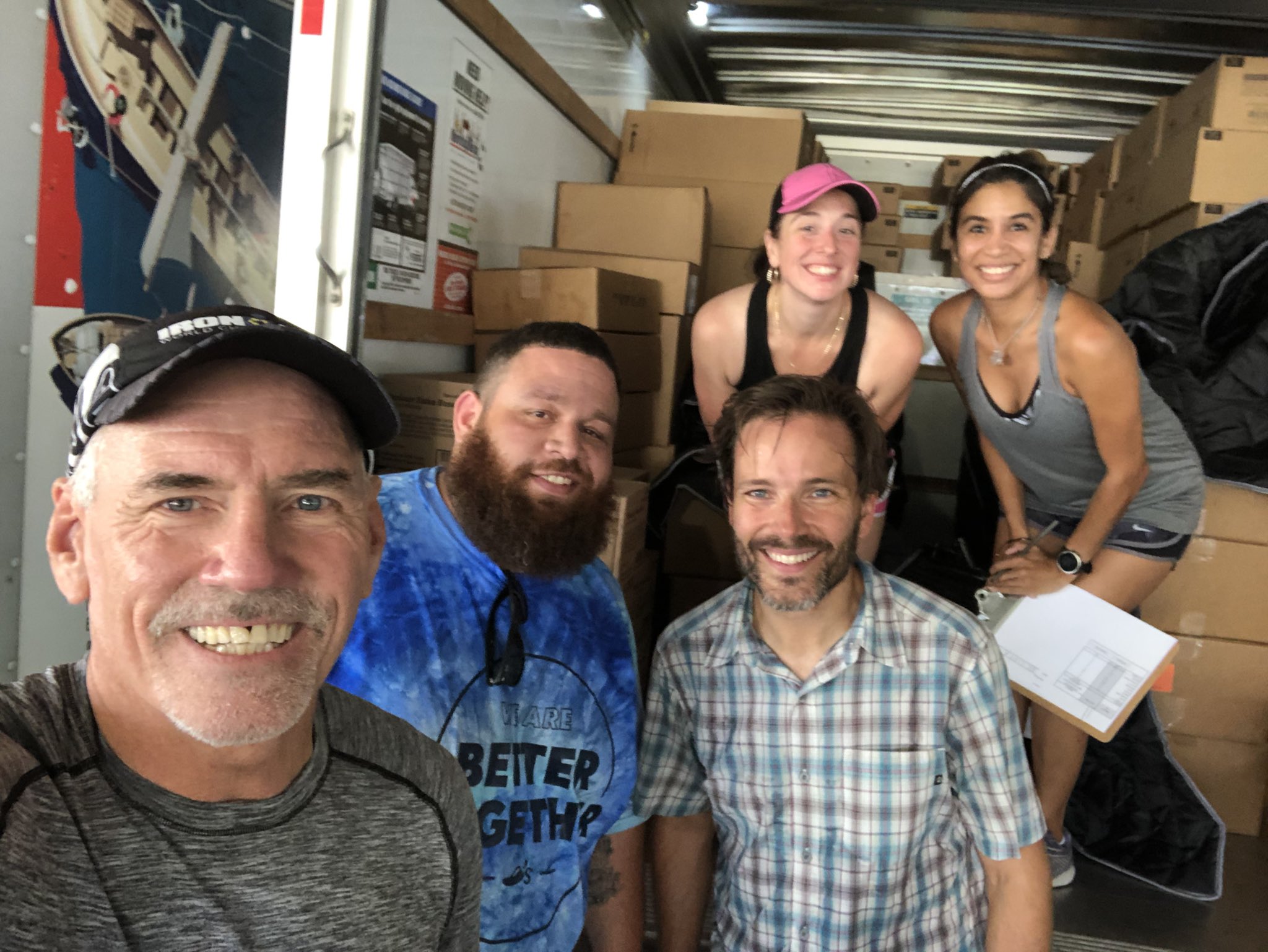 Roberts, left, and Brinker staff rented U-Hauls and delivered product themselves during a driver shortage. / Photograph courtesy of Brinker International

Technology was also the enabler for the company’s biggest pandemic-era move: the launch of It’s Just Wings, a delivery-only virtual brand that could be run out of existing kitchens and help generate sales.

Brinker had tested two other such brands, and It’s Just Wings was on deck to go through the usual pilot process. It would start in a handful of restaurants, incorporate tweaks and gradually scale up. But the pandemic made that difficult because the leadership team couldn’t travel, and it had become clear that the virus wasn’t going away anytime soon. So in the summer of 2020, Roberts did something bold: He pulled the trigger on It’s Just Wings, launching it in more than 1,000 Chili’s overnight.

His thinking: Brinker had the infrastructure to make it happen through its partnership with DoorDash. It had familiarity with virtual brands from previous tests. And it had all those kitchens with capacity to spare.

It’s Just Wings was an instant success, generating $170 million in its first year. More importantly, Roberts said, it sent the message that the chain was not going to simply hunker down, cut costs and wait this thing out—it was going to use its scale and expertise to grow.

“[t’s Just Wings] worked from a financial perspective … but just as much as a cultural statement to our people,” Roberts said.

It also proved a point in the casual-dining segment, which had long been criticized as being overbuilt.

“What we said is it’s not overbuilt, maybe it’s just underutilized,” Roberts said. “We just have to figure out how to get more out of [the restaurants] versus trying to build more and more of them.”

It’s a philosophy that has now become almost conventional wisdom in casual dining, where many big chains have launched virtual brands and other sophisticated off-premise strategies.

'The nature of the business'

These innovations, along with the arrival of vaccines and a sense that the worst had passed, really began to gel last spring. Chili’s sales turned positive again, surpassing pre-pandemic levels by 8.5% in the quarter ended in June 2021. The more upscale Maggiano’s was slower to recover, but comps had returned to their pre-pandemic baseline by the end of September. More than 30% of Brinker’s business was coming from pickup and delivery, up from the high teens before the pandemic.

“All of the things we had been doing to set ourselves up, both in the base business and the virtual brand business, started to become unlocked as the country thought they were coming out of COVID,” Roberts said.

Of course, the following months had a few more curveballs in store. Labor shortages, supply chain snarls and ballooning inflation have been enough to make any restaurateur question their career path. But Roberts said the ongoing barrage reflects what he loves most about his job.

“The thing I like about restaurants is it’s dynamic,” he said. “It’s real-time. And so I just think that it’s been more dynamic than ever before.

“We could afford to have it settle down a  little bit, but that’s just the nature of the business.”

Roberts seems to relish facing these storms head-on. Last year, when a distributor didn't have enough drivers to adequately deliver product, headquarters staff rented U-Hauls, loaded them in the parking lot and covered the last leg of the delivery themselves.

“We did that for several weeks,” he said. “That's what we had to do to get through it.”

Indeed, Brinker has stayed on its toes amid the shifting currents. To better compete for workers, it started using technology to ease the application process, which can now be done in seconds via text message. It raised menu prices about 3% to combat inflation, though not as aggressively as competitors, prioritizing traffic as it rides out what Roberts views as short-term cost pressures.

It has more workers in its restaurants today than it did before the pandemic (though “there are still pockets,” Roberts said, and the latest wave of COVID-19 cases is causing daily callouts). It has beaten the category on traffic in every quarter for the past three years. “That’s going to pay off long-term when people are more comfortable going out.”

Asked whether, knowing what he knows now, he would have done anything differently in March 2020, Roberts thinks for a moment before joking: “I would have bought a lot of steaks.”

Supply chain issues aside, Roberts has led Brinker across that bridge and into an even better place. He has no reason to look back now.