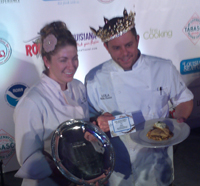 The cook-off, held by the Louisiana Seafood Promotion and Marketing Board, was part of the New Orleans Wine and Food Experience, an annual five-day festival.

Ten chefs from around Louisiana prepared one entrée apiece featuring Louisiana seafood. Each was looking to impress a panel of six judges - experienced Louisiana chefs, restaurateurs and food-magazine editors.

Aside from the seafood, use of local and seasonal ingredients were heavy themes among the dishes served:

"It was clean, simple and not over-thought," Keith Frentz said, to the nodding assent of his wife and partner, Nealy Frentz. "It's home food that people want to eat."

Keith and Nealy Frentz have cooked together for nine years. They met on the job at Brennan’s Restaurant in New Orleans, opening their own spot, LOLA, in the wake of Hurricane Katrina in 2005. Located in the old train depot in downtown Covington, La., their cuisine—like the competition winner—focuses on home-style food prepared in upscale fashion, minus the higher price tag.

"Chef Frentz's use of wild-caught Louisiana catfish was unique and the dish really showcased Louisiana seafood," said judge Chef David Guas, a native Louisianian and owner of Bayou Bakery in Arlington, Va.  "Combined with the succotash, it was a dish that was rustic and delicious."

Frentz and his wife will have a busy year ahead of them. Not only are they going on to compete in the Great American Seafood Cookoff in August, Frentz will be the face of Louisiana seafood at events throughout the year.

"It was important for me to use products from the local farmers market and wild-caught Louisiana catfish, because you don't see it very often on menus," said Frentz.  "I am really looking forward to representing Louisiana seafood in the upcoming year."