Chick-fil-A, Papa John’s and Starbucks are among the most politically polarizing brands in America, according to a survey released today by research firm Morning Consult.

The study, which is based on more than 336,000 surveys of U.S. adults, ranks brands that have the greatest difference in net favorability between Republicans and Democrats.

Media companies make up the bulk of the top 30 most polarizing brands, Morning Consult found, but when it comes to restaurant chains, Chick-fil-A ranks at No. 15, with a 33-point difference between Democrats and Republicans (about 70% of the latter hold the chain in high regard). Papa John’s comes in at No. 21, with a 24-point spread pointing toward Republican favorability. Starbucks, meanwhile, lands at No. 25. The coffee chain is viewed more favorably by Democrats than by Republicans by a 23-point difference. 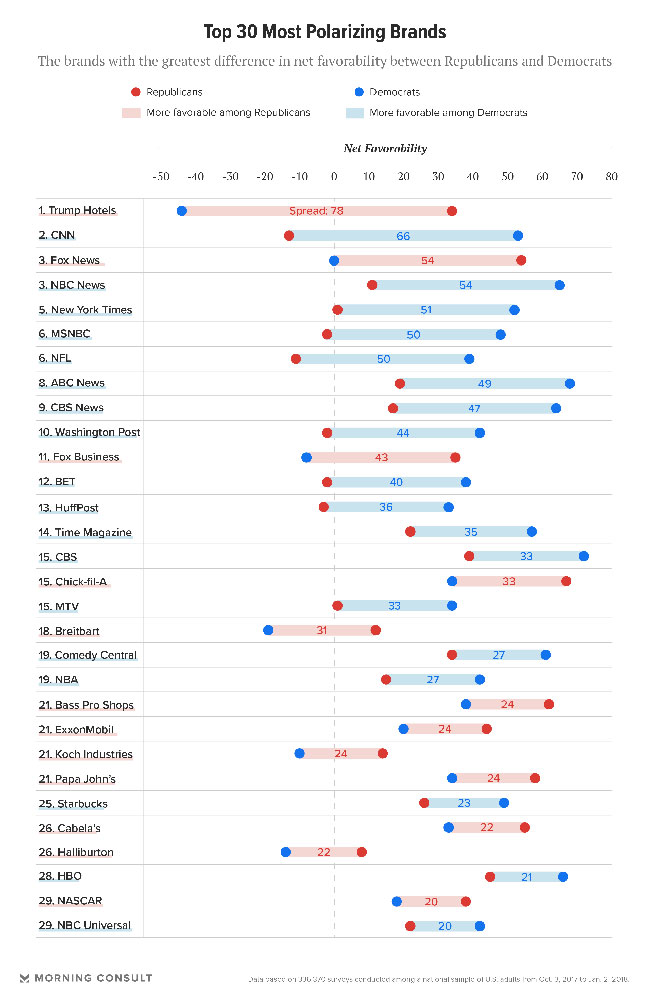 The survey also found a Republican preference for Domino’s, Little Caesars and Pizza Hut, in addition to Papa John’s.

California Pizza Kitchen was the only major pizza chain tracked by Morning Consult that rated higher with Democrats than with Republicans, though the approval percentage falls within the study’s margin of error.

In October, Restaurant Business sister company Technomic released its Restaurants & Politics Report, which found that brandwide commitment to a cause impacts guest satisfaction.

“People are interested in spending their money on things that make them feel good,” Robert Byrne, Technomic’s senior manager of consumer insights, told RB when the report was released. “If it’s going to a company that has values and acts on those values, it leads to more engagement.”