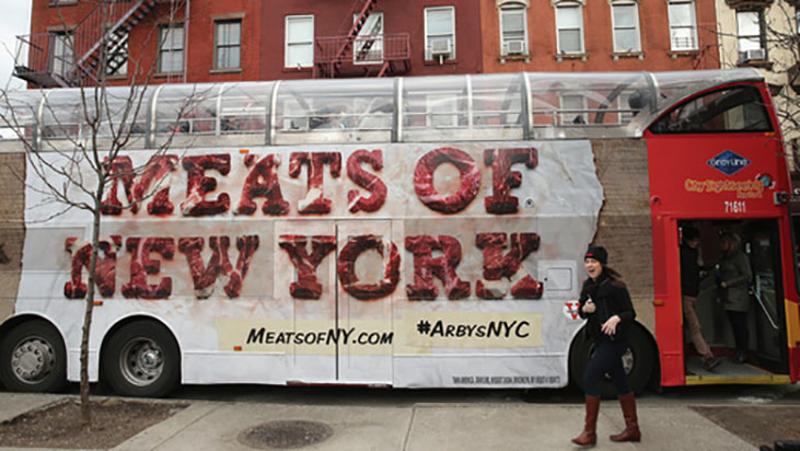 Three meat-centric tours, dubbed “Meats of New York,” were hosted as part of the Dec. 3 event—which offered media reps and consumers a glimpse inside the operations of neighborhood joints like Ottomanelli & Sons Meat Market, a family-owned butcher shop in the city’s West Village neighborhood.

With “Meats of New York,” the chain aimed to pay homage to markets and eateries that share its passion for meat, brand communications and content director Luke DeRouen said. The locations that were chosen “represent the many ways that meat is prepared, purchased and consumed in Manhattan,” he added.

Arby’s used social media and a microsite to build awareness and fill bus seats, and also encouraged consumers passing near the new restaurant’s location to register for the tours.

Highlighting mom-and-pop shops might seem a counterintuitive move for a national chain, but DeRouen said that connecting with small, local eateries demonstrates Arby’s commitment to its “Fast Crafted” positioning (akin to QSR-plus), which hinges on service, quality and providing a neighborhood spot to eat.

The tours closed at the Manhattan restaurant, which the chain has hailed as a departure from the Arby’s many consumers know. The location showcases the chain’s new “Inspire” design and features such elements as subway tile, wood elements and an updated color palette. It also offers a selection of breakfast items unique to that location, including sliders and a brisket, egg and cheese sandwich.