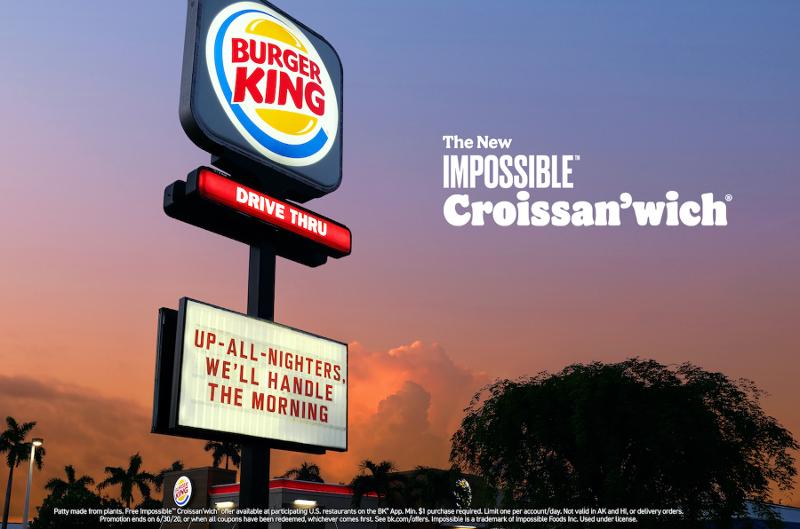 Remember when fake meat was all the rage? Those days appear to be back again.

That introduction came not long after Burger King, which is staking much of its future on fake meat, made national its Impossible Croissan’wich, which the company began testing earlier this year.

The dual announcements were big victories for Impossible Foods, of course, whose CEO Patrick Brown told CNBC this week that his goal is to make the meat industry obsolete. “That’s our mission,” he said. “That transformation is inevitable.”

For restaurants, the move represents a return to something that resembles the pre-pandemic normal, when chains were stumbling all over themselves in a race to jump on the plant-based bandwagon.

That bandwagon emptied somewhat during the pandemic, as chains pulled back their marketing and held off on new product introductions to simplify operations and hoard cash.

The announcements from Burger King and Starbucks suggest a shift in that attitude. One reason might be this: Plant-based meat sales have soared during the pandemic, and especially via delivery.

According to research company Edison Trends, plant-based meat alternative sales are up 63% over the past 11 weeks, based on orders through delivery apps such as Grubhub, Uber Eats and DoorDash, compared to the previous 11 weeks.

Yet the figures provide some evidence to back up decisions by the two fast-food giants to go big into fake meat. And it could portend a future in which restaurant chains offer even more of these products as they grow more comfortable with the long-term prospects of plant-based meat.

“If COVID can be contained as people go back indoors more and go back to work, I do think you’ll see a significant reopening of the foodservice industry,” Beyond CEO Ethan Brown told analysts earlier this month, according to a transcript from financial services site Sentieo. “And then I think things will get back to the point where they were, largely. History does suggest that we’ll get through this and get back to business.”

It’s been helpful to the market for fake meat, of course, that prices for many proteins have skyrocketed amid supply constraints as the coronavirus for a time shut down processing capacity.

In the meantime, the addition of imitation-sausage breakfast sandwiches at Starbucks and Burger King increases significantly the supply of fake meat in the morning.

Breakfast has been the daypart hurt most by the pandemic, as the concepts lost the steady supply of commuters that provided a healthy dose of sales. The companies are looking to get some of those sales back and believe breakfast sandwiches with fake meat are the way to go.

They will take on Starbucks rival Dunkin’, which late last year started selling a breakfast sandwich made with sausage from Beyond Meat.

The challenge for such chains is that they lose some momentum following an early boost in sales immediately after introduction. Chains such as Del Taco, Burger King and Dunkin’ saw sales mix of plant-based products slump over time as they lost curiosity sales.

Yet the companies are clearly still bullish on the prospects of their meat-analogue sandwiches, and the pandemic has not changed the items’ future. “We are very pleased with the Beyond Meat partnership, and we have other things in the pipeline for sure,” Dunkin’ CEO Dave Hoffmann told investors in May, according to Sentieo.