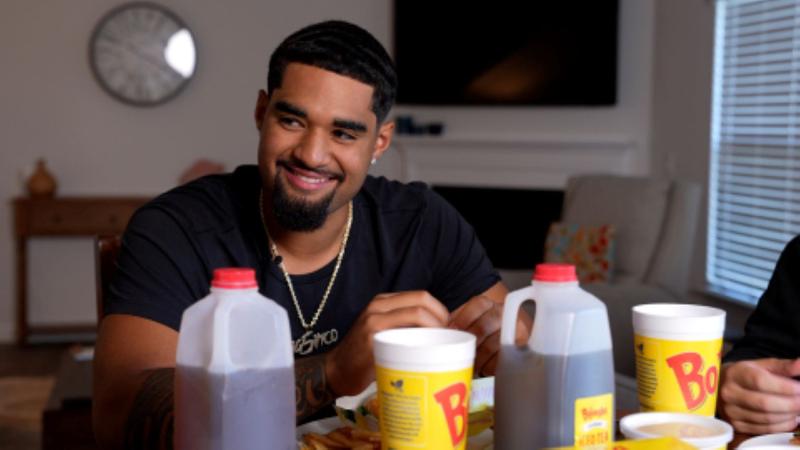 Bojangles on Thursday became one of the first major restaurant brands to take advantage of a new policy that allows college athletes to get paid for marketing deals, signing on two college quarterbacks to represent the brand.

Quarterbacks DJ Uiagalelei of Clemson University and Sam Howell of University of North Carolina-Chapel Hill have agreed to “name, image and likeness” contracts with the Southern biscuits-and-chicken chain.

“College football is a huge passion point for Bojangles and our fans, so we are excited to be able to work with the athletes that make this sport so great,” Bojangles’ Chief Brand and Marketing Officer Jackie Woodward said in a statement. “These local stars have enjoyed our delicious food to fuel their athletic careers, and we’re thrilled to officially be part of their journey.”

Charlotte, N.C.-based Bojangles said this is the first of many planned partnerships with NCAA athletes and that it is “looking to add more men and women college athletes to ‘Team Bojangles’ across its growing footprint in a variety of sports,” according to a press release.

The quick-service concept already has deals in place with schools in the Atlantic Coast and Southeastern Conferences, as well as several Historically Black Colleges and Universities, it said.

Both Uiagalelei and Howell will make appearances on behalf of Bojangles and will share branded content across their social media platforms.

“Sam is a known chicken connoisseur and a powerhouse athlete whose love for the game and serving the community line up well with who we are as a brand, and we’re thrilled to have him on Team Bojangles,” Woodward said. “And DJ is a rising star at one of college football’s most competitive and highly visible programs, so we’re excited to have him on our roster at the same time.”

Other chains are, of course, taking advantage of this new marketing possibility.

Earlier this month, Oklahoma State quarterback Spencer Rattler signed on to a "name, image and licensing" deal with fast-growing chicken-tender chain Raising Cane's. Ratler posted a picture of himself on Twitter saying he'd had a long day of playing football and noting he "had to call in Raising Cane's for the win" with the hashtag #caniacambassador.

Regional sandwich chain Runza, which is based in Lincoln, Neb., put out the call at the beginning of the month, saying it would pitch a flat-fee "name, image, likeness" deal to the first 100 NCAA athletes who signed on to the local Opendorse Deals Platform to promote the chain's rewards program on their individual social media accounts.

On July 1, the NCAA changed its longstanding rule that forbade student athletes from profiting off their names and images to an interim policy that allows students from all three athletic divisions to get paid for marketing deals.

The move creates not only a potential money-maker for NCAA competitors but also a significant marketing opportunity, particularly for regional restaurant chains, looking to enlist some star power to boost their brands without the higher paydays demanded by pro-level athletes.

It also offers a budget-minded marketing play for regional brands looking to expand their geographic footprints. Bojangles, for example, announced plans last month for significant growth in Texas with both corporate and franchise stores. Bojangles has more than 700 locations, about 400 of which are operated by franchisees.

This story has been updated to include NCAA marketing deals from several restaurant chains around the country.