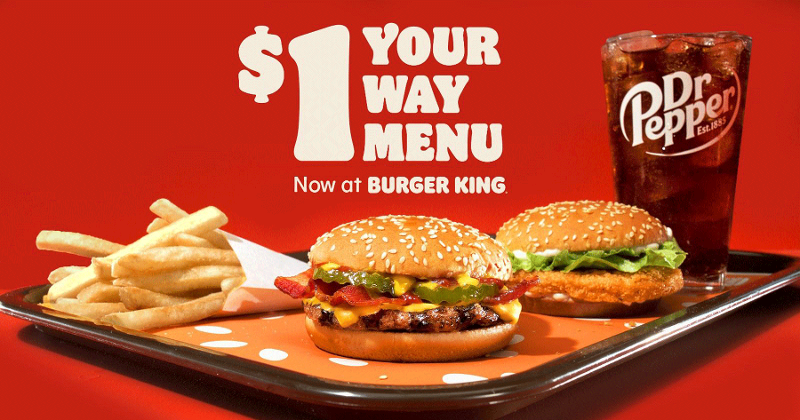 Burger King is bringing back the dollar menu.

The Miami-based burger chain on Monday kicked off marketing for its “$1 Your Way” menu with a promotion in which it will deposit $1 into select customers’ Venmo accounts between now and Dec. 28.

Burger King’s dollar menu will be available at participating restaurants and will feature a Bacon Cheeseburger, Chicken Jr., value fries and a value soft drink, each for $1. In some markets, the prices for the items may be higher.

It’s the latest sign that restaurant chains will be doing battle with value in the new year. To be sure, January is traditionally a value-focused month as consumers, broke after traditional holiday spending binges and shut in because of the weather, cut back on their restaurant spending. As such, value is traditionally a major focal point of new-year marketing.

And the economy is particularly weak heading into 2021. Though Congress is expected to pass a stimulus featuring $600 checks to much of the country—checks that will almost certainly goose restaurant sales to a degree—high unemployment and overall economic weakness could make value particularly important.

Taco Bell, for instance, is bringing back its $1 Loaded Nacho Taco on Christmas Eve, and the chain is focused intently on innovating on its menu items priced between $1 and $5. The company has long had a permanent $1 menu.

At the same time, value hasn’t quite had the pull in recent months—consumers have more cash than it appears, given the state of the economy right now, and they have fewer things to spend it on. So value offers such as Subway’s 2-for-$10 offer didn’t quite resonate as many thought.

Burger King is well-known for its almost constant value push. But it also faces some competitive challenges—same-store sales declined 3.2% in the third quarter, numbers not too surprising given the pandemic. But all of its major competitors, including Wendy’s, McDonald’s and Jack in the Box, reported same-store sales growth during that period.

“We know that value is extremely important to our guests, especially now,” Ellie Doty, chief marketing officer for Burger King, North America, said in a statement. “That’s why we set out to create a menu that offers craveable products, like our Bacon Cheeseburger, that can’t be found at the same price anywhere else.”