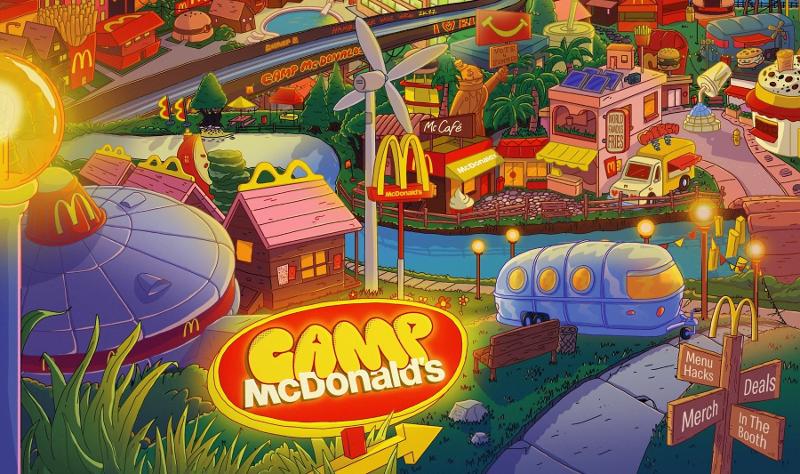 Some McDonald's customers are not coming away pleased from its "summer camp" promotion./Photo courtesy McDonald's

But just a couple of days into the summer camp’s kickoff, the burger giant is being met with a raft of unhappy campers, many of whom took to Twitter to complain about waiting hours to score a retro Grimace pool float that never surfaced.

Some customers also noted that workers at their local McDonald’s restaurants appeared to know nothing about the summer camp promo.

McDonald’s USA, in an email to Restaurant Business, blamed Grimace-gate on “issues with a third-party merch site” that kept some customers from being able to complete the merch-purch. There were no problems with the McDonald’s app, the chain said.

“We know our fans’ love for Grimace runs deep, and it was great to see the excitement around the drop of our Grimace pool float,” the chain said. “We’re reaching out to fans who tried to buy the float (Tuesday) on a first-come, first-serve basis to fulfill orders at no cost.”

On Twitter, though, the #campmcdonalds hashtag is largely being used by ticked-off customers to voice their complaints, with one saying McDonald’s “did us so dirty today” and another asking “Hey, guys, what are you doing to scam your customers today? … most magical camp experience ever!”

The lesson here? Never underestimate the public’s demand for retro merch. At more than 50 years old, Grimace has still got it, apparently.

McDonald’s, for its part, is still hoping to generate some smiles from happy campers during its July promo.

“We’re just getting started,” the burger chain said. “We look forward to treating campers to an epic lineup of food deals, menu hacks, merch drops and ‘In the Booth’ performances over the next few weeks, all hosted exclusively in the McDonald’s app.”

A free milkshake for a snip?

Score a free milkshake, through the end of July, with proof of vasectomy.

“There’s nothing like an ice-cold milkshake after a vasectomy,” owner Sean “Big Daddy” Porter said in a clip shared on the @nowthis TikTok channel (which has been viewed nearly a half million times).

The “Snip 4 Shake” deal follows the Supreme Court’s ruling to overturn Roe vs. Wade, which legalized abortion. Tennessee is one of 13 states with so-called “trigger laws,” that banned abortion upon the court’s decision.

The Daddy’s Dogs milkshake deal also applies to those who underwent a vasectomy years ago, so long as they can provide proof of the procedure.

You now have less than a week to prepare for that most sacred of holidays (and my personal favorite): National French Fry Day.

Buzzy New York City restaurant Serendipity3 is bringing back its Most Expensive French Fries on Wednesday for the occasion.

The $200 “Crème de la Crème Pommes Frites” are made of California-grown Chipperbec potatoes that are cooked three times in goose fat from Southwest France. Before that, though, they’re blanched in Dom Perignon Champagne and French Champagne vinegar. After cooking, they’re topped with Italian Pecorino and truffles, seasoned with truffle salt, and served with a Mornay sauce made of something called “udder cream,” along with black truffle butter and Gruyere-truffled Swiss Raclette. The fries are, of course, topped with 23K gold dust and served on a Baccarat crystal plate.

Meh. If you ask me, that’s gilding the lily. Nature’s perfect food needs little more than a kosher salt sprinkle. My DMs are open for all hot, fresh fry deliveries on the holy day.