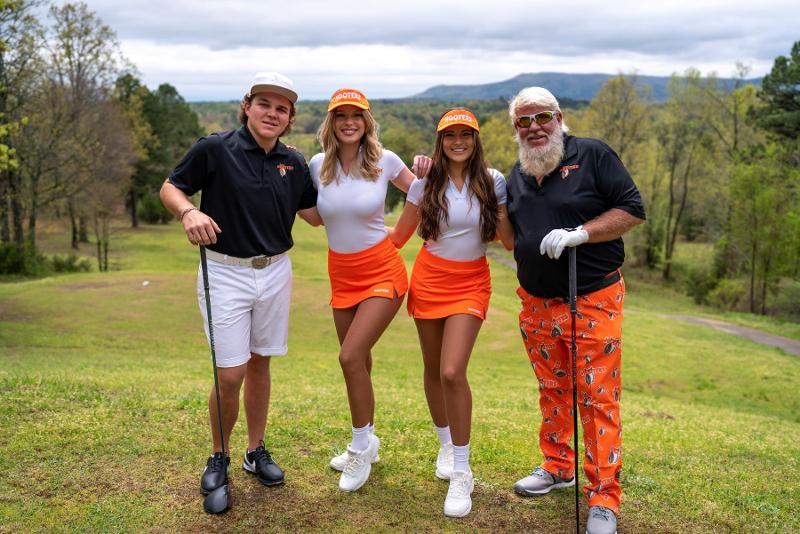 Lots of restaurant chains have jumped on the name-image-likeness bandwagon, signing on relatively unheard-of college athletes as brand ambassadors thanks to a recent shift in NCAA policy.

Hooters this week, though, is getting in on the NIL action—but the name of the breastaurant brand’s new ambassador is far from unknown, especially to golf fans.

The chain signed pro golfer John Daly, a longtime Hooter’s superfan, to a multi-year sponsorship deal, along with his son “Little John” Daly II, a freshman golfer at the University of Arkansas.

“Our goal for the name-image-likeness deal is to raise the awareness with a new set of consumer demographics that currently are not aware of our brand or following our brand or engaged with our brand,” Bruce Skala, Hooters of America SVP of marketing told me.

The younger Daly already has a following and a name, Skala said: “It’s instant recognition.”

Plus, the elder Daly has long been a Hooters fan, signing autographs and selling merch in the parking lot outside Hooters during the Masters tournament in Augusta, Ga., for decades.

Under the new deal, Daly will tote a bright orange Hooters golf bag on the PGA Tour Champions circuit and will wear branded golf apparel. Daly II will star in social media campaigns for the brand, wear branded apparel during select (non-NCAA) tournaments and make appearances at Hooters locations.

Through his long golf career, the elder Daly, with his shaggy hair and long white beard, has carved out a persona outside the typical country club golfer. Skala said that image is a good fit with Hooters.

Yes, I know I wrote about 4/20 last week. But it’s worth bringing up the unofficial weed celebration, which happened Wednesday, one more time this year.

Every year, we get the pitches for 4/20 LTOs and other marketing promos but, at least anecdotally, they seemed even more prevalent this year.

It’s understandable: More states are legalizing recreational marijuana usage, and the day is becoming a big traffic day—particular for quick-service brands that cater to munchie-seekers.

Grubhub, for example, reported that it delivered 22,000 orders of fries on 4/20 of 2021, along with 1,800 servings of chicken wings. The third-party delivery provider this year offered a variety of $4.20-off deals for chains such as Cosmic Wings (from Applebee’s), Jack in the Box, Popeyes, White Castle and more.

Ben & Jerry’s, which operates scoop shops in addition to selling its pints of ice cream in retail locations, came out with a rare serious stance among restaurant chains regarding 4/20. The brand joined forces with the American Civil Liberties Union to urge the senate to pass the Marijuana Opportunity Reinvestment and Expungement Act to push for cannabis decriminalization.

“Hundreds of thousands of people are still arrested every year for possession or are still locked up for past convictions—and they are disproportionately Black,” Ben & Jerry’s said in a statement. “To put it simply, our cannabis laws are half-baked.”

Shaquille O’Neal is sticking with Papa John’s, thanks to a new three-year endorsement deal worth more than $11 million in cash and stock.