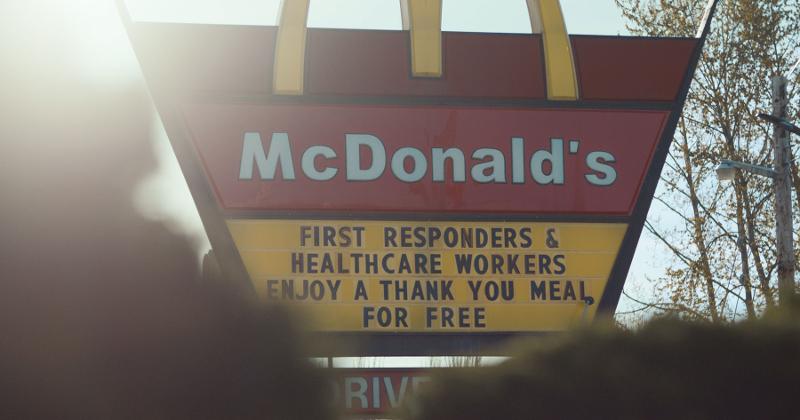 McDonald’s on Tuesday joined a host of other restaurant chains that have been offering free meals to front-line workers during the pandemic as the company and its franchisees start giving away food to emergency and healthcare employees over the next two weeks.

The chain will start giving out “Thank You Meals” to healthcare workers, police officers, firefighters and paramedics starting Wednesday through May 5.

The meals will be available during breakfast, lunch and dinner and will feature a choice of sandwiches, drinks and either a small french fries or hash browns. They will be served in the chain’s Happy Meal boxes and will come with a thank-you note.

The company is helping to fund the meals, which were unanimously endorsed by the chain’s franchisees, who operate about 95% of McDonald’s U.S. locations.

“The owner-operators are definitely in partnership with McDonald’s corporate,” Vicki Chancellor, an Atlanta-based franchisee who chairs McDonald’s Operator’s National Advertising Committee, said on a conference call with reporters on Tuesday.

She noted that the votes from McDonald’s 56 franchisee cooperative groups were all in favor of the program, a rare unanimous show of support. “Even though we don’t require operators to participate, we have 100% participation,” Chancellor said.

McDonald’s is supporting the program with a pair of advertisements and is devoting all of its media to the program for the next two weeks. “We feel it’s such an important message,” said Morgan Flatley, McDonald’s U.S. chief marketing officer. “We want to be sure it gets out and people are aware of the offer and what we’re doing.”

McDonald’s move comes as the chain has faced intense scrutiny from workers, labor groups and even its own franchisees over the company’s response to the virus.

Workers in several states have staged strikes and walkouts, protesting a lack of safety equipment such as masks and gloves. Many of the strikes have been organized by labor groups backing unionization efforts for fast-food employees.

On the call, McDonald’s reiterated safety steps it has been enacting in recent weeks. That includes requiring workers to wear gloves and erecting plexiglass barriers in the drive-thru window and at the front counter. It is also requiring wellness and temperature checks to make sure workers aren’t sick. The company has also sourced 100 million masks.

McDonald’s efforts to convince operators to take more concerted steps to protect employees came out earlier this month in a dispute between Erlinger and the National Owners Association, an independent group of franchisees that was formed in 2018. The sides were negotiating aid from the company to its franchisees, which the association feels doesn’t go far enough.

In his letter to the association, Erlinger urged the group to endorse wellness checks and “hero pay” for employees working during the crisis, among other things.

“Imagine the brand impact such moves would engender,” Erlinger wrote. “Overnight, McDonald’s could transform our employer reputation and customers’ perceptions.”

On Tuesday, however, McDonald’s and its operators demonstrated a unified front behind a promotion aimed at rewarding first responders. Numerous restaurant operators, from local restaurants to major chains, have been offering free meals to hospital and other workers during the crisis.

In this instance, McDonald’s is helping franchisees pay for free meals to healthcare workers and first responders and putting its marketing might behind the effort.

“This is a team effort,” Erlinger said. “It’s a partnership between the company and its franchisees. That works best.”

McDonald’s has frequently made donations and has taken other steps to help communities hit with disasters, but Erlinger said this is the biggest such effort he can recall in more than 20 years with the company.

Healthcare workers in uniform or with a work badge are eligible for a Thank You Meal. Morning meals feature a choice of Egg McMuffin, Chicken McGriddle or Bacon, Egg and Cheese Biscuit with a hash brown and a drink.

The lunch meal features a Double Cheeseburger, 6-Piece Chicken McNuggets or Filet-O-Fish with small fries and a drink.

“We’re grateful to healthcare workers,” Erlinger said. “Many of these first responders have been loyal customers to McDonald’s for decades.”