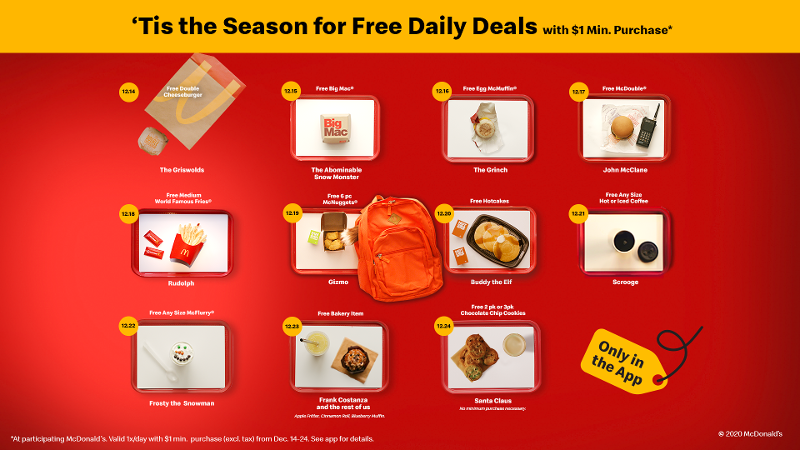 McDonald’s is coming out with a holiday-based take on its celebrity orders platform, giving away different menu items with purchases made through its mobile app from Monday through Christmas Eve.

Every day during that time, the company will feature a different holiday character, giving away the menu item the characters crave, culminating on Dec. 24 with free chocolate chip cookies for Santa Claus. The menu items are free with a minimum $1 purchase. Characters include Rudolph the Red Nosed Reindeer, the Abominable Snow Monster and Scrooge.

“After a year like 2020, I think we could all use some extra cheer this season,” McDonald’s U.S. Chief Marketing Officer Morgan Flatley said in a statement.

In addition, daily in-app deals will celebrate characters from classic holiday movies like National Lampoon’s Christmas Vacation, Gremlins and Die Hard. “Yes, Die Hard is a holiday movie,” the company said in a release, firmly placing McDonald’s on the correct side of the social media debate over the Bruce Willis-starred action movie.

All offers during the promotion require a $1 purchase through the app and will be activated through Mobile Order and Pay. The deals are featured in the deals section of the app.

The holiday marketing program is designed to promote usage of the company’s mobile app, and follows its celebrity signature orders platform that proved to be a hit this fall—starting with the Travis Scott meal and followed by the J Balvin Meal in October.