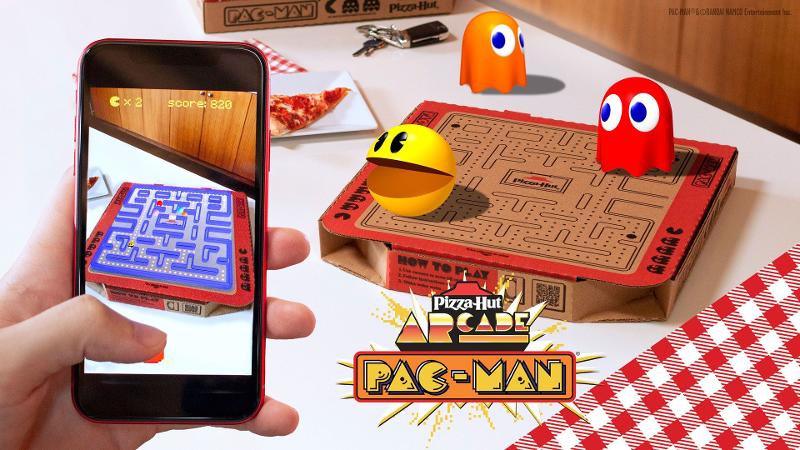 The Plano, Tex.-based pizza chain on Monday revealed a campaign designed to tap into nostalgia for the '80s when its dine-in restaurants were particularly popular.

The company has designed its pizza boxes with the classic Pac Man maze, which can be paired with an app that allows customers to play the game using augmented reality.

The game is at the center of a “Newstalgia” campaign that “puts a contemporary twist on all things people love and associate with the brand,” including “Book It” pins (for the chain’s popular book reading club), arcade games, red cups and Tiffany style lamps.

The chain has a new spokesman in comedian/actor Craig Robinson, who plays a retro Pac Man game along with Pizza Hut’s $10 Tastemaker pizza.

The game is designed to serve as a reminder of the days when kids would play video games while waiting for their pizzas to arrive at the table. The boxes have a QR code customers can scan to get the “AR Pac Man” game.

“Pac Man’s design and creation was inspired by the shape of a pizza with a slice taken out of it, making this partnership so appropriate for the Pac Man brand,” Yutaka Fuse, head of licensing and branding for Bandai Namco Entertainment, which owns the Pac Man brand.

Robinson will be the face of Pizza Hut and the campaign for the rest of the year—he will play a “kid at heart” in the TV spot “Dots.”

“Everyone has their own special Pizza Hut memory,” Robinson said in a statement. ‘Growing up in the ‘80s, mine was going into Pizza Hut and devouring those Pac Man dots just like I did my pizza. Those arcade games in the restaurant—there was nothing better as a kid.”

For Pizza Hut, the campaign is a reminder of the chain’s heyday, when its dine-in restaurants were popular destinations for pizza loving customers. In recent years, however, the chain has closed many of the locations as consumers have shifted their pizza dining to takeout and delivery.