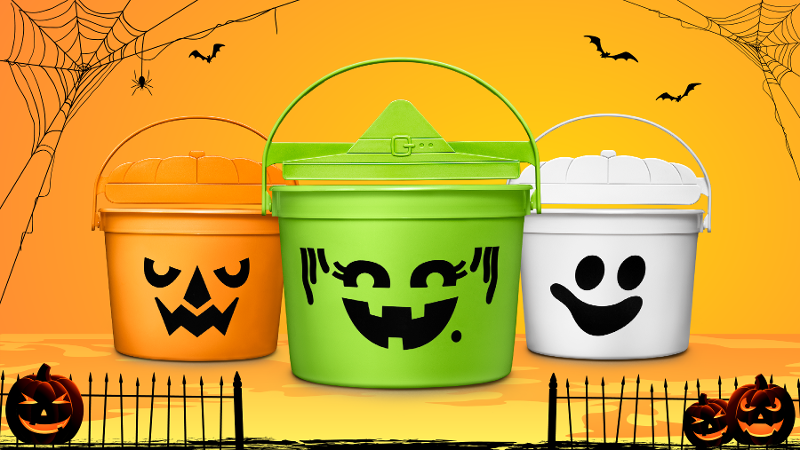 McDonald's teaching kids an important lesson: You can never have enough buckets. / Photo courtesy of McDonald's.

Editor’s note: Heather Lalley, the former author of Marketing Bites column, has gone off to greener pastures at Winsight Grocery Business. But we just like this bit too much to get rid of it. So you’re stuck with us.

Restaurants have either run out of ideas or they’re feeling nostalgic these days, at least based on some of the marketing we’ve seen lately.

Case in point: McDonald’s is bringing back its Halloween Pails. The burger giant will hand out the little buckets as Happy Meal holders starting Oct. 18 through Oct. 31.

There are three versions of the pails, which kids theoretically use to collect candy from strangers on Halloween. They include McBoo, designed like a ghost, McPunk’n, which is exactly what you think it looks like, and McGoblin, which is green.

The pails were first introduced in 1986 and were an annual tradition this time of year until some genius decided to end that idea in 2016. But, apparently, some fans of the buckets continued to use them for décor, planters or musical instruments.

But McDonald’s isn’t the only one bringing back old ideas. Burger King brought back its classic commercial jingle, “Have It Your Way,” in a new series of ads with a decidedly new tagline, “You Rule.”

Brands have been bringing back some of their older ideas, hoping to tap into consumer nostalgia or old brand equity. That is certainly the case with Burger King, which has been eager to tap into its golden era of the 1970s and 80s when that “Have It Your Way” jingle was all over the place and its customized burgers made life more difficult for rival McDonald’s.

The company hoped to tap into nostalgia for adult consumers who loved Happy Meals as kids and still wanted a toy but were a bit too old for whatever non-plastic item they come with these days.

While people are not all that familiar with the streetwear maker Cactus Plant Flea Market—“Did you order the box thing?” my McDonald’s employee asked me—they certainly get the idea of four-eyed Grimace figurines. Some workers are going so far as to “beg” people to stop ordering the meals. And a few locations have run out of them.

By the way, I got the Hamburglar.

This is going to shock you but Chick-fil-A and In-N-Out have the strongest customer loyalty scores, according to a recent survey.

Chick-fil-A came out on top, according to Market Force Information’s 2022 report on the quick-service and fast-casual restaurant market. The chicken chain had a score of 84%. In-N-Out, the California-based burger chain, had a score of 82%. Both saw loyalty increase by more than 5%.

Chick-fil-A also dominated the quick-service chicken category with what Market Force called “wallet share,” which measures how much consumers spend at the brand as opposed to its competitors. Chick-fil-A’s was 58%.

The conclusion: Build customer loyalty by creating a restaurant brand with dashes in its name.

Two of my colleagues at Restaurant Business have unfortunately decided to be fans of the New York Yankees professional baseball team. And they’ve been quick to remind me that a certain gentleman by the name of Aaron Judge set an American League record with his 62nd home run on the season.

So, I decided to make both of them jealous by being the only editor who will write about said accomplishment in this particular publication.

In this case, the pizza chain Home Run Inn gave away a free pizza to anyone named Judge on Wednesday and Thursday. Apparently, Peter Romeo is now Judge Romeo.

So why didn’t I think of this? So, this isn’t specifically restaurant related, but it is marketing related: You know Liquid Death, the company that decided to can water, give it a badass name and charge a bunch of money for it? That company has a valuation of $700 million.

If you need me, I’ll be bottling water and calling it Fantasy Fluid.

Got some marketing tips you think I should write about, or want to invest in Fantasy Fluid? Shoot me an email.