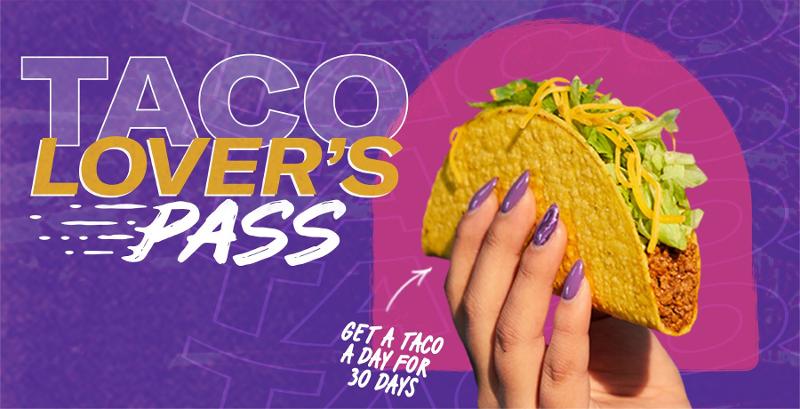 Customers willing to eat a taco a day could get up to 30 tacos for $10 under Taco Bell’s new “Taco Lover’s Pass,” which makes its debut Thursday on the company’s mobile app.

“Tacos are in our DNA,” Zipporah Allen, chief digital officer at Taco Bell, said in a statement. “It’s a fun way to continue offering unique ways to reward our most loyal fans through our digital access points.”

Customers can purchase the pass through the app. After buying the pass, a secret category will unlock on the app menu, allowing customers to choose a taco and redeem in the restaurant.

The Taco Lover’s Pass was tested in Tucson, Ariz., in September.

The test helped bring in new loyalty members, a key goal for the chain at a time when such programs help generate more spending among loyal customers while giving companies valuable information about their habits.

Taco Bell said 20% of its pass buyers in the test market were new to the Taco Bell Rewards Program. The company also said 20% renewed the pass a second time. The Doritos Locos Tacos Supreme was the most redeemed taco.

Subscription programs have become more popular in recent years, with chains like Burger King and Panera Bread trying coffee subscription programs while BJ’s Restaurants debuted a beer club. Such programs provide companies with a revenue stream while encouraging customers to come in to the restaurants more frequently.