The publicity benefits of hiring military vets may be as obvious as this story. But many restaurant leaders have a more vivid reminder of the business payback. All they have to do is think of their executive teams past and present—if not their own resumes. 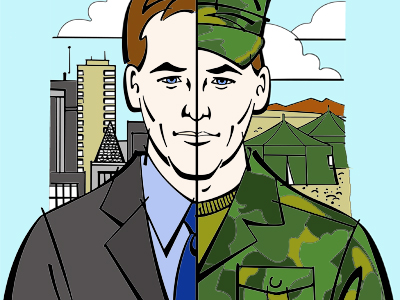 A career arc from service to foodservice has been common in the business since its post-World War II boom years. Time in uniform figures prominently in the development of such industry legends as Steak and Ale founder Norman Brinker, Red Lobster godfather Joe Lee, and burgermeister Carl Karcher. Ray Kroc, the Big Mac himself, was too young to serve in World War I. But he conned the Red Cross into letting him drive ambulances during the conflict.

More recently, the roster of vets-turned-restaurateurs has included standouts like Jim Skinner, who spent 10 years in the Navy before joining McDonald’s, where he stepped down as CEO and vice chairman at the end of June. Roland Smith, who headed Arby’s and Wendy’s until they were parted, graduated from West Point.

Craig Miller, who suspended a long career as a chain executive to run for Congress, was a staff sergeant in that conflict. Tasti D-Lite principal and CEO Jim Amos earned 12 commendations for his in-country service as a captain in the Marines.

The strong correlation between military service and standout restaurant success is no surprise to vets who are still active in the business. They see the military, with its emphasis on training, leadership, resourcefulness, responsibility, and following a chain of command, as a near-perfect whetstone for a chain executive’s skills.

“There is no doubt in my mind that my military service has made me a better restaurant professional,” notes Steve Devine, who served on U.S. naval ships for 11 years before becoming executive vice president of franchise development for Johnny Rockets.  Now, with the retro-diner chain revving up expansion, Devine is working with the International Franchise Association to develop a program for recruiting more vets as franchisees.

“The military gives you the skills to succeed not only in business, but in life,” comments Amos, who lead a buyout of Tasti D-Lite in 2007 and has since added Planet Smoothie to his fold. “There are really just two objectives for the military. One is to train soldiers, the other is to grow them into leaders. Those two things are going to make you a better executive in any field.”

Plus, “no matter what role you had in the service, you had a lot of responsibility at a young age.  You understand the concept of a team and leading a team,” he adds.

And there are aspects of service that leave vets unfazed by some of the more grueling challenges of running restaurants, like averting chaos at the peak of the dinner rush on a Friday night.  Before Mother’s Day. During a kids-eat-free promotion.

“Combat experience can kind of guide you through the rough and tumble when things get tough,” says Amos.

“I learned a lot about hands-on management because you had to do a lot on the fly,” agrees Salsarita’s Friedman.

It’s almost as if the military re-engineers a young person’s DNA to make them the stuff of foodservice success. “From the attention to detail that is instilled in a military member from Day One of boot camp to the sense of teamwork and camaraderie that follows you through a military career, military service helps to form the foundational skills that are most necessary for success in the restaurant business,” explains Johnny Rockets’ Devine.

He sees that acumen filtering down to the industry’s rank and file, just the way a standout officer can leave on imprint on the soldiers under his command.

“The restaurant industry is a first job for a high percentage of Americans,” notes Devine, “and the leadership abilities that are brought over to the private sector by military veterans helps to mold and shape the future of a lot of restaurant employees.”

Look for a lengthier list of veterans-turned-restaurant-successes in the August issue of Restaurant Business magazine.