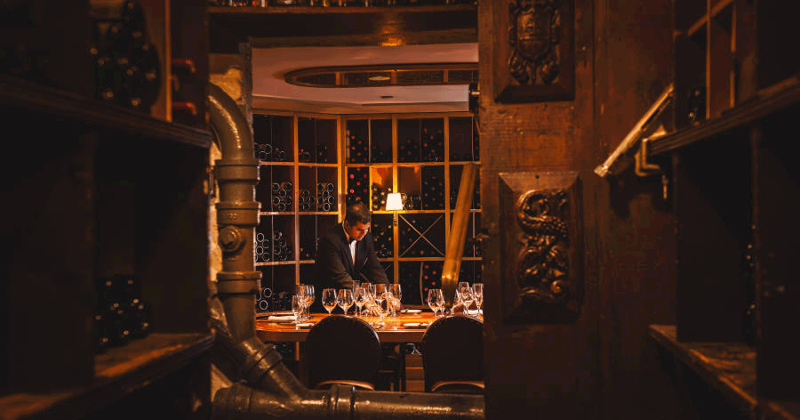 The 21 Club, the one-time speakeasy that reigned for 90 years as a choice dining spot for New York City celebrities and powerbrokers, has closed “indefinitely” because of the slowdown in sales during the pandemic, the landmark fine-dining institution alerted New York regulators on Friday.

The WARN filing was followed two days later by an announcement that San Francisco’s Cliff House, the 157-year-old icon that generated $14.5 million in sales during 2019, will shut its doors for good as of Jan. 1.

Many celebrated fine-dining establishments have served their last pat of butter during the pandemic, but few boast the storied pasts of 21 and Cliff House.

The former started as a joint in Greenwich Village in the ‘20s called the Red Head. Its founders, Jack Kreindler and Charlie Berns, hopped from one location to another in the city until they settled on the current W. 52nd Street site in 1930.

The place was a full-fledged speakeasy, right out of a movie. The location was designed in anticipation of raids, with levers that would tip bar shelves backward to send bottles down a chute and into city sewers as the police charged in. A secret door led to a hidden wine room that was later put into use as a private dining space for the restaurant’s famed celebrity clientele.

Frank Sinatra was a regular. So was John F. Kennedy, who donated a toy-sized replica of his PT-109 Navy vessel to hang from the rafters of the establishment’s bar. The basement area’s ceiling is covered in toys and memorabilia donated by patrons.

Upstairs, banquettes and a dark-wood dining room provided a place for the likes of Elizabeth Taylor, Al Jolson, Mae West and Jackie Onassis to dine on classic continental fare in relative privacy, though their visits often figured into gossip-column entries the next day.

Kreindler and Berns’ descendants would continue to run the place until 1985, making occasional concessions to more modern tastes on the menu and in its décor. Yet it proudly reigned as a piece of old New York; men weren’t allowed to forego neckties until 2009, and the place stocked an array of gaudy sports coats to meet the requirement that males wear jackets. Sneakers were still forbidden at the time of the WARN filing last week.

The two clans sold the property in 1985 to operators who continued in the same vein. As fine-dining loosened up, the new owners adjusted to changing preferences, but opted to sell the place again in 1995, this time to a company affiliated with the Orient Express, Europe’s famed train line. Orient-Express Hotels Ltd. Morphed into Belmond Ltd., which still owns the restaurant today.

The original Cliff House, according to its deep lore, might or might not have been built in 1858 with lumber salvaged from a ship that crashed on the rocks below the restaurant’s seaside perch;  the reports have never been verified. Historical records are clear, however, on a restaurant and inn called the Cliff House opening in 1863, or two years before the end of the Civil War. Because the property was located near a race track where the city’s well-to-do enjoyed running their horses, it became a favorite of the local carriage trade in the literal sense of that term.

It was almost destroyed in 1887 by a dynamite explosion caused by the crash of a ship near the site—only to be completely leveled by a fire seven years later.

The rebuilt Cliff House would chug along for more than 100 years, adjusting to the times but enjoying its distinctions as one of America’s oldest dining establishments. In 1977, it became part of the Golden Gate National Recreational Area, which remains its landlord.

The restaurant said in a website posting on Sunday that a failure to hammer out a new lease agreement figured into management's decision to close, though the prime factor cited was a drop in sales due to the pandemic.

The landmark announced its closing on its website Sunday.

The restaurant is ranked Number 71 on Restaurant Business’ranking of the 100 highest-grossing independent restaurants in the United States.