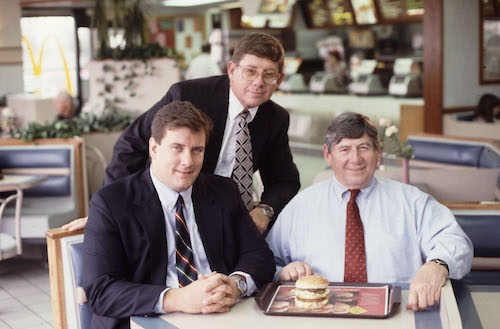 A person who works at McDonald’s is sometimes known within the company for having “ketchup in their veins.”

Nick Delligatti has Special Sauce in his.

Delligatti is the great-grandson of Jim Delligatti, the Pittsburgh-area McDonald’s franchisee who in 1967 put two burger patties on a three-part bun, added lettuce, pickles, cheese, onions and a secret “Special Sauce.” 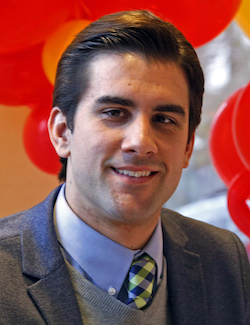 The Big Mac would go systemwide the next year, becoming the chain’s signature sandwich and putting Jim Delligatti in McDonald’s lore forever: His picture is among the chain’s key figures that adorn a special wall near the lobby of the company’s new Chicago headquarters.

“I’ve always had a passion for the restaurant industry, and McDonald’s has been part of our family for 60-plus years,” Nick said.

The Delligattis as a family operate 20 locations. Nick’s father and his uncles are in the system, so Nick literally grew up inside a McDonald’s location.

And despite his family’s lineage, Nick Delligatti did not get a break. He worked his way up, just like anybody else.

He started as a crew person working inside the restaurants over the summer and throughout college. He was a manager for a couple of years, then a general manager for two years before he was promoted to supervisor over a couple of restaurants, which he did until recently, when he got his own location an hour south of Erie, Pa.

“I went through the ranks,” Nick said. “My father worked me. He was not light with me.”

Many legacy systems are facing turnover as older operators retire and get out of the business. Chains such as Wendy’s and Burger King, among others, are in the midst of some operator turnover, in part because in many cases these owner-operators don’t have children who are willing to take on the family business. So the restaurants get sold instead of passed down to the next generation.

To be sure, Nick Delligatti is not exactly rare. Entire chains, in fact, have remained in the family for multiple generations, such as White Castle and In-N-Out. But for chains that can keep the next generation involved, it provides some continuity even as it injects new blood into the system.

Nick Delligatti said there was nothing else he’s ever wanted.

“I was always around McDonald’s growing up,” he said. “I never really had a passion for anything else. Every day is different, always innovating and coming up with new ideas. I’ve just enjoyed it.”

There’s some pressure to be in that family. “I’ve got a lot of big shoes to fill,” Nick said. “But I’m confident. I’ve had a lot of great mentors.”

“He put me to work every day,” Nick said. “He was my mentor through everything.”

That said, it can be hard to get away from work.

“Sometimes it’s a little tough during family gatherings to turn the business off,” Nick said. “People always have something to say.”

Jim Delligatti is proof positive of the impact a single franchisee with a good idea can have on a system.

His idea would not only help fuel McDonald’s immense growth in the 1970s and 1980s, but it also became a symbol of fast food and even America itself. The Economist uses the Big Mac as the reference point to determine the cost of living in different countries. It’s called the Big Mac Index.

McDonald’s is celebrating the Big Mac’s 50th anniversary later this month. Perhaps not coincidentally, this Thursday would have been the late Jim Delligatti’s 100th birthday.

“My great-grandfather, he was always an innovator and always willing to take risks, and see what he can do for the system,” Nick said. “Maybe I’ll make the next big item on our menu.”