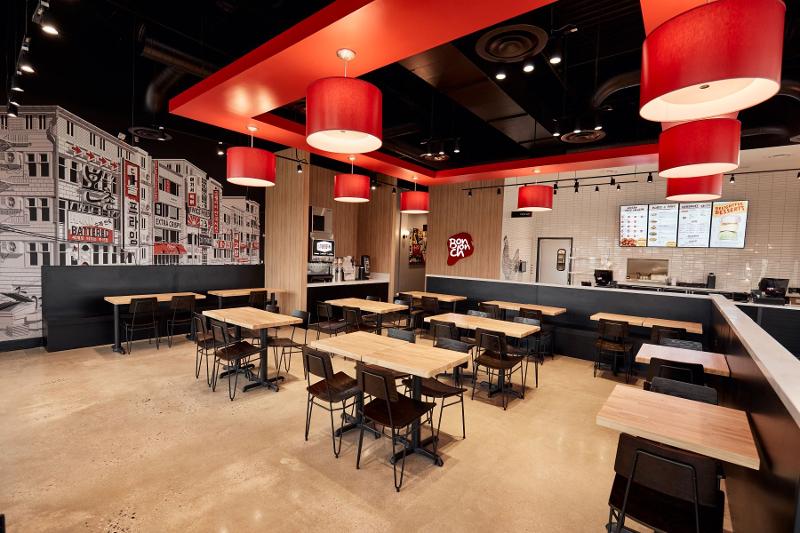 For almost all of that time, Bonchon has operated as a full-service concept. In recent months, though, the chain has been finding success with a fast-casual service model at a couple of its units.

Today, just two of Bonchon’s 112 U.S. stores are fast casuals. In 12 months, though, about 20 locations are slated to be limited service, Greg Buchanan, the chain’s SVP of development, said.

“When you look at our menu, with the chicken focus as well as the wing focus, it’s very conducive to a fast-casual service style,” Buchanan said. “We’re really trying to address consumer demands and desires of how they use the restaurant industry today.”

Even at its full-service restaurants, about 45% of Bonchon’s business was off-premise pre-pandemic. That number, of course, rose as most dining rooms were shuttered on and off throughout 2020.

Bonchon started considering a fast-casual prototype before the pandemic, he said, seeking to give franchisees an alternative format option.

The fast-casual footprint is about 1,000 square feet smaller than a full-service Bonchon—anywhere between 1,700- and 2,300-square-feet. The fast casuals have about 40 seats, as well as benches for people who are waiting to pick up to-go orders.

The fast casual Bonchons have a scaled-down menu that focuses on double-fried Korean chicken and wings; a chicken sandwich that’s not currently on the full-service lineup; a few popular entrees; and new sides such as a Korean-inspired riff on mac and cheese.

“We’ve set up a more efficient kitchen, so we are seeing some savings in the back of house and, of course, we don’t have any servers, so it’s a smaller labor footprint,” Buchanan said. “We want to give our franchisees options.”

Bonchon has a reported average unit volume of $1.4 million, which the fast-casual units are hitting, he said.

“That was really the first goal,” he said. “We didn’t want to reduce our sales volumes in these units with a more streamlined menu.”

Even before the pandemic, a number of full-service chains were eyeing fast-casual offshoots. For example, Hooters is expanding its Hoots Wings quick-service brand, Outback has its Aussie Grill concept and Texas Roadhouse is growing Jaggers.