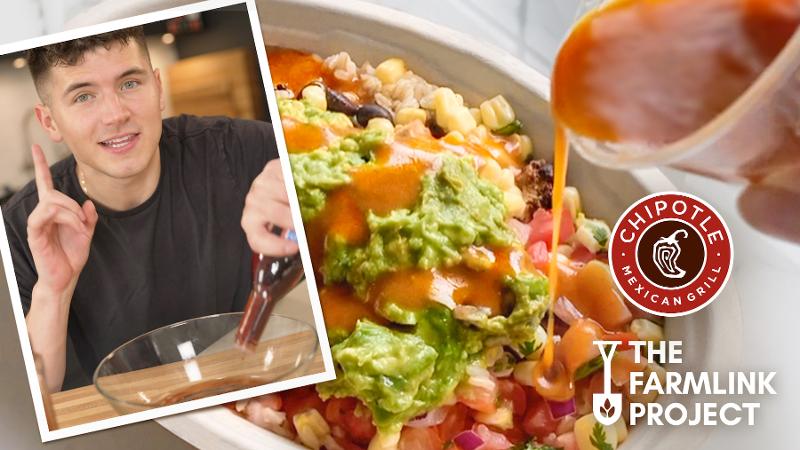 Chipotle on Wednesday asked fans to donate to the Round Up for Real Change program to support The Farmlink Project, an organization that directs produce to food banks that serve communities in need.

And if the 20-million-pound goal is met, with the help of Chipotle fans giving their extra change through Round Up, then the fast-casual chain will reveal its vinaigrette recipe, with the help of TikTok chef Nick DiGiovanni, who many might know as the youngest-ever finalist on “Master Chef” season 10. He also has some 20 million followers across social media platforms. And he’s a Farmlink ambassador.

Chipotle’s vinaigrette alone has a solid fan base, the company said.

All Chipotle fans have to do is round up their payment when ordering through the app or online. They can also donate Chipotle Rewards points to support Farmlink, and Chipotle said it will match point donations through Jan. 31.

Chipotle is working with Farmlink to route donations to the top 20 markets for food insecurity, including Albuquerque, N.M., Indianapolis, New Orleans and Augusta, Ga. The chain began supporting The Farmlink in 2020 and has since enabled the donation of more than 40 million pounds of produce. This fall, for example, Chipotle helped The Farmlink donate 185,000 pounds of food to Fort Myers, Fla., after Hurricane Ian hit.

“Chipotle is a clear restaurant leader in local sourcing, buying over 35 million pounds of local produce in the last year alone,” said Chris Brandt, Chipotle’s CMO, in a statement. “We are proud to partner with The Farmlink Project to help them deliver fresh produce to food banks and help feed those in need this winter.”