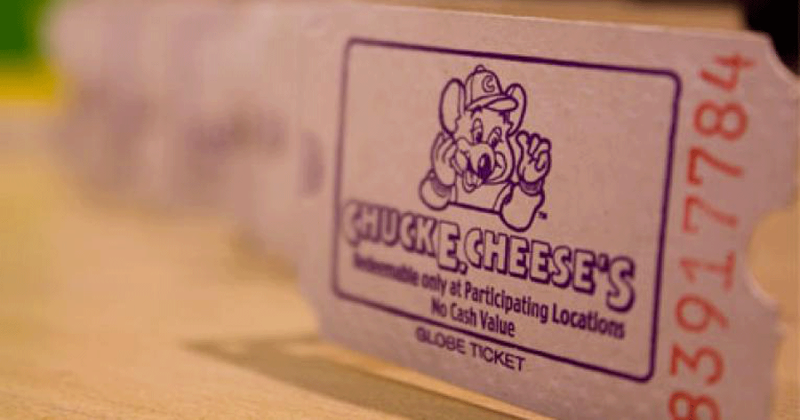 In fact, Chuck E. Cheese parent CEC Entertainment is seeking to dispose of 7 billion of those paper prize tickets—enough to stuff 65 40-foot cargo shipping containers, according to a request filed Tuesday in a Texas bankruptcy court.

The move is a result of “the unprecedented and rapid falloff in sales” caused by the coronavirus, CEC Entertainment said in the filing, prompting a “buildup of Prize Tickets at various stages” throughout its supply chain.

CEC Entertainment has reached agreements with three of its suppliers to pay for and destroy the unwanted tickets for about $2.3 million, according to the filing. That’s about $1 million less than the cost of circulating them. If the 7 billion tickets made their way into the pizza-stained hands of game-playing children, they could be redeemed for approximately $9 million in prizes.

“Since Prize Tickets are redeemable by guests at significantly higher value than the cost of Prize Tickets, the Debtors believe it is in the best interests of the estates to mitigate any risk of these tickets being circulated to the general public,” CEC Entertainment’s attorneys wrote in the document.

The chain also plans to eliminate its “ticket munchers” that collect and count tickets, the filing said.

The company is reserving about 2,500 cases of prize tickets for franchisees.

Chuck E. Cheese is also moving to introduce electronic prize tickets as it rolls out contactless operations at its 612 locations amid the pandemic, the chain said.

Irving, Texas-based CEC Entertainment, which is also the parent company of Peter Piper Pizza, declared bankruptcy in June, saying it faced more than 50 lawsuits from landlords over missed rent payments or lease terminations.

A hearing on the case has been scheduled for Monday.