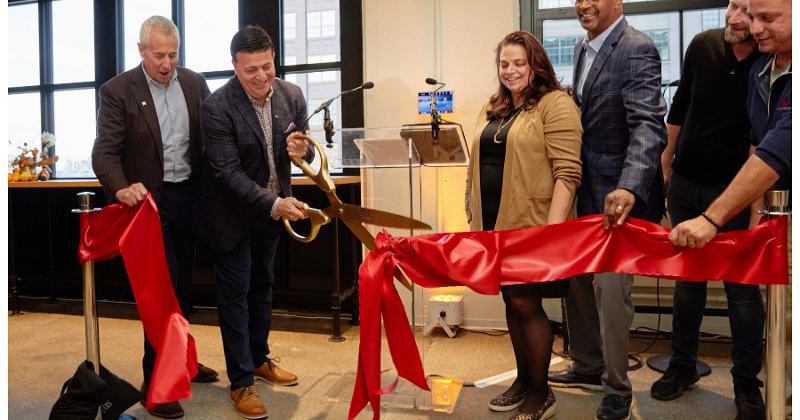 At the start of the pandemic, Danny Meyer’s restaurants were all closed, but a skeleton team of 12 was moving ahead with the buildout of a new headquarters for Union Square Events, the catering arm of the company.

“The Union Square Events team is on a roll and I’m so excited that we finally have a facility that is deserving of all the amazing work they do,” said Meyer, as he got ready to hold a giant pair of scissors for the ribbon cutting. “We’ve graduated to what feels like the best major league stadium, having worked our way up from the Triple A minor league ballpark of our early years.”

The massive space houses a 33,000-square-foot commissary kitchen, where chefs, pastry cooks and line cooks can prepare everything from an intimate dinner for 12 to a plated gala for 4,000. What seems like acres of stainless steel envelops the kitchen, which is equipped with a massive high-tech cold room, walk-ins, steam jacketed kettles, stoves, ovens, prep tables, dry storage, and a temperature-controlled butcher room and pastry area. 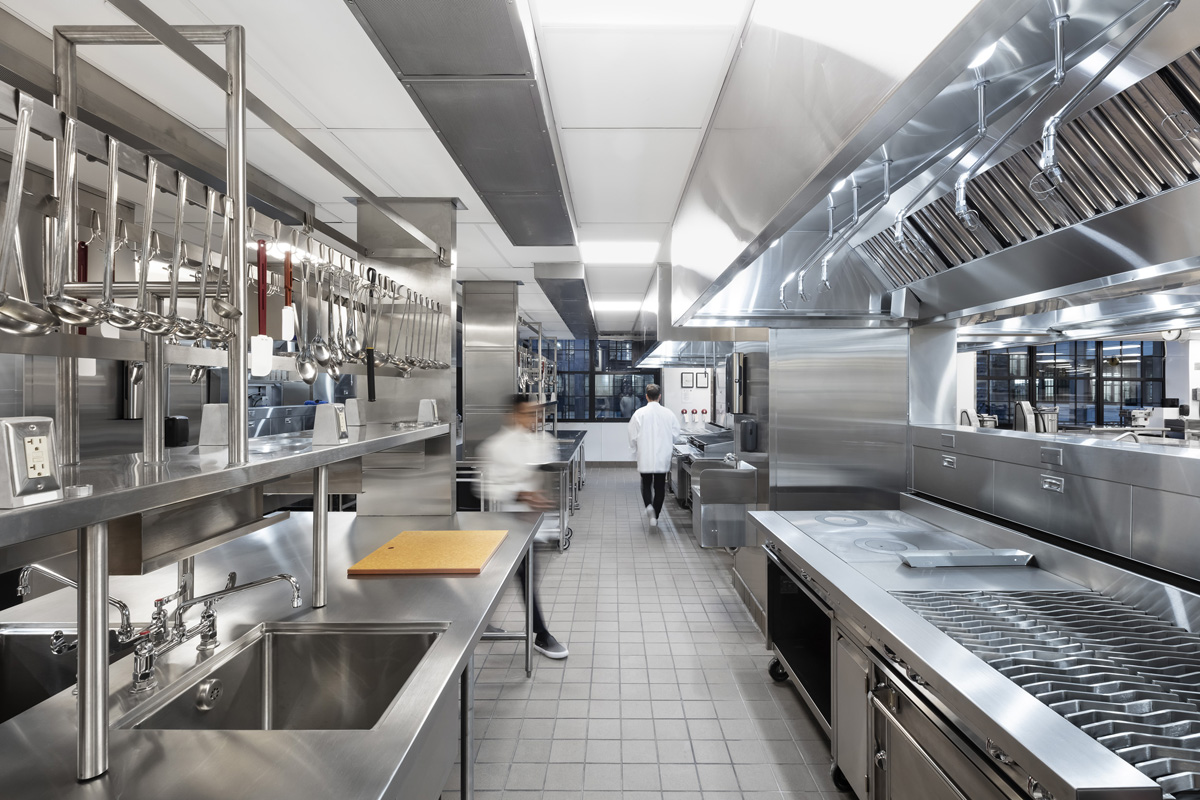 Space has been set aside in the commissary as an incubator for emerging food businesses to develop products and concepts.

It’s a long way from Union Square Hospitality’s start in the catering business, said Meyer. When he opened The Modern, an upscale restaurant in New York City’s Museum of Modern Art in 2005, he was asked to be the “preferred caterer” for the museum, he told the crowd. At first, the catering was done from the restaurant, but eventually “I had to create an events company,” he said.

USHG soon opened an events headquarters in Hudson Yards on Manhattan’s far west side—not the trendy area then that it is now. In the years that followed, Union Square Events became the foodservice provider for CitiField, home of the New York Mets, 15 arenas, the Saratoga Race Track, Delta Airlines, the Whitney Museum and a number of other public and private venues. Plus the company contracts to cater breakfast and lunch at Facebook and Hulu’s New York City offices and does countless weddings, private dinners, company functions and charity benefits.

“The largest event we do is the Robin Hood Foundation’s annual plated dinner for up to 4,000 people in the Javits Center convention hall,” COO Chip Wade told Restaurant Business. “That was just held last week and the gas was still not turned on in our new facility, so we had to cater it from a temporary location.”

The gas was just the latest delay in the project, said Wade. The opening was planned for June, but supply chain snags on construction materials and equipment caused several postponements.

USHG also was involved in getting several other projects off the ground over the last year, including two additional Daily Provisions locations and Apres Cafe and Bar, a destination restaurant atop New York City's newest skyscraper, One Vanderbilt. 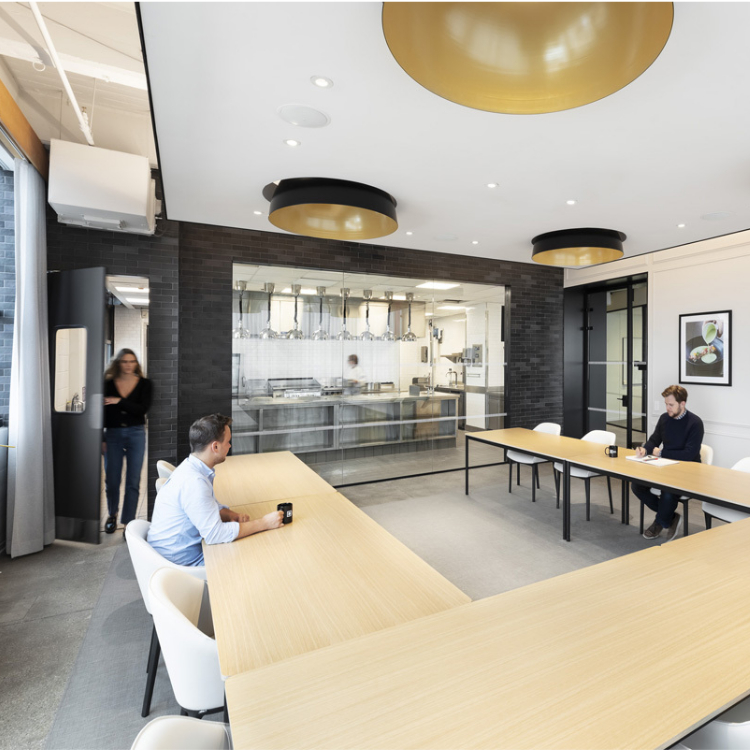 Now all the components are in place at Industry City. One of the highlights is the glass-enclosed R&D kitchen adjacent to a tasting room. Tony Mastellone, president of Union Square Events, explained that this will be used for the team to taste new menu items and for clients to sample food for their events while they view the chefs at work.

The team is also excited about the large, comfy room where employees can sit down in a bistro-style setting for family meal, a long-standing tradition with USHG. Although family meal is geared primarily to kitchen and serving staff, about 280 employees will be onsite in the new headquarters. 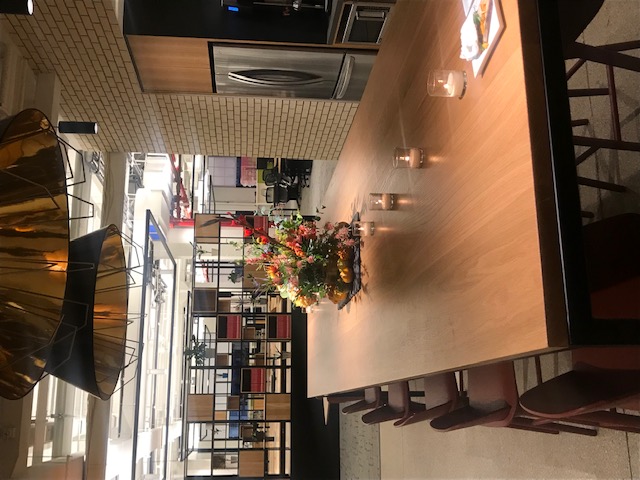 “At this stage in my career, I only want to do cool things with cool people,” Meyer told the crowd. “I believe in the vision of Industry City and we finally have a space we can be proud of.”

Industry City is a historic shipping, warehousing, and manufacturing complex on the waterfront in the Sunset Park neighborhood of Brooklyn. It has been repurposed into a business hub for entrepreneurs, artists and creative firms, and includes other culinary enterprises in the mix.