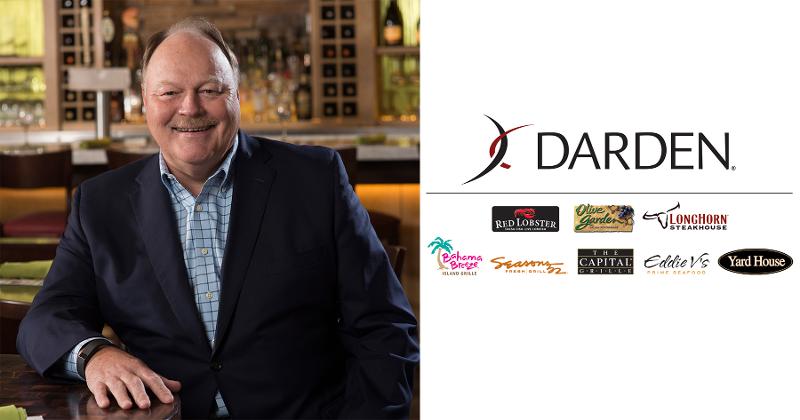 Dave George, the operations specialist who has been a key figure in the success of Olive Garden and other Darden Restaurants brands in recent years, will retire in August after 23 years with the corporation, the company announced today.

George is currently executive vice president and chief operating officer of Darden, the post to which he rose after holding the top posts in succession at Olive Garden, LongHorn Steakhouse and The Capital Grille, the company’s three foundational brands.

Darden CEO Gene Lee described him in a conference call with financial analysts as his partner in leading the company and said the two still have lunch together every Monday to recap the prior week’s development and plan for the week ahead. It’s been their ritual since George was recruited into the corporate operations of LongHorn Steakhouse and its then-parent, Rare Hospitality, in 1991 after serving as a joint-venture partner with the brand.

“The only thing that’s changed is that we now have salads instead of two or three entrees each,” Lee joked during the conference call. He noted that George will turn 65 years old later this year.

George and Lee were key figures in the rebound of Darden after an activist investor, Starboard Capital, forced a complete changeover in the company’s board in 2014 and pushed out the leadership team that had been in place. George was already president of Olive Garden,  and Lee was appointed interim CEO, with the foreknowledge that he might have to relinquish the post when a permanent chief was named.

Among the issues that troubled Starboard were operational tweaks that it believed were alienating longtime customers of Olive Garden, such as no longer salting the water used to cook pasta because it shortened the lifespans of the pots that were used. The spirited discussions focused on such nitty-gritty details as how many breadsticks were provided to customers when they sat down, and the quality of Olive Garden’s signature “bottomless” salad bowl.

George was given the charge of righting the operations, his longtime area of expertise.

Lee was subsequently named the permanent CEO of Darden, and George became his operational guru. Olive Garden rebounded to become one of the pacesetters in casual dining, and George was named corporate COO.

During the analyst call, Lee said he vividly remembered meeting George for the first time, when George was still running his own steakhouses in partnership with Rare. “We're going to visit his restaurants, so he picked me up at the airport in his Volvo with no air conditioning in the North Carolina heat,” Lee said. “I knew at the end of the day that Dave was a special operator. I wasted no time. We bought out his interest in this joint venture and brought them into the company.”

“Over the last 23 years, Dave has been successful in every one of his leadership positions,” Lee continued. “He built great teams and became a mentor to many operators and executives. His can-do approach and attitude permeate Darden and each of our brands today.”

George’s successor as COO was not named.