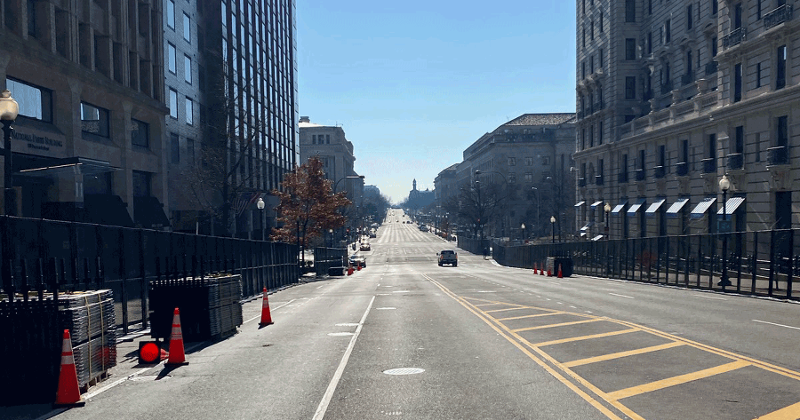 Every four years, the foundational industry of Washington, D.C.—government—delivers a sales bonanza to restaurants and other local enterprises. “For any businesses around the capital, you’re talking about doing 200, 300% of normal business because of the inauguration,” says Gavin Coleman, the native Washingtonian who runs The Dubliner, a landmark Irish pub. “People come from all over, and that inauguration business stays around for three or four days.”

Indeed, The Dubliner has served for the last three swearing-ins of a U.S. president as the remote broadcasting site for MSNBC’s popular “Morning Joe” news program, packing the restaurant before sunrise and anointing the place as a must-see stop for visiting tourists.

But this time around, with the city bracing for an echo of the Jan. 6 insurrection that saw rioters storming the Capitol, The Dubliner will be closed. Ditto for Coleman’s seafood restaurant, The Salt Line, even though it’s located in a residential area away from Capitol Hill.

“We have a big outdoor dining area, and the people there won’t have other options because they can’t get anywhere else, and we’re right there,” says Coleman. “I’m sure we could do a little bit of business. It’s more about staff and their safety. We’re going to close.”

The problem isn’t just the chance of violence erupting around the U.S. Capitol or other government landmarks in the area. For the sake of public safety, the city has shut down portions of its public transit system, limiting the ways employees can get to work—or undeterred tourists can move around.

Coleman provides Uber car service to employees at his expense, but even that option is unfeasible as the city braces for the possibility of more violence and mob disruption. Many of the District’s busiest thoroughfares, including parts of Constitution and Independence Avenues and K Street, were closed last Wednesday morning.

Washington Mayor Muriel Bowser has directed restaurants to keep their dining rooms closed through the inauguration and for all consumers to stay home. Local residents and hotel guests still have the options of takeout and delivery, but delivery couriers or foodservice distributors are also hamstrung by the security measures restricting transportation.

“We have pizza shops on roads that have been totally cordoned off,” Andy Hooper, president of the 48-unit D.C.-based &pizza chain, said in an interview with Restaurant Business last Thursday. “We’re working with [the distributor] US Foods to arrange drops on the streets outside of those areas, so our employees can retrieve the deliveries.”

The Restaurant Association of Metropolitan Washington (RAMW) has alerted local operators and their distributors that screening centers will be set up to verify the safety of deliveries before they’re handed over to establishments.

“This week has been fairly status quo for us—up until this point,” Hooper said Thursday. “As we head into the weekend, certainly business in the city, we’ll probably see less of that.” Already, he says, “it feels like a ghost town in downtown Washington.”

&pizza has not yet decided whether next week it will shut the dozen or so pizzerias it operates downtown. “Right now, it’s status quo, so to speak,” Hooper says. “I expect that it will become less so as we move closer to Wednesday.”

The city has decreed that all downtown businesses should close before dinnertime on Tuesday, Jan. 19.

“We have pizza shops on roads that have been totally cordoned off. We’re working with [the distributor] US Foods to arrange drops on the streets outside of those areas, so our employees can retrieve the deliveries.” -Andy Hooper, &pizza.

Customers will be scarce during the early part of the week, Hooper expects, but the real issue is the safety of employees and their ability to even get to the restaurants. “After the events of last Wednesday, I sent out a message to the system letting them know we’ve been in touch with the mayor’s office,” he explained. “We would never do anything to put their safety in danger.

“As a benefit for our employees, we have an arrangement where they can use Lyft,” he continued. “But that doesn’t do us much good right now.”

Parking has been suspended in many areas, and parking garages in monitored zones were closed on Friday morning to avert the danger of IEDs—improvised explosive devices—being planted, with the shutdowns slated to continue through the inauguration.

RAMW is advising members to provide employees with a letter attesting that they’re essential workers heading to or from work, as allowed under the District’s emergency decrees. It’s also encouraging operators to contact their local Secret Service Zone Agent, the enforcement official in charge of each shut-down area, if they have any operational questions or issues.

The association declined a request for an interview about local conditions, saying in an email that preparation for the inauguration leaves no time for media relations. “At this time, we are at max capacity supporting the restaurants as they figure out if they'll need to close, or figure out how to get their employees to work,” wrote  Events and Education Coordinator Linda Hunter.

RAMW had scheduled its Winter Restaurant Week to begin on Monday. But after Mayor Bowser announced that she was extending a suspension of indoor restaurant dining until Jan. 22, the group postponed what local operators describe as traditionally a significant boon to local business. The 14-day Restaurant Week is now slated to start Jan. 25.

Because restaurants would have been limited to 25% of their indoor seating if the suspension of dining-room service had been lifted as planned on Jan. 15, the focus of this year’s Restaurant Week has been on delivered and takeout meals.

Uncertainty abounds about what next week will bring to D.C. restaurants and their communities. The hope voiced by local authorities, residents and members of government is that the city won’t suffer a repeat of the violence and attempted insurrection that resulted in the deaths of five people on Capitol Hill and a desecration of a democratic landmark on Jan. 6.

“I have to imagine that there’s going to be some degree of activity, but I don’t anticipate anything close to what we saw last week,” said Hooper.

In his view, last week’s mob consisted of hardcore insurrectionists who may have been organized to some degree, plus more haphazard rioters who were swept up in the violence.

“Next week is just for the serious insurrectionists,” he speculates. “The come-along-for-the-ride folks are not going to come anywhere close.” Hooper notes that 20,000 National Guardsmen will be bivouacked in and around the Capitol to prevent a repeat of Jan. 6.

Both Coleman and Hooper are long-time Washingtonians, and both say with vehemence that they’ve never seen anything like what they witnessed in their city on Wednesday, Jan. 6.

“On Wednesay, we closed all of our pizza shops at 4 o’clock. We made that decision at 3:20,” says Hooper.  “Our teams did a great job of getting everyone out safely and quickly.”

Coleman decided to shut Salt Line at 3 p.m. that day, after seeing how many people in Proud Boys T-shirts were coming in.

“We had seen what was going on, and how the warnings were coming in from the District. It was not the safest situation for our staff. It just wasn’t worth us being open, being so close to what was happening.”  -Gavin Coleman, The Dubliner.

On Monday and Tuesday of that week, in anticipation of possible trouble, The Salt Line had posted signs saying it reserved the right to deny service to any customer.

“It’s a fine line, who you can deny service to,” says Coleman. “We got lots of legal counsel.”

But the progression of events signaled that stronger measures would be needed.

“We had seen what was going on, and how the warnings were coming in from the District,” says Coleman. “It was not the safest situation for our staff. It just wasn’t worth us being open, being so close to what was happening.”

He cites reports that Washington may convene a celebration in the summer of Joe Biden’s inauguration as the nation’s 46th president, a possibility that local and federal officials have also raised. But a date and definite go-ahead have yet to be announced.

By then, the danger of coronavirus may have also waned; Hooper says he’s already received notice from the mayor’s office that the vaccination of restaurant employees against COVID-19 is ready to begin Feb. 1.