First Watch, the Florida-based breakfast-and-lunch chain, is an oddity among public restaurant companies.

Its stores are open just over seven hours a day—from 7 a.m. to 2:30 p.m.—and don’t serve dinner. And yet what the restaurants can do in those 7.5 hours is close to what some of its competitors manage over a full 24. Average unit volumes at the 423-unit chain are $1.6 million, just slightly lower than Denny’s.

Much of First Watch’s success has hinged on this model, which the chain calls “daytime dining.” Never having to work at night is a big selling point for staff, demonstrated by a turnover rate that is 20% lower than the industry average. And its restaurants are consistently busy, allowing the chain to focus on meeting unfulfilled demand rather than generating it.

And, said CEO and President Chris Tomasso, First Watch is not so different from its many full-service counterparts that serve only lunch and dinner.

“We just happen to be open for two different dayparts,” he said.

The chain’s leaders spent the past few weeks preaching the virtues of its model to investors, and those efforts appear to have been successful: The chain raised $170 million in its IPO Friday, and shares had risen more than 25%, to nearly $23, as of midday.

“We believe that our differentiation and our specialization and really the creation of this daytime dining category is real, and we have had a great opportunity to really explain why daytime dining creates such a compelling business model and why we’re so excited about our future and our growth,” Tomasso said in an interview with Restaurant Business. 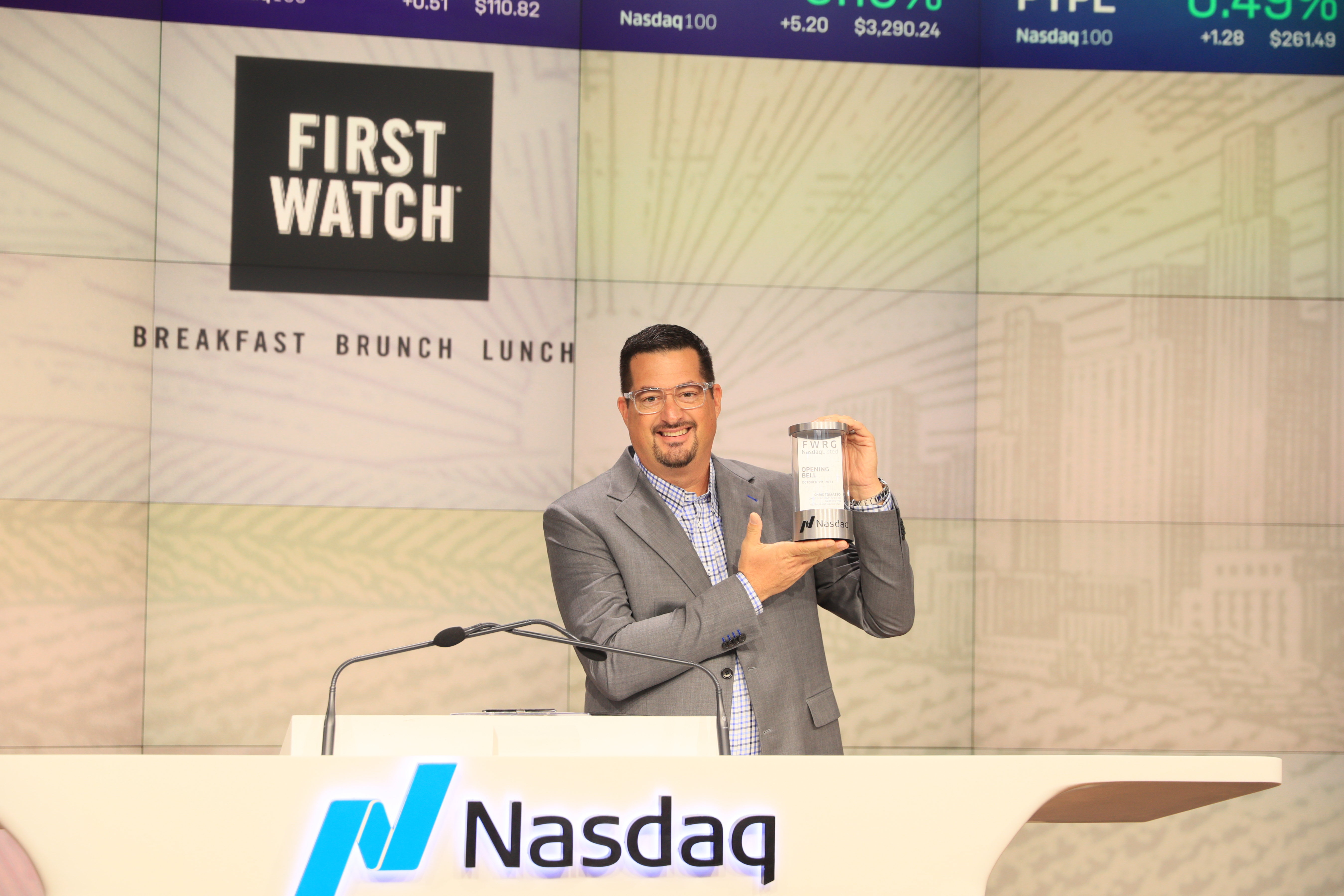 Within those limitations, though, the brand has changed significantly over the past year. Shortly after the pandemic began, it launched online ordering via web and mobile and began working with third-party delivery providers. Off-premise, once an insignificant portion of the business, is now generating more than $8,100 in weekly sales per restaurant.

“It’s a benefit for us to have had basically no off-premise business to speak of before, because now for us it’s highly incremental,” Tomasso said, adding that those off-premise guests tend to be new customers.

The chain is also in the process of adding alcohol in all of its restaurants, a change that Tomasso believes could have a big impact, especially at brunch. In the roughly two-thirds of its stores that currently serve booze, more than 7% of customers order it, Tomasso said.

Weekend brunch makes up the largest portion of the chain’s business—about 45%. Weekday breakfast accounts for 35%, while weekday lunch sits at 25%—and First Watch views that as an opportunity.

“There are many times of day and certain days where we have the high-class problem of more demand than we can serve,” he said. “Where we believe we have capacity still is during weekday lunch.”

The chain plans to add to the lunch menu as well as invest in marketing to push it into diners’ midday consideration set, a daypart Tomasso acknowledged is much more competitive than breakfast.

And as for the unfulfilled demand—those guests who can’t get a table—First Watch is working to address that, too. New prototypes are designed with throughput in mind, featuring patios, indoor/outdoor bars, a second makeline for to-go orders, double dishwashers and bigger griddles, Tomasso said. They’re expected to generate $2.5 million in average unit volumes.

“All of those things play into our ability to unlock more top-line sales,” Tomasso said.