Months before the coronavirus turned restaurants into a to-go business, the high-volume Velvet Taco chain fixed its focus on a not-so-bad problem to have. The fast-casual concept couldn’t push its made-to-order specialties through the system fast enough during peak times to avoid the waits that can drive impatient patrons elsewhere. Units were generating the annual equivalent of $4.2 million in sales, but customers were typically investing 11 minutes in getting their tacos and margaritas, to go or to eat on site.

With coronavirus providing a tailwind, the 18-unit brand plunged into a salsa-to-nachos overhaul of operations. The menu and recipes were untouched, but the typical order process was broken into 15-minute intervals to reveal where seconds could be shaved, and a hand-motion study was undertaken for the same end.

The wholesale operational changeover has boosted throughput by 20%, raised sales by 15%, and cut average ticket times to 6.5 minutes at the units where it has been implemented. Four units have been given the re-do—one built from ground up, one converted from a defunct restaurant, and one rehabbed from an old gas station. The refurbished unit in Plano, Texas, took in $103,000 during Opening Week.

The plan is to embrace key aspects going forward. Half of new restaurants, for instance, will be outfitted with a drive-thru pickup lane, where customers can retrieve digitally placed orders in transactions currently averaging 24 seconds, says Velvet Taco CEO Clay Dover.

Early in the research that went into the operational overhaul, Velvet Taco realized that it needed a dedicated system for producing and distributing off-premise orders, Dover says. Velvet Taco’s make line was reconfigured as a double line, with one side producing orders for on-site consumption and the other handling delivery and takeout orders.

Pre-pandemic, 37% of a typical unit’s sales were generated from off-premise orders. That mix has soared to 68% with the pandemic, Dover says, adding that he expects the portion to drop somewhere in the middle—more or less around 50%--in a post-COVID-19 world. To make that a reality, all Velvet Tacos now feature a walk-up to-go retrieval window.

He adds that 70% of Velvet Taco’s digital orders are being placed via the group’s app and website, enabling it to capture detailed information on customers instead of losing that data to third-party delivery partners.

Technology was a key part of the re-do, the longtime industry veteran says. For instance, Velvet Taco’s paper-based ticket system was replaced with a KDS, so orders from the chain’s new POS system are relayed back to the kitchen instantly.

In addition, the new format and its focus on off-premise have reduced the amount of real estate that’s needed. Buildings sporting the new operational package measure around 2,600 square feet, and less parking space is needed because more customers are eating their Velvet Taco meals at home or in their cars. 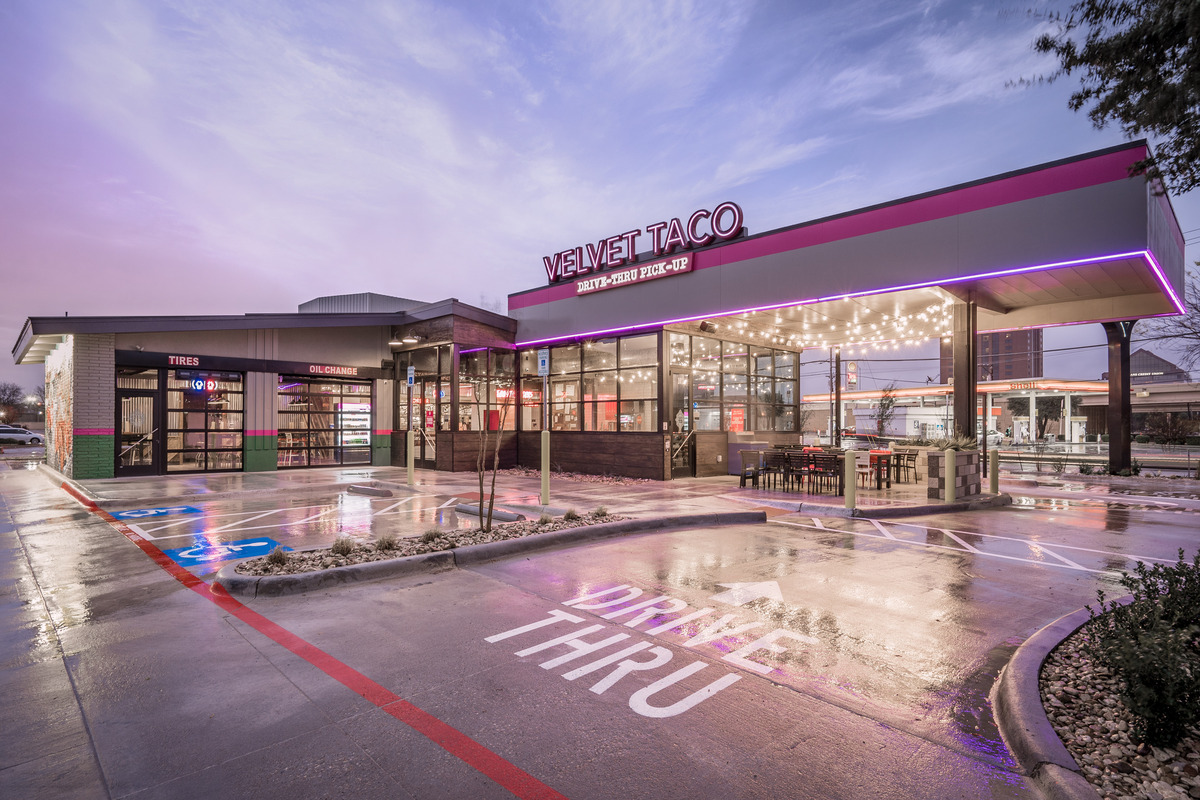 The new procedures and design features have also reduced the labor needs per store, according to Dover.

The changes were the result of an intensive effort that began before the pandemic, starting with the recruitment of an executive team with deep operational experience. Dover, who moved up to CEO from president in Aug. 2019, has a background in that discipline as well as marketing.  Ken Brendemihl, Velvet Taco’s SVP of operations, spent time in the operations departments of California Pizza Kitchen and Brinker International, and was a market partner for Texas Roadhouse.

Looking for a pre-COVID boost in takeout, the team started by changing its packaging. The switch to a new POS system opened the way to a new app and more digital ordering, while the switch to double-sided make lines provided more efficiency in handling delivery and takeout orders.

Next, “we decided to drill down on our ticket times,” said Dover. “We started looking at our ticket times in 15-minute intervals to see where we were getting bogged down. We also did a study of hand motion.”

The final phase, he says, was integrating all the various moves, a step that included meeting with third-party delivery services.

By then, the pandemic was in full swing. “We were already pointed in the right direction, but it did allow us to make decisions quicker.,” says Dover.

He expects to continue tweaking his charge as experience reveals more potential efficiencies. “We’ll make adjustments as we go along—the restaurant industry is always changing,” he says. “That’s one of the benefits of being small.”

The process has already yielded some learnings. one thing that we’re learning is, we’re not a drive-thru concept.

“The first week of opening the prototype, 25% of guests tried to order at the drive-thru pickup window,” says Dover. That percentage dropped to 10% in Week Two as customers caught on that they could only retrieve a meal from the drive-thru, and is now hovering around 5%. “We’re actually directing them to a parking spot where they can order digitally and then pick it up.”

The next phase is developing more units, both conversions and new construction, that sport the new processes and features.  “We’ve spent the last two years in taking a concept that is much beloved and putting in place all of the systems to scale it,” says Dover. “I’ve got eight deals already in the pipeline. These changes will have long-terms impact on the brand.”