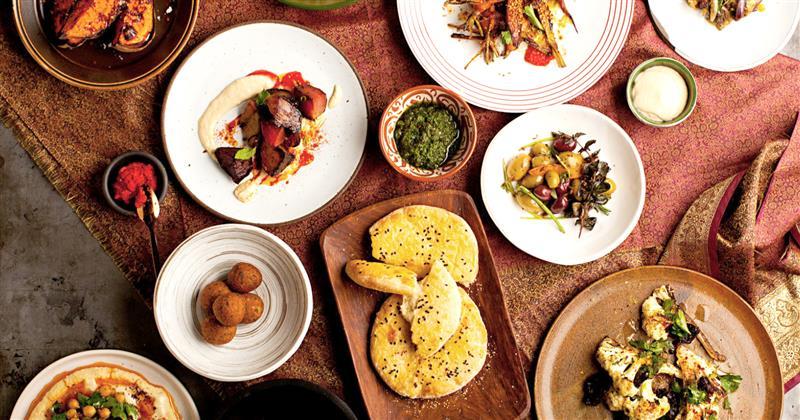 Franklin Becker believes in the power of ghosts. The celebrated chef, who ran some of New York City’s top restaurant kitchens and founded fast-casual Little Beet, is taking his talents into the virtual space. ”I’m using the ghost kitchens to test the market potential of several new concepts and learn all I can about the virtual world,” he said.

Ghost kitchens have grown exponentially during the pandemic, turning from niche players into industry forces. Aggregators such as Kitchen United started the trend a couple of years ago, but in 2020, major chains have launched their own delivery- or takeout-only restaurants. Applebee’s, Chili’s, Outback, Red Robin, Fazoli’s, and Dickey’s are just a few that have created virtual brands around specific items. Wings seem to be the most popular, but then there’s MrBeast Burger—a concept linked to a popular YouTube star that grew to 300 virtual locations practically overnight.

Many of the chain concepts operate out of kitchens in existing units. Some independent restaurants are taking the same route, cooking up burgers or pizza under a different brand in their same restaurant space. But Becker has launched four ghost kitchens out of a new building, betting that to-go customers are looking for more choice and more culinary inspiration. 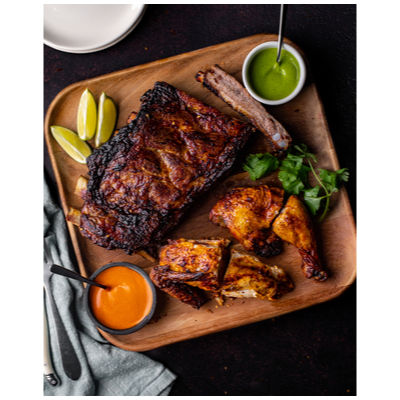 “I spent a pretty penny building out the kitchen,” Becker said, tricking it out with specialized gear such as a wood-burning oven and equipment for making tortillas from scratch.

Originally, Becker planned to open a couple of these brands as brick-and-mortar anchors in New York City and operate the ghost kitchens from there, but the pandemic temporarily derailed those plans. Once he sees how the concepts fly, he would like to expand them into brick-and-mortar locations, he said.

Becker partnered with Zuul, a New York ghost kitchen provider that licenses its technology to operators who are running multiple concepts out of a single location.

Keeping the menus concise is the key to success, Becker believes. Although his menus run between seven and 10 items each, ingredients can be utilized across the four brands to keep inventory to a minimum.

At Galinha, for example, Becker menus Portuguese grilled chicken, ribs and linguica sausage cooked over wood, sided by roasted potatoes and piri piri sauce. Shai’s menu offers variations on hummus, spit-roasted chicken shawarma and falafel. At Universal Taco, the chicken shawarma is rolled up in a tortilla and can be topped with one of the Middle Eastern sauces, such as green schug or mango amba.

“Tacos are the perfect vehicle to take people around the world, especially in a time when we can’t travel,” said Becker. Other choices at this Mexico City-inspired taqueria include Peking duck and Indian-spiced cauliflower. 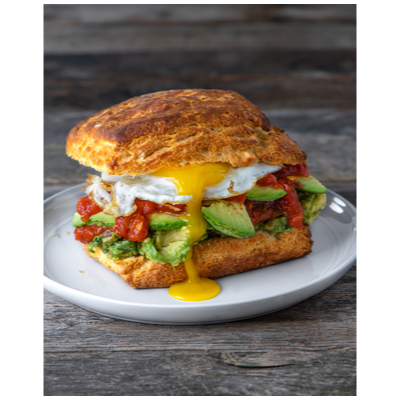 Although the ghost kitchens just opened on March 1, Becker reports that he is getting good traction on third-party delivery sites, including Uber Eats, Grubhub, DoorDash and Seamless, thanks to Zuul’s infrastructure and integration. “It would be too expensive to do on our own.”

Andy Marshall, CEO of multiconcept restaurant group A. Marshall Hospitality based in Franklin, Tenn., decided to give it a try on his own. “When the pandemic hit, we weren’t really structured for takeout and delivery,” he said of his full-service restaurants. “We quickly had to figure what transfers well to a box.”

The conversation eventually evolved into “What else can we do?” and that conversation became a reality with the launch of Burger Dandy, the group’s first ghost kitchen. The first retro burger, fries and shakes concept operates out of Marshall’s Americana Taphouse restaurant in Franklin.

Marshall and his team realized they could use the same staff and infrastructure to run this virtual kitchen and it would provide an additional revenue stream until restaurants got back up to full capacity and sales. “We came up with a menu, logo and packaging and it was ready to go,” he said. There are now three Burger Dandys operating from various A. Marshall Hospitality restaurants. 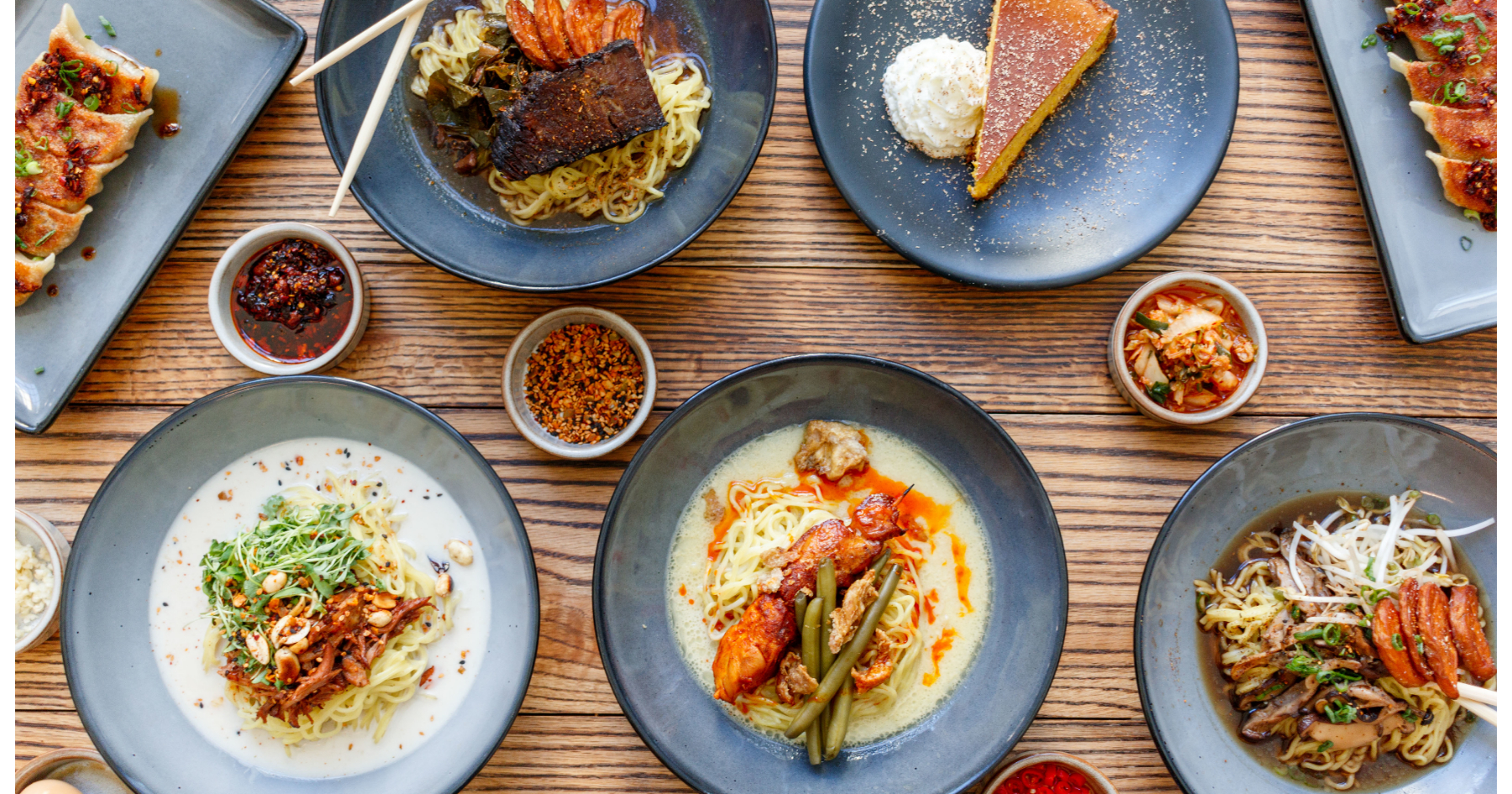 To match the virtual concept to the customer, Marshall looks at the demographics in the neighborhoods where his restaurants are located. Burger Dandy is geared to families, so the three are in family neighborhoods, but his second concept—NASHi Noodles—is in downtown Nashville, a young professional area with more adventurous eaters.

NASHi Noodles, a ramen concept, opened on March 3 and operates out of Deacon’s New South restaurant. The “Southern comfort ramen” bowls are available for pickup and delivery only and do not appear on Deacon’s high-end steakhouse menu for dine-in customers.

Deacon’s executive chef, Chris Calder, felt the Nashville market was underserved when it came to high-quality ramen. His pared-down menu features Japanese ramen with a base of housemade broth and a choice of smoked pork shank or short rib as well as the local favorite, Nashville hot chicken. Handmade gyoza are also available.

Marshall has a third virtual brand in the works, aimed at health-conscious diners. Fresh 96 is launching soon in a neighborhood that’s home to people with healthy lifestyles, he said.

“Each virtual concept took about three months to create, but we’re now launching them every two to three weeks,” said Marshall.  Just a few pieces of equipment needed to be added to the restaurants’ existing kitchens—a milkshake machine for Burger Dandy and some ramen-making gear for NASHi. But basically, the team utilizes stations that aren’t that busy.

It was a bit of a learning curve for Marshall and his teams, who previously “were so busy taking care of people sitting at tables,” he said. Fulfilling digital orders is a whole different ballgame.

At first, Burger Dandy relied on current staff to handle orders and manage the third-party delivery drivers, “but a month in, we needed to hire more people,” said Marshall. “I’m pretty amazed at its success.”

A means of survival

When COVID closed down his Rockford, Ill., restaurant, Scott Frank decided to remodel the place and change the name from the previous owner’s Ciao Bella Italian Kitchen. The full-service restaurant opened for dine-in as Pomodoro, but not until a year later. In the meantime, Frank was desperately trying to find a way to make money. His US Foods sales rep planted the idea for a ghost kitchen last August, and Baked Wings launched in September.

“It was the first time I had heard about ghost kitchens, but I immediately embraced the idea,” said Frank. “We talked through several possibilities, including pizza and burgers, but with football season starting, I wanted to do chicken wings.” 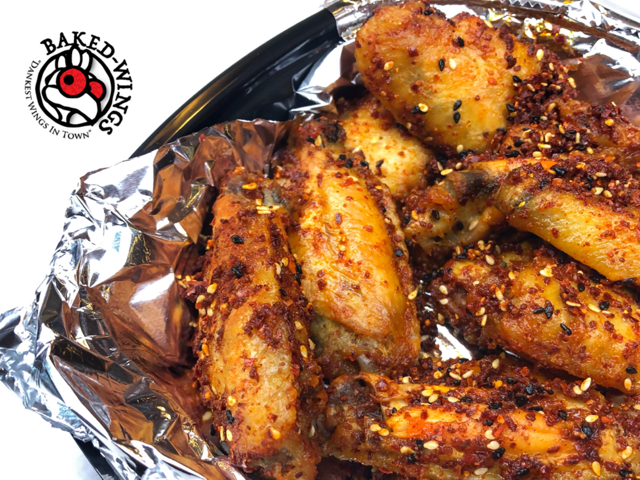 To differentiate the concept from chains’ virtual wing brands, Frank decide to go for a healthier wing, baking them instead of frying and creating 12 flavorful rubs instead of drenching them in sauce. “These stay crisp in transit while sauced wings get all soggy,” he said.

In an effort to help its indie restaurant customers in 2020, US Foods created a ghost kitchen playbook. “We offer ideas for off-the-shelf concepts and the tools to execute them,” said David Eschler, VP of culinary and restaurant operations for the distributor. US Foods provided the technology to set up a website and ordering system and leveraged its partnership with ChowNow for third-party delivery.

“Orders come through the Baked Wings website, so I get 100% of the profits,” said Frank. “Chicken wing prices are through the roof, so I couldn’t afford to give DoorDash 32% of my revenue.”

Baked Wings also menus housemade, hand-battered chicken tenders and sides such as sweet potato tots and loaded fries with bacon, cheddar and scallions. “I added zero new equipment to execute this concept at a very high level,” said Frank. “From September to March, 70% of my revenue came from Baked Wings.”

For its part, US Foods doesn’t sign a contract or take a cut. “We wanted to help indie restaurants shift their business online during the pandemic and ultimately just want them to continue to buy products from us,” said Eschler.

Scott really leaned into social media to drive interest from the Rockford community. “You really have to stand out on DoorDash, and he generated a lot of conversation around his brand and logo,” Eschler said. “That local passion differentiates Baked Wings from Applebee’s and Chili’s virtual wing concepts.”

From virtual to real

Scott sees Baked Wings evolving into a brick-and-mortar restaurant, starting with one in northern Illinois. “My five-year plan is to expand it into Las Vegas and possibly Arizona and Florida,” he said.

Marshall feels “there’s a possibility” that Burger Dandy can become a free-standing restaurant with multiple locations. The ghost kitchens are a test for the idea.

And Becker currently has a five-concept food hall under construction at New York’s Columbia University, which will include locations of Shai and Butterfunk Biscuits. “I’m actively seeking expansion,” he said.