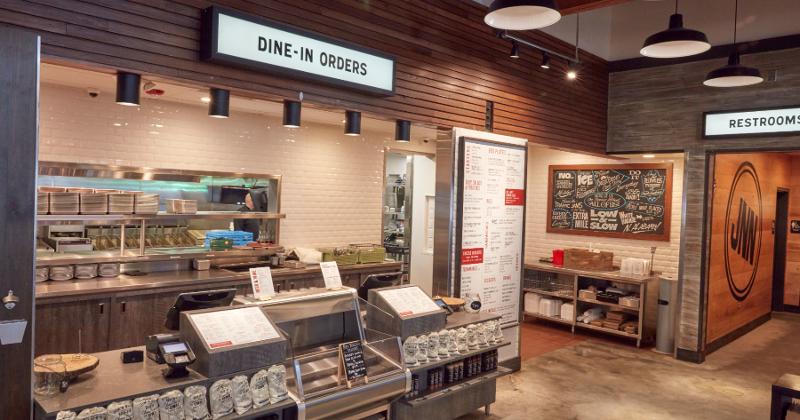 For the past year and a half, the 38-unit, Alabama-based chain has been shifting from servers to counter service in some of its restaurants as it tests what it calls “fast casual plus,” a model intended to speed up operations while still offering the hands-on hospitality the brand is known for.

“Just to be faster, to be more flexible and more convenient was a big driver of it,” said CEO Larry Ryback.

So far, four existing Jim ‘N Nick’s have been converted to fast casual plus, which involved installing counters and menu boards as well as some other light refreshes. A fifth counter-service location was a new build.

In the revamped restaurants, customers order at the counter, get their own beverage and seat themselves. A runner brings them their food and checks back in throughout their meal. Managers are also trained to visit every table, Ryback said. 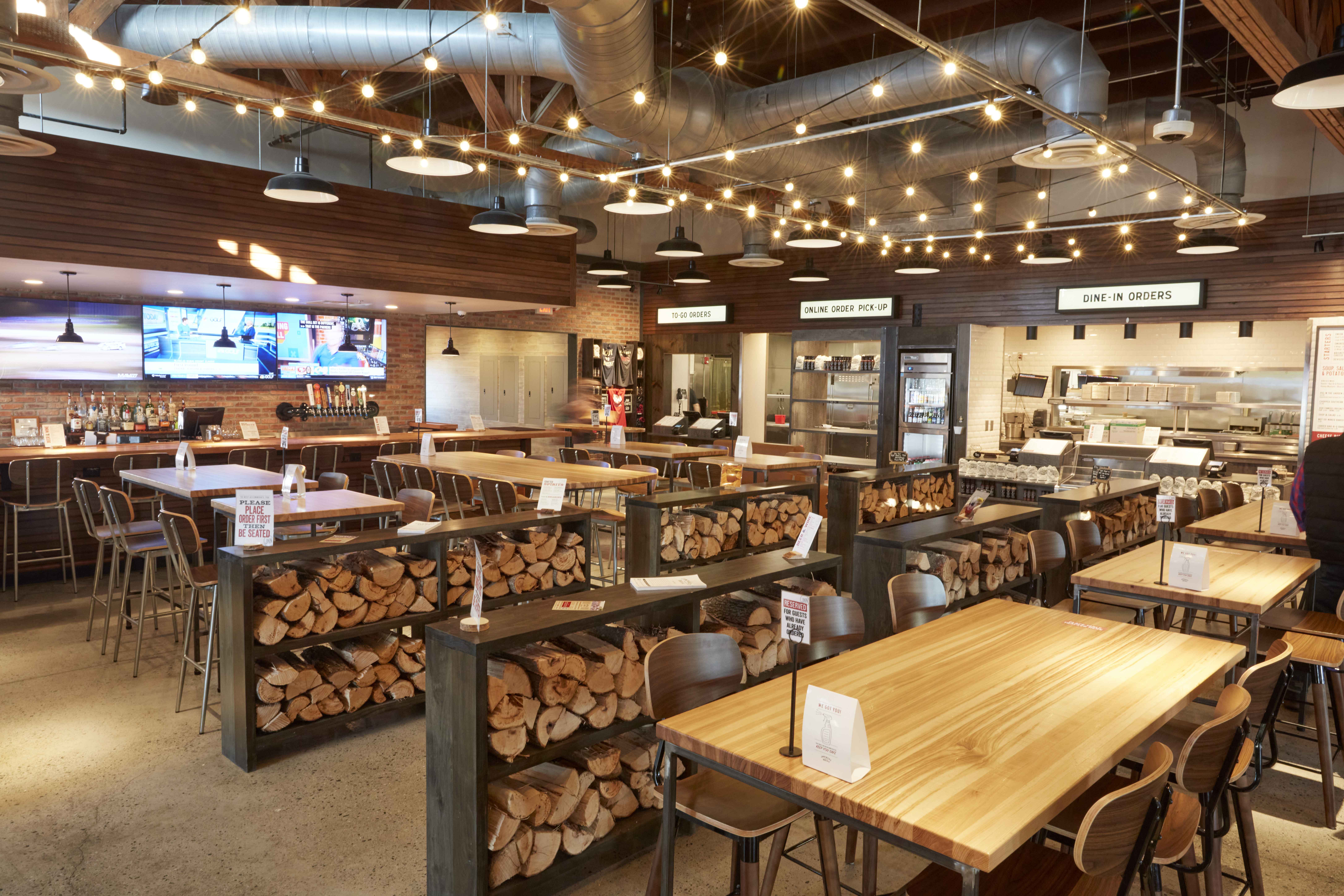 Jim 'N Nick's fast-casual remodels have the same number of seats as before. / Photograph courtesy of Jim 'N Nick's

The new format brings Jim ‘N Nick’s more in line with other concepts in the barbecue category, which lends itself well to speed because the meat is cooked in advance. But even Ryback was shocked by how much the setup has accelerated service. At the fast-casual locations, it takes customers about two minutes to place their order and five minutes for the kitchen to prepare it. By the time the guest fills their drink and sits down, he said, their meal is almost ready. When they’re done, they can leave without having to wait for a check.

Ryback said it’s too soon to say whether the faster turnarounds have led to more sales. But he noted that average transaction sizes are higher because customers are more likely to add dessert. “We believe that that’s because we’ve got desserts on display for grab-and-go,” he said.

Curiously, nonalcoholic beverage sales have also increased, which Ryback theorized is because more sales are being captured as people have to pay before they get their cup. There's no chance of a waitstaffer forgetting to put the charge on the check.

The format could also prove to be more cost-effective. The renovated locations have the same number of seats as before, but can operate with slightly fewer staff because the server position has been eliminated. 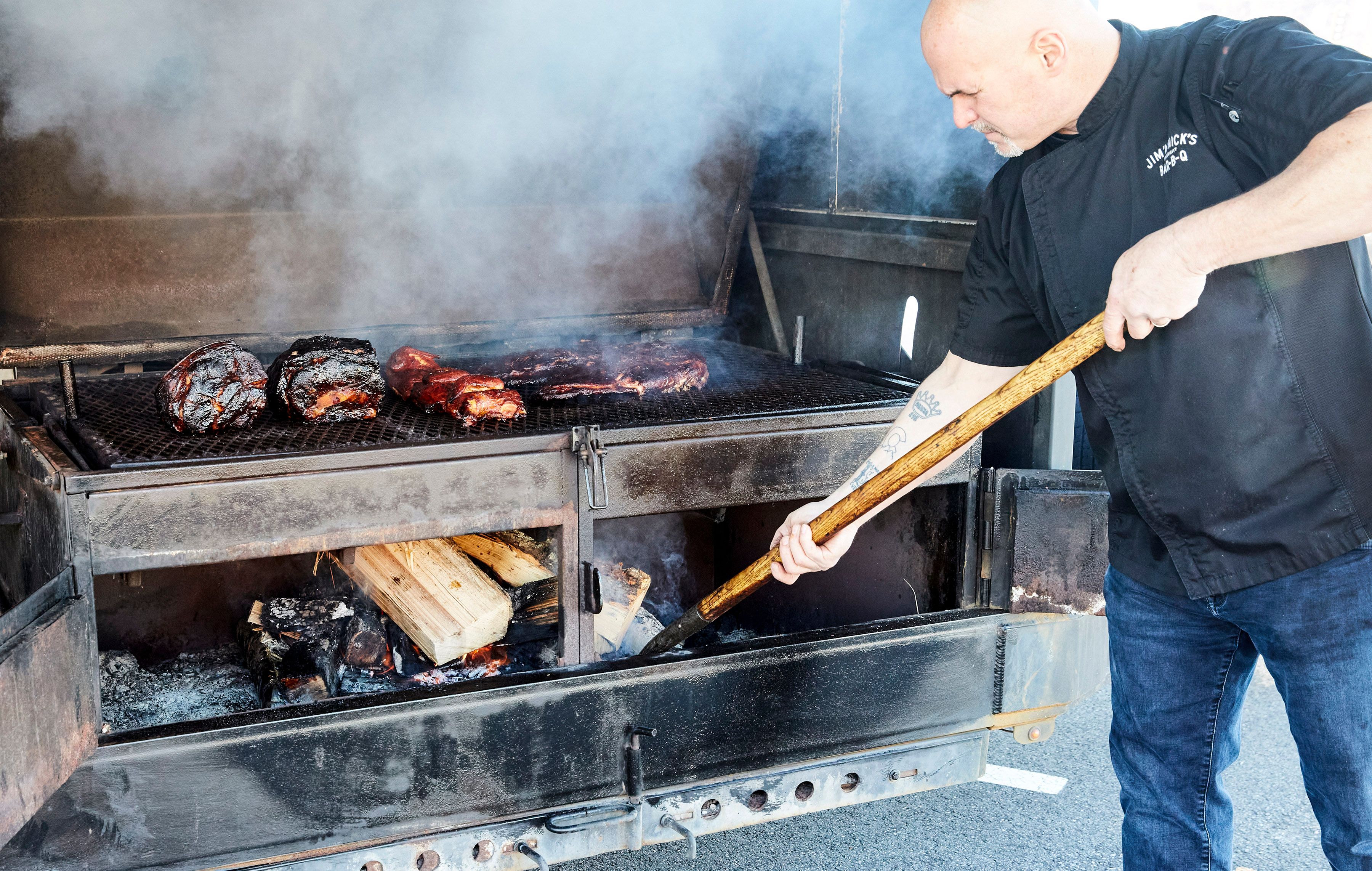 Barbecue lends itself well to speedy service because the meat is cooked in advance. / Photograph courtesy of Jim 'N Nick's

The pandemic has led to some soul-searching at full-service restaurant chains. Many, like Jim ‘N Nick’s, have begun testing the limited-service waters with scaled-down prototypes or spinoffs in an attempt to take advantage of the growing demand for off-premise.

But Jim ‘N Nick’s is not the average casual-dining chain. It has long done a brisk takeout business thanks to drive-thrus at every location. During the pandemic, it also added online ordering, third-party delivery and curbside pickup. Its sales are now evenly split between dine-in, drive-thru and takeout. And as for what the future might hold for sit-down restaurants more generally, “I don’t know the answer to that yet,” Ryback said.

“We’re not rushing into this, because there’s a lot we still want to learn about how it changes how guests view us,” he said. “Do the occasions that people use you for change as the result of the format?”

Jim ‘N Nick’s was expecting some pushback from customers when it moved away from its familiar model, Ryback said. Some people have balked at having to wait in line rather than being seated. But for the most part, the reaction has not been as strong as anticipated. “As long as we have a conversation with guests, they typically leave happy,” Ryback said. “What we’ve learned is it’s such a faster experience, and there’s so much flexibility.”

The chain has not yet decided whether it will convert all of its restaurants to fast casuals, the CEO said, though he acknowledged that it’s a possibility.

“This is something that we’re kind of in a test-and-learn mode,” he said. “I don’t want to send a message that we are converting every restaurant in the system tomorrow.”