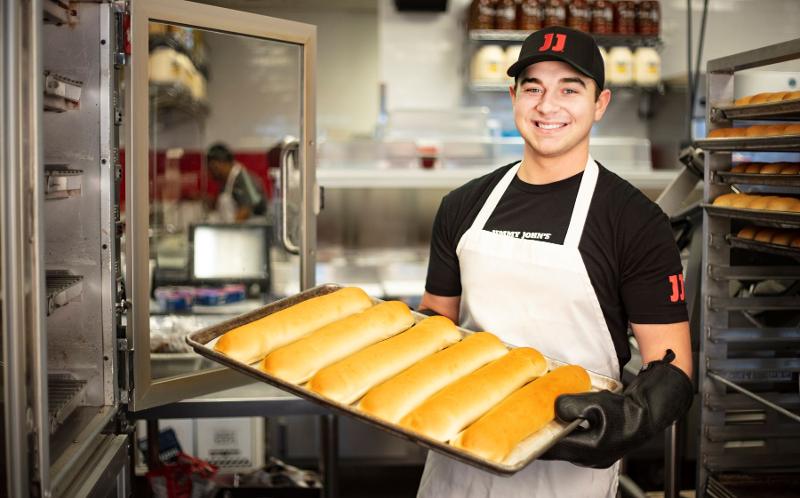 In February, Jimmy John’s introduced something it hadn’t had before: A sandwich that wasn’t on its base menu.

But the bigger deal was that it was different. For years Jimmy John’s had a single menu that rarely changed and didn’t feature limited-time offers.

“We didn’t have LTOs before this year,” Chief Operating Officer Sarah Mueth said in an interview. “We’re going to have two more this year. It’s something we’re planning to do, about two to three a year. So more LTOs are coming.”

The LTO was among a number of changes the brand has made this year, one that it calls “transformative.” The chain adjusted its menu, in part to make room for LTOs, and changed its logo. It also introduced the first Super Bowl ad in its history.

The changes have helped supercharge sales this year as consumers returned to restaurants. And now the company and its franchisees plan to hire some 10,000 workers this week—about 4 per store—as the chain hopes for a big summer.

“We’re really excited about where we are coming out of COVID,” Mueth said. “We want to get extra support to the stores.”

The spike in restaurant demand has caused labor challenges throughout the industry, and several chains like Taco Bell and McDonald’s have been having hiring events—often hiring people on the spot. Sign-on bonuses and even interview bonuses have become common and pay has increased as a rule.

At Jimmy John’s, drivers in Montana make $19 an hour before tips. An operator in Louisiana just gave workers a 10% pay bump—the second year in a row the operator did so. The chain and its franchisees have upped benefits and provided retention bonuses and paid time off.

Jimmy John’s hiring event runs from Tuesday through Thursday at all 2,600 locations. Workers will be hired on the spot for various positions. “Everybody is putting in the energy and thoughtfulness in pay and what they can do to get [workers] and keep them,” Mueth said.

But the company also believes the hiring will get the chain ready for summer. Jimmy John’s struggled during the pandemic, like many chains, with sales falling 8.5% despite its delivery business—most of the chain’s sales are still walk-in, which was a problem during the pandemic.

The chain’s changes this year were the biggest at the company since its 2019 sale to Inspire Brands, the owner of Arby’s, Sonic and now Dunkin’.

Mueth said the changes the chain made after introducing its Super Bowl ad, including the LTO and the menu changes it made in March, have helped it generate strong sales this year as consumers returned to restaurants. “We’ve had numerous weeks with our best results in the brand’s history,” Mueth said.

The menu change alone was notable for a brand that had rarely in its history made changes, preferring the simplicity of a small number of ingredients. “Six meats, one cheese, two bread doughs, very simple,” Mueth said.

Most of the changes were structural, to allow for the LTOs. But it also added combos, enabling customers to get a drink and chips with their sandwich. “It helps us with ticket,” Mueth said. “They’re adding more drinks to their orders.

To be sure, that also involved training. Mueth said that operations and marketing worked with one another to train operators. “We did add chicken,” she said of the chain’s LTO. “It was awesome to add a protein. We did some webinars and some training in the store where needed. It was really smooth.”