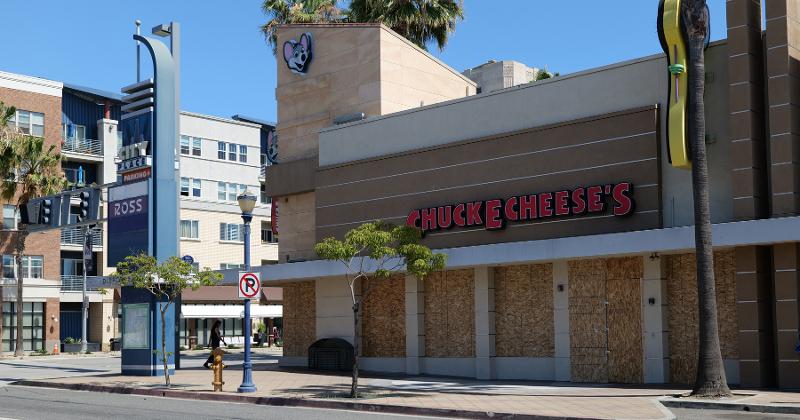 If Elon Musk or Bill Gates were to open a restaurant packed with the coolest in new technology, the interest might fall short of the attention Chuck E. Cheese grabbed when it turned on its animatronics for the first time in 1977. The 43 years that followed have been a rollercoaster attraction of their own, culminating in the family-focused brand’s filing for Chapter 11 bankruptcy protection Thursday morning.

The last few years haven’t been a happy part of the tale. Once publicly owned, and occasionally a Wall Street darling at that, the brand intended to return to the equities market last year through a reverse merger. It was called off well into the negotiations, leaving the chain in limbo. Burdened with about $1 billion in debt, and forced by dining-room shutdowns to forgo the on-premise entertainment experience that was its key point of differentiation, the family-focused operation said it will use the pause in pressure from creditors to regain its footing.

It also affords the brand a potential breather from the bad publicity of recent weeks and years. While Chuck E. Cheese was struggling to remain solvent during the pandemic by cutting personnel and other costs, it went ahead and paid sizeable bonuses to its top executives, even as many restaurant C-suites were taking voluntary cuts in pay.

That was around the time Chuck E. Cheese was bashed on social media for launching a virtual concept called Pasqually’s Pizza & Wings. The hope was that Pasqually’s would come up higher in searches for pizza on the apps and websites of third-party delivery services such as DoorDash and PostMates. Critics accused the company of selling the same old Chuck E. Cheese pizza under an alias to purposely fool consumers.

The concept also showed up frequently in recent years in news stories about fights erupting between parents who were visiting the concepts with their children. Perceived slights to the youngsters would often trigger an altercation, leading to promises of posting security guards in some branches.

Today’s bankruptcy filing isn’t the first time a break from day-to-day pressures was needed. The concept was founded as Chuck E. Cheese’s Pizza Time Theater by Nolan Bushnell, the tech tinkerer who started Atari after inventing Pong, or what is usually regarded as the world’s first video game. It consisted of a module that consumers hooked up to their TVs so two players could scroll a white bar up and down to volley a blip-like ball back and forth and thereby simulate a ping-pong match.

Bushnell, who had worked in the amusement-park industry, hit on the idea while still with Atari of packing a restaurant with arcade-style activities such as Skee-Ball, as well as the next generation of video games. Pizza would be sold to feed the families and generate another revenue channel.

A fan of The Walt Disney Co., he also included animatronic figures that would sing and dance on a dining-room stage. He wanted a coyote to be the star of the mechanical show, and planned to call the operation Coyote Pizza Time. But the automated figure that was created to fit the bill looked more like a rat than a coyote. The mascot was christened Chuck E. Cheese’s and recharacterized as a mouse rather than a rat.

The prototype was owned by Atari, but it bowed out to focus on video games. Bushnell bought the rights in 1978 for a reported $500,000 and convinced fellow Atari executive Gene Landrum to resign with him. Bushnell was CEO, and Landrum served as president of the newly formed restaurant company.

They started building units in California. To jumpstart development elsewhere, Bushnell struck a 280-unit, 16-state development deal with a successful Kansas hotelier named Robert Brock, the founder of Residence Inns.  Brock so liked his experience with the restaurant concept that he decided to spin off a similar venture of his own, called ShowBiz Pizza Place.

The similarities between Pizza Time and ShowBiz locked the two companies in legal skirmishes for years.  Lawyers continued to be enriched by the court combat until a $50 million settlement was struck in 1982.

By that time, video games and animatronic mice were losing their novelty, and entertainment technology had advanced considerably beyond Pong. Sales slid appreciably for the two food-and-fun concepts, presumably along with competitors such as Bullwinkle’s. Yes, it featured an animatronic moose.

Pizza Time had sold itself to the public in 1981. With video gaming becoming an at-home activity and the nation’s economy tanking, dragging restaurant sales with it, Bushnell resigned as CEO in 1984 and the now-public company filed for Chapter 11 bankruptcy protection.

In 1985, it was acquired by ShowBiz in a deal valued at $35 million.  The combined operations became ShowBiz Pizza Time Theaters, the operator of restaurants all bearing the name Chuck E. Cheese’s.

A Steak and Ale veteran named Dick Frank was hired with considerable fanfare to turn around the chain as CEO. His success in engineering a rebound brought a raise in his annual salary to $1 million, or what was believed to be a high mark for chain CEOs at the time.

Those would prove the pizza concept's salad days. Frank updated the concept’s attractions, reformulated the pizza and renovated stores with a design that made their interiors more visible from the outside. The company was rechristened Chuck E. Cheese Entertainment Inc., which was subsequently shortened to CEC, its current name.

But the concept would continue to struggle against obsolescence. It remade the Chuck E. Cheese character into a rock star and phased out the animatronic stage shows. In 2017, it tried a recast as Chuck E. Cheese Pizzeria & Games, featuring advances such as an open kitchen and the replacement of game tokens with credit-loaded cards. The test never extended beyond a handful of units.

By then, the private-equity firm Apollo Global Management had purchased CEC from its public shareholders for $54 a share, or $950 million. Roughly five years later, Apollo sought to return the company to the public markets by agreeing to a 2019 merger with Leo Holdings, a public company in which Apollo held a 51% stake. The deal unraveled last July.