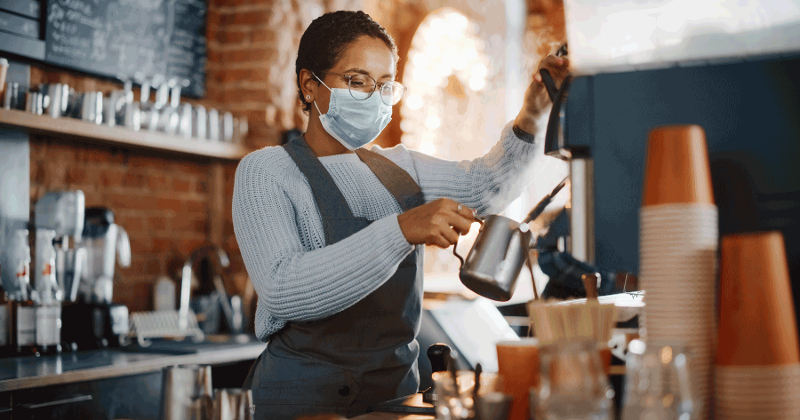 Customers of restaurants in Louisiana and the Bay Area of California have been ordered to wear facemasks again, regardless of their vaccination status, in the latest signs of a backslide toward safety measures that were lifted off the industry in May and June.

In California, facemasks will be required of restaurant guests as of tomorrow in the city of Berkeley and the counties of Alameda, Contra Costa, Marin, San Francisco, San Mateo, Santa Clara and Sonoma.

Los Angeles County reinstated its facemask mandate in mid-July, and the city of Sacramento resorted to the requirement over the weekend.

Masks are also required of all restaurant guests in Washington, D.C., and several smaller markets.

Louisiana’s reinstated mandate applies to all residents and visitors aged 5 years or older. It begins this week and will run at least through Sept. 1, Gov. John Bel Edwards announced Monday. He noted that his state is facing the worst surge in new infections since the pandemic began.

A sizeable number of jurisdictions have strongly recommended that masks be worn again inside restaurants and other public places, but they stopped short of resurrecting a requirement, at least for now.

More mandates are widely expected to follow in other regions as local health officials contend with a surge in COVID-19 cases from the delta variant of coronavirus. A discovery that even vaccinated individuals can spread the strain prompted the Centers for Disease Control and Prevention (CDC) to change its policy on wearing masks.

In late May, the federal agency announced to the surprise of many that fully vaccinated individuals needn’t continue to wear masks in restaurants and other public places.

The CDC reversed itself last Tuesday, saying even fully inoculated individuals should cover their nose and mouth while in areas suffering a surge in new COVID-19 cases. Under the agency’s criteria, the re-instated policy would apply to about 75% of the continental United States.

Some jurisdictions, including San Francisco and New York City, have said they may try to slow the spread of the delta variant by limiting dine-in restaurant service to individuals who can prove they’ve either been fully vaccinated or recently tested negative for COVID.

No major restaurant market is believed to have taken the step of re-imposing capacity restrictions, a safety measure that cut deeply into the sales of many full-service restaurants in 2020.

Although the mask mandates imposed last year often put restaurants at odds with guests who saw the requirements as a limitation of their personal freedom, the new round has not roused a loud outcry from the industry.

“With the seven-day rolling average for [COVID] cases close to the same level as early December 2020, and serious concerns over the contagiousness of the delta variant, we are very supportive of San Francisco and the surrounding counties’ indoor mask mandate announcement,” San Francisco’s Golden Gate Restaurant Association said in a statement. “In a survey last week of our membership with 231 responses, 66% responded in favor of such a mandate for customers and staff.”