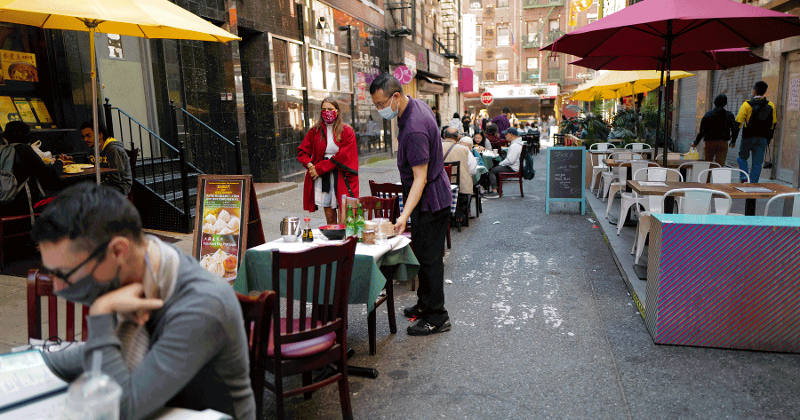 Five days after restaurants in New York City were allowed to reopen their dining rooms, establishments in 20 neighborhoods are facing another suspension of indoor service because of a surge in coronavirus infection rates.

Mayor Bill de Blasio announced his intentions over the weekend, citing a 3% positivity rate in coronavirus testing within the affected areas. Restaurants in nine of the regions, as designated by their zip codes, would be required to halt outdoor as well as indoor service, a further step back from where they were on Sept. 30, when eating places throughout the city were greenlighted to put 25% of their interior seating back in use. The other neighborhoods would be permitted to offer outdoor service as well as takeout and delivery.

Each area would be allowed to resume on-site service again only with government approval, which would be contingent on bringing the percentage of positive coronavirus tests below 3%. Some of the neighborhoods have seen the rate climb to as high as 8%. The city has aimed for a positivity rate of less than 1%, and currently averages 1.5%.

De Blasio’s decision needs to be ratified by the state before the city can take action. New York Gov. Andrew Cuomo has not revealed whether he’ll go along with the second shutdown. In a press briefing Monday afternoon, the Democrat indicated that he will take the interim step of having the state assume responsibility for enforcing safety protocols for restaurants and bars in the 20 hotspots.

Months ago, the governor formed a task force to enforce the rules throughout the state. Those efforts have resulted in the inspection of 1,200 eating and drinking establishments by state troopers and state liquor enforcement authorities. The crackdown resulted in 228 places immediately losing their liquor licenses.

“We don’t make this recommendation lightly,” De Blasio said in a statement. “But science guides our decision-making in this city – and we go where the facts take us.”

A study released last week by the Ford Foundation warned that recovery of New York's restaurant industry could be set back by as much as a decade if the state should suffer a second wave of COVID-19, with sales likely to remain deeply depressed for at least three years. The report, conducted for the foundation by McKinsey & Co., said the damage would be particularly severe for New York City.

Schools and non-essential businesses would also be required to suspend normal operations in the nine most heavily affected regions.

The rise in infections within the targeted areas have been attributed in part to gatherings and activities by religious and community groups.

Elsewhere in the state of New York, upswings in COVID-19 cases have also been reported in Rockland and Orange Counties, the suburbs and rural areas north of New York City.

The city was one of the last major urban restaurant markets in the nation to allow the resumption of dine-in service. San Francisco gave a go-ahead to using 25% of dining rooms on Sept. 30 as well.

Local restaurateurs have warned that thousands of additional neighborhood eating places will close permanently if the city does not quickly restore indoor dining to levels where operations can generate a profit.