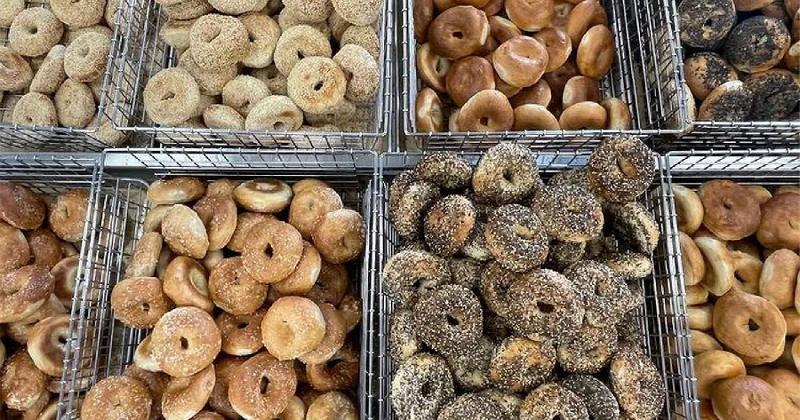 This is a story that was no doubt a fantasy for many people during the dark years of pandemic shutdown. But in Adam Goldberg’s case, the fantasy came true.

Two years ago, Adam Goldberg was just a guy who lived in Connecticut. He had a business selling flood mitigation systems. And, like many during the pandemic lockdown, he and a cousin started messing around with baking homemade bagels “just for fun.”

The bagels they made turned out to be pretty good. And he started selling them under the brand name PopupBagels using a subscription service. Fans could order ahead and pick up their bagels at certain popup locations and designated times.

Cut to: This week.

PopupBagels closed on a second round of seed funding that raised what Goldberg described as “a few million dollars. More than a couple,” though he declined to disclose specifics. That funding comes in addition to about $250,000 raised at the end of 2021 to expand the brand.

The latest funding round was led by Hollywood film producer John Davis, who was also a key investor backing brands like Blaze Pizza, Wetzel’s Pretzels and Dave’s Hot Chicken.

Joining Davis in the PopupBagels round are other high-profile names, including actors Patrick Schwarzenegger and Paul Rudd; NFL players JJ and TJ Watt, along with swimmer Michael Phelps and former professional football player Michael Strahan and partner Constance Schwartz-Morini of SMAC Entertainment.

The group also includes angel investors Matt LaCasse, Paul Applebaum and Sam Hendel; as well as sports business analyst Darren Rovell, who also participated in the first round with his group Tastemaker Capital.

Now Goldberg has the capital to expand a concept that has struck a chord, not only for its efficient, lower-cost model but also because it taps into a certain nostalgia for a tradition of gathering friends and family for freshly baked bagels on a weekend.

Goldberg, who grew up in New Jersey but lived in New York City before moving to Connecticut, said people go to bagel shops today to stand in line for 30 minutes for more of a sandwich with exotic fillings that might be eaten alone on a park bench.

But in his childhood, Goldberg said he remembers a dozen or so bagels were brought in fresh and still warm for the family to share and enjoy together.

“We bring it back to that sense of community,” he said. “We have a lot of families that buy and share their bagels together. Maybe the houses on a cul de sac will pick up two dozen and they’ll come out of their houses to swap or even eat them together.”

PopupBagels has two brick-and-mortar pickup locations, where the dough is made, along with the ever-changing variety of schmears, from the best-selling dill pickle schmear to a roasted red pepper cream cheese or white truffle butter.

But the bagels can be picked up out of roving popup locations in other restaurants, like Union Square Hospitality Group’s Daily Provisions on occasion. Goldberg said wherever they go for popups, the bagels are always boiled, seeded and baked there, so they can be fresh and warm at pickup.

PopupBagels are about 30% smaller than what is typically found at New York bagel shops. Goldberg likes the idea that people could try more than one, and “it doesn’t require a nap” afterward.

“We like to say it’s got the chew and the crust without the lead in the belly,” he said. They sell for $38 per dozen, which includes two artisan schmear choices.

Fueled by coverage in The New York Times, the brand—with the tagline “not famous, but known”—has more than 350 subscribers who order online, pay ahead and pick up weekly or twice monthly, Goldberg said.

PopupBagels is not designed to be a traditional retail bagel shop, he said. The pickup locations are only open to the public Friday through Sunday, for example, and there’s no need for expensive real estate in high traffic locations. One of the pickup spots is behind a bike shop on an alley, for example.

“We have no interest in flashy storefronts,” he said. “We look for underutilized spaces. One is a catering kitchen that doesn’t do any business in the mornings, so we’ll do it as a shared lease. We only need to be in there until noon.”

Pickup locations can be run with as few as three employees, and Goldberg said they will look for easy car access, like a drive-thru or parking spot for curbside service so people don’t have to get out of their cars.

Now CEO, Goldberg said the company is now hiring an operations team to support expansion plans that include opening three or four more locations in the greater New York area within the next four to six months, and another five to 10 after that.

Franchising is “definitely a consideration,” though right now the focus is on beefing up production and rollout capability, he said.

Goldberg said he still has his flood mitigation business and he’s managing to do both, though he spends less time actually baking bagels. He currently has about 15 employees, but that team is likely to grow fairly rapidly. Goldberg is hoping to have the brand in Los Angeles within about 18 months.

“I just started making bagels on the weekend for friends. And eventually tertiary friends were messaging me saying, ‘how come I don’t get your bagels.’ Then a couple of food bloggers tried our bagels. Next thing you know we were written up as one of the best bagels in Connecticut, and I had never even sold a single bagel yet,” he said. “So I had a friend who was a chef and had a commercial kitchen who said, let’s see if we can sell these. … And we did. From there, it’s just kinda history.”