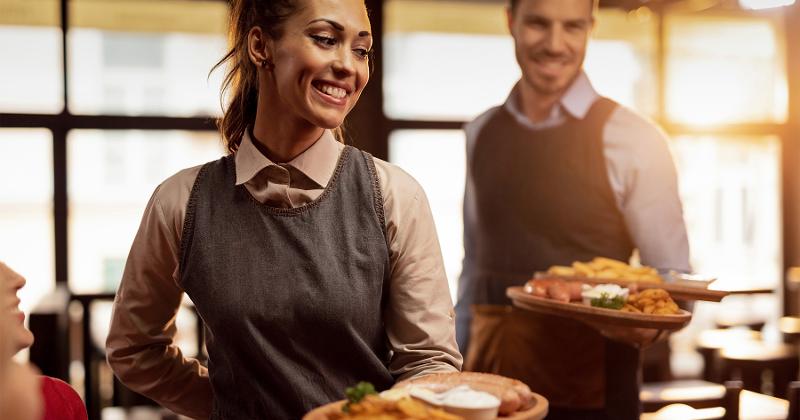 Before we lace on the boxing gloves, Nancy, what does a fashion trend-setter like you (the tutu is a bold statement) think of this server’s uniform I’m rocking? Does it work with the spats?

Readers have been imploring me for years to consider a career change, but that’s not why I’m sporting this logoed polo and chinos. I’m thinking of dining out this week, and I might as well fit the crucial new role restaurants are giving guests. If I’m going to provide the service I once got from a staff member, I might as well look the part.

You might remember service. That was part of the reason diners went to a restaurant. Someone would seat you at a table they cleared and cleaned; take your order; present the meal, ideally with a little flair; keep you supplied with drinks and add-ons; and then settle up the check. The guest’s ascribed function was to sit back, enjoy the experience and then show your appreciation via a tip.

We should have realized things were heading in the wrong direction when the big fast-food chains started handing customers a cup and pointing them toward the soft drink fountain. Youngsters might think this is akin to grandpa’s blather about walking 5 miles uphill to school, but there was a time when guests always, always had their drinks served.

By that point, the business had already brainwashed us into bussing our table after a meal so a staffer didn’t have to do it for the next customer.

Now it’s just a matter of time until an order taker hands you a spatula and rattles off the new policy of having patrons cook what they want.

Think about it: In today’s model restaurant, customers input their order via phone, kiosk or tablet and lug at least part of it to whatever table they can find for themselves. They can keep the drinks and food coming by touching one screen or another, and then settle up the tab themselves.

You go through a whole visit with no more human interaction than telling the food runner who gets what order.

It’s enough to get me to drink, though light and air also have that effect. And of course, if I do indulge in a beer or two, the chances are rising that I’ll have to draw it myself from a wall of self-serve taps.

I know, I know: Lots of patrons prefer that frictionless service. Plenty of people also thought Val Kilmer was the best Batman. I can only tell you that I miss the pampering, if you can use that label for a fellow human saying, “Enjoy your meal.”

Strangely, there’s a growing sentiment that old-schoolers like me will see service return to familiar levels with the growing use of robots. The theory is that using what look like roving barstools to deliver meals tableside or cart away used service ware will free actual carbon life forms to interact more readily. It’s a way of getting the highest touch out of the people restaurants manage to hire.

There’s a major flaw to that theory, and it’s surprising the dynamic isn’t being discussed more in the business. The service crisis besetting the industry isn’t just about shifting functions from staff to guest or hiring R2D2 to shuttle over desserts. There’s also the matter of a monumental change in the job candidates available for hire.

First-time job holders have often taken restaurant jobs because they lack the life and work experience needed to land something more lucrative and less wearing. Now, with opportunities abounding even for the greenest prospect, the pool is packed with candidates who’ve been passed over by other industries. Restaurants would never have considered them 10 or 15 years ago because of concerns about performance. But today, they look golden if a pulse is there and they can fog a mirror.

Chains have been grousing as they fill openings left by the pandemic that new hires are appreciably less productive because they lack experience and fundamental job smarts.

The prospects might also have a murkier notion of what high-quality service should be, since they’re not exactly immersed in it. The service crisis isn’t peculiar to the restaurant industry.

I may joke about it here, but the redefinition of service is an issue with profound implications for the business. If that traditional part of the experience is recast as just a matter of providing convenience, it’s going to make speed of service the key differentiator for much of the trade.

It also could redefine “fine dining” as “fine service,” with food quality a side matter.

Of course, restaurants’ version of service would only get worse if I used my new outfit to actually land a server’s job.

You never did say what you thought of it. Is the ascot too much?

So, Peter, there’s a lot to unpack here, not the least of which is the image of you in ascot and spats. While that isn’t a pretty picture, I do get your larger point about the sorry state of service. And though I don’t think we’ll need boxing gloves to sort things out, I do have a slightly different take on the subject.

Fact is that dissatisfaction with restaurant service has been an issue for as long as we’ve had restaurant servers, but I’d argue that it became more pronounced a couple of decades ago as we moved through the culinary revolution that turned cooks into chefs and chefs into major celebrities; gave rise to food-dedicated broadcast media like the Food Network and digital media like Epicurious; drove the meteoric growth of educational institutions like the Culinary Institute of American and Johnson & Wales University and all their state-and-local brethren; and turned ordinary Joes into food critics.

Unfortunately, there has been no parallel elevation and lionization of the front-of-house employees. The clichéd view of waitstaff as actor or model wannabes biding their time until they hit it big still holds sway in many quarters, despite the fact that there have always been superlative servers committed to pleasing their patrons.

The situation has deteriorated post-pandemic. Shutdowns threw dining-room workers out of work; worse still, when they came back they back found themselves on the front lines, dealing with unruly patrons refusing to comply with mask mandates, complaining about menu outages, enraged by slow service and generally behaving like thugs.

Frankly, it’s enough to make even their robotic replacements throw in the digital towel and wheel their creepy-cute little metal carcasses right out the front door.

I suspect that we are largely in agreement so far, Peter, but we do part ways on several points. Drawing your own drink may not be your cup of tea, but I bet it represents both the perception of speedier service and the reality of bottomless refills for customers at limited-service venues. Regardless of why the practice started, I think it would provoke patrons into storming the parking lots with pitchforks if it went away.

Similarly, I’m surprised at your avoidance of self-serve beer taps—or any beer taps for the matter. I’ve not seen supporting data, but my hunch is that the emerging DIY (draw-it-yourself) beer operations are considered pretty cool. The imposing wall of taps is a design focal point that’s still new and newsworthy, and the number of taps and variety of options likely facilitates experimentation and sharing.

And despite your reservations about bussing your own table, it doesn’t appear to negatively impact the ratings of Chick-fil-A, which for the eighth year in a row sits atop the list of consumers’ most-preferred chains. Legendary for its commitment to customer service, the brand takes extra steps to enhance the larger service experience, like the presence of dining-room hostesses or the Mom’s Valet program in some locations.

The latter, which was developed by a Florida franchisee, allows parents with a car full of kids to alert staff as they order at the drive-thru. This sets in motion not only food prep, but also a veritable chain reaction, no pun intended, in the dining room. This includes the selection and setting of a table, deploying of the appropriate number of highchairs, filling of drinks, and delivering of food and condiments to the table when the patrons come through the door with tykes in tow. Being Chick-fil-A employees, they’d likely even cut up the meat if asked, all with an accommodating smile and a perky “my pleasure.”

Chick-fil-A is the exception that proves the rule, which is that we’ve never had a true service ethos to underpin restaurant operations; in fact, I don’t believe that service has ever been viewed as a worthy and worthwhile profession in most any industry here. But Chick-fil-A proves both that it can be part of a brand’s DNA and that patrons will reward it. Richly. There is no doubt that it may involve more heavy lifting throughout the screening and training process, especially when job applicants are seriously inexperienced, but the payback is evident.

Does the future hold dining rooms populated by robotic greeters, seaters, servers and bussers? I doubt it. I am with you on the increasing need for high-touch experiences, and I believe patrons will vote with their feet if the operator goes too far in de-humanizing the dining experience.

Now about those boxing gloves: I’m going to donate mine to embattled airline employees, like the flight attendants who’ve been physically assaulted at 30,000 feet. I bet many would happily hand off to R2D2 as they parachute into the sunset.