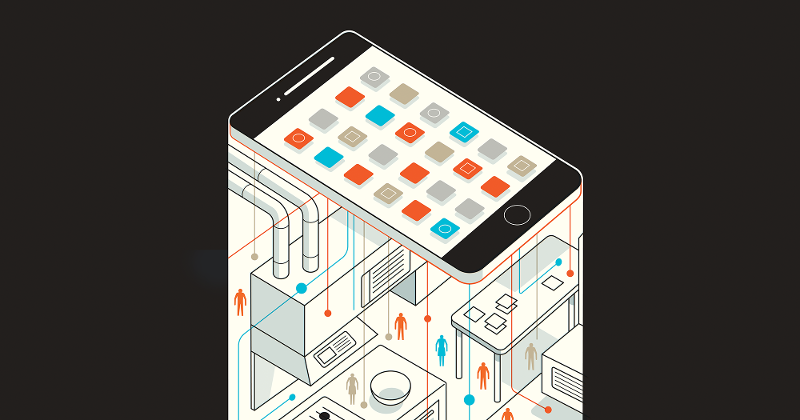 Back in the Dark Ages of restaurant technology—say, five years ago—most of the gee-whiz advances fell either into the category of consumer-facing innovations (apps, ordering kiosks, customized marketing capabilities) or back-office enhancements (kitchen display systems, labor scheduling tools, social media monitoring). Today, according to participants at this week’s New York City Restaurant Technology Summit, the digitization of foodservice is evident in all aspects of the business, from restaurant development to determining whether a fork should be included in outgoing orders.

Here are some of the on-the-edge applications that were cited during the half-day event.

Monitoring culture and morale
Celebrated New York City restaurateur Danny Meyer revealed in a video shown to open the event that his Union Square Hospitality Group now uses tech to get a quick read on how members of the team feel on any given day about working for the 20-concept operator. “We look at what we call the Trust Index. It’s a variety of questions that boil down to, ‘Are you happy to come and work here?’” Meyer explained.

The canvass of employees is done digitally. A “no” indication usually means the employee’s experiences aren’t matching up with his or her expectations, and that means attention is needed from management. “Early on, we can take steps to address what needs to be fixed,” Meyer said.

Picking sites based on traffic, not rooftops
Twelve-unit Velvet Taco is relying on the location feature of smartphones to get a read on where consumers actually are during the day or evening, and then choosing new restaurant sites accordingly, revealed CEO Clay Dover. He noted that locations are traditionally chosen by chains on the basis of how many people live in an area and what their spending capabilities might be. But where those consumers live might not be where they spend their leisure time, he pointed out. “Are people actually out in this area late at night?” he said.

Velvet Taco is putting its tech dollars into site selection because of the cost implications, Dover continued. “The biggest investment you make is in site selection, because once you open, you’re done,” he said.

Picking sites based on traffic, take 2
An alternative siting strategy wasaired by Matt Weinberg, CTO of &pizza. The Washington, D.C.-based chain had announced five days earlier that it plans to put high-tech trucks on the streets in part to gauge what might be a good location for a future &pizza unit. The vehicles are supplied by Zume, a Silicon Valley company that uses advanced technology to determine where and when the trucks should park and peddle pizza. Zume refined that capability through its own all-mobile restaurant concept, Zume Pizza.

&pizza also intends to use the trucks at highly trafficked events such as concerts and fairs, and to introduce the brand in new markets.

Upselling without fatigue
Snooze, an A.M. Eatery and the Good Times regional burger chain are testing a system that uses artificial intelligence to “converse” with guests when they place an order, according to the system’s supplier, Valyant AI. One of the capabilities highlighted by Valyant CEO Rob Carpenter is the technology’s ability to upsell a patron without exception. A human order-taker may be too harried during a lunch or dinner rush to ask about an add-on, or may stop asking after being repeatedly turned down. The software driving the system doesn’t suffer that sort of fatigue or anxiety, Carpenter asserted.

He revealed that the system once successfully upsold 23% of the customers whose orders it fielded, though he acknowledged that he wasn’t sure trade-ups spiked that day.

Being greener through tech
Snooze CFO Bill Long described how his operation, a concept open only for breakfast, brunch and lunch, is embracing technology to promote sustainability. The regional concept is committed to composting as part of its effort to be greener, but not every market has an infrastructure in place to support that diversion of waste from landfills, Long explained. In those areas, Snooze is installing biodigestors—devices that are sometimes called mechanical stomachs. Using bacteria, the machines decompose food waste on-site into water, which can be safely pumped down drains, and small amounts of organic material that can be used as a natural fertilizer.

Long also disclosed that Snooze is using the tech-free approach of inviting unit employees to become “green captains.” The volunteers are paid to spend three to 10 hours per week educating their co-workers on sustainability and how to promote it, Long said.

Another speaker mentioned in passing that a new white-label app—a generic piece of software that can be customized into a chain's proprietary customer app—features a button that lets delivery patrons opt out of getting disposable cutlery with their orders. The aim is to keep more plastic out of the waste stream.

The Restaurant Technology Summit was presented by the consulting firm CohnReznick in collaboration with Results Thru Strategy, a consortium of consultants; ICR, a communications and investor-relations firm; Jefferies, a financial services concern; and the New York City Hospitality Alliance, an association that represents restaurants, bars and nightclubs.