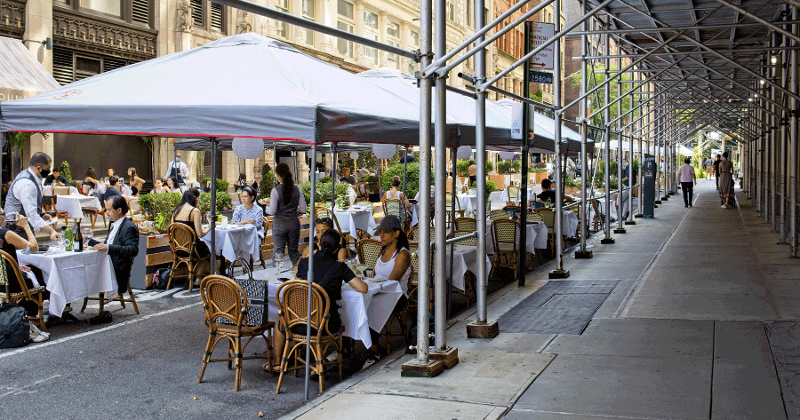 A second wave of coronavirus infections in New York could delay the comeback of restaurants in the state by another three years, with the severity and length of the setback depending squarely on the effectiveness of public health and economic measures, according to a new study from McKinsey & Co.

The report pegs the possible closures at 10% to 15% of the state’s current restaurant population, or 10,000 to 15,000 establishments, a retraction not likely to be offset for five to 10 years. Restaurant employment would similarly fail to rebound for that stretch, McKinsey said.

It noted that the damage would be particularly severe for New York City, one of the nation’s most influential dining-out markets. A resurge could prompt up to 40% of eating places in the five boroughs to shut their doors in 2021 and 2022, with sales sliding 35% to 40%, according to McKinsey. Most of the shuttered places would be independents, the researcher said.

It described the prospect of a major second wave of infections as a very real possibility.

“Depending on multiple factors, including herd immunity, human behaviors, hospital capacity and readiness, and policies, New York might see a second major wave of the virus in the fall, perhaps coinciding with peak flu season,” reads the report, which was conducted by McKinsey for the Ford Foundation. “The COVID-19 pandemic is not a point-in-time crisis. Instead, the pandemic is an extended, multi-month, possibly multi-year event that could last until the virus has been contained and therapeutics and vaccines are available.”

The 54-page report provides a detailed snapshot of the New York and New York City restaurant markets, with reams of data on the demographics of workers, the importance of the industry to the state and city’s economies, and what other research to date has revealed about the impact of COVID-19 and the pandemic.

The demographic information and other employment data figured prominently in a public presentation this morning by the Ford Foundation in collaboration with One Fair Wage, the union-supported initiative that aims to disallow the tip credit and mandate payment of a so-called living wage for all employees. The report is entitled, “Reimagining a Sustainable Restaurant Industry in New York.”

However, much more of the report was devoted to prevailing conditions than to potential new models for the business.  One Fair Wage and Ford Foundation representatives were more forward-looking in their presentations during the virtual event. Saru Jayaraman, president of One Fair Wage, reiterated her call for discontinuing the tip credit in New York and elsewhere, while other presenters stressed the need for significant change to narrow the wage gap between front-of-house and back-of-house workers.