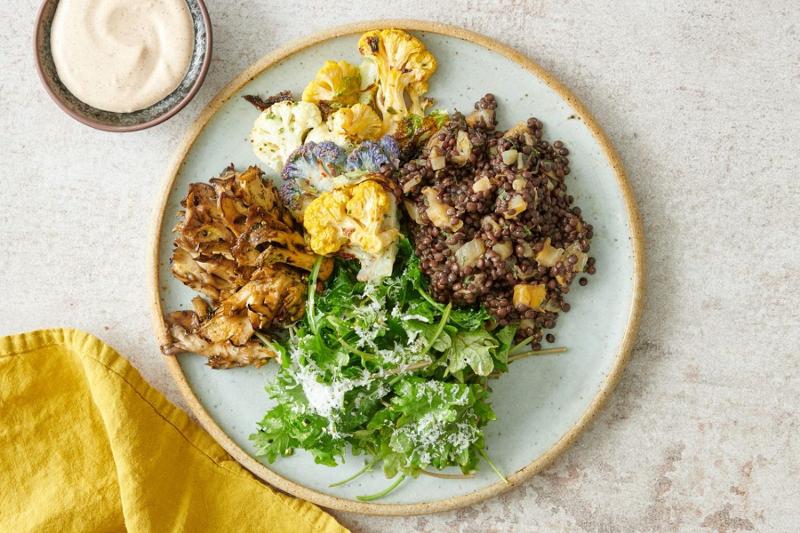 Harald Herrmann likes to think of One Table Restaurant Brands as a blended marriage.

The Los Angeles-based company created by the 2021 combination of fast-casual brands Tender Greens and Tocaya Modern Mexican brought together two parents, each with one child—both girls—to create a new family.

“It’s really finding your way forward as this new entity, this new family,” he said. “That’s been the work of the past year, this integration of both teams, both companies.”

Herrmann, the former president of Darden’s Specialty Restaurant Group, was brought in post-combination as executive chair of One Table when it was announced in August 2021 that the two brands would come together under one roof. Soon after, he also took the role of CEO, though there was no formal announcement of that move.

Investors behind the new entity tapped Herrmann because of his experience growing emerging brands, he said. But he is also a veteran of coaching restaurant companies through transition.

Herrmann joined Darden in 2012 with the acquisition of the beer-focused casual-dining concept Yard House, which he co-founded. He left Darden in 2016 and was named CEO of the fast-casual sandwich chain Mendocino Farms after that chain’s acquisition by private-equity firm TPG Growth.

During the pandemic, Herrmann was CEO of the Second Harvest Food Bank, which was a step away from the restaurant industry, but one that kept the impact of Covid top of mind, he said.

Herrmann described the first year for One Table as “50% turnaround and 50% startup.”

“The turnaround component is the reinvention post-Covid, and how business is going to be done moving forward, because it has changed,” he said.

The “startup” aspect is the work being done now to build new infrastructure for growth.

Herrmann said both the 26-unit Tender Greens and the 19-unit Tocaya brands are expecting to start growing again in 2024.

The first step, however, has been a focus on people.

At the corporate level, last year Rudy Sugueti—the previous COO of Tocaya and The Madera Group, and a former executive with CPK—was named president of the Tocaya brand. On the Tender Greens side, Craig Carlyle, who worked previously with Herrmann at Yard House and was later COO of Stacked: Food Well Built, was named president.

Huntley Castner, formerly co-president and CFO of Veggie Grill, was named One Table’s CFO about two months ago.

Gone following the combination, however, are former president and CEO Denyelle Bruno, as well as former CFO Lina O’Connor.

And Herrmann said the company has been working on staffing at the restaurant level, both management and hourly workers. That has been a challenge given the turnover and churn within the industry as a whole.

“We’re still finding our footing,” he said. “We’re not as consistent as I’d like us to be.”

But Herrmann said it’s like rowing a boat out of a storm. The further they get from the hurricane of Covid, the stronger they become.

Tender Greens and Tocaya came together in part because they are both premium, fast-casual brands built around menus that focus on fresh, healthful ingredients. The investors behind the brands, which include Danny Meyer’s Union Square Hospitality Group and investment firms Alliance Consumer Group and Breakwater Management, continue to back the new entity.

Step two in the combination transition has been looking for ways to mine synergies with the supply chain, as well as integrating the tech stack.

There are other tweaks ahead. This year, Tender Greens, which is 17-years old as a brand, will go through a menu refresh, he said. And both brands are planning enhancements to the beverage offerings, though details are yet to come.

Tender Greens, for example, this month launched a new Longevity Bowl, starting at $12.95, with ingredients inspired by the Mediterranean Blue Zone, known for producing the most centenarians. Tocaya, meanwhile, added fried maitake mushrooms as a taco option.

Improving the delivery experience is also a key focus, with about 60% of sales still off premise, he said.

The average unit volume for Tender Greens is $2.9 million and $2.5 million for Tocaya, Herrmann said. As both brands rev up for growth, the footprint of units will likely shrink.

Currently, restaurants for both brands are generally over 3,500-square-feet, but Herrmann would like to get that down to around 2,500-square feet, with locations that might have shared or communal seating, like lifestyle centers, food halls or co-tenant arrangements.

Restaurants will be designed to ensure ease of delivery and takeout, including possibly drive-thru lanes for pickup of digital orders, he said.

These are all changes driven by the need to meet post-pandemic consumers where they are, but both Tender Greens and Tocaya hope to recapture the in-restaurant diner. Fundamentally, the quality is better for those dining in restaurants, he said.

The two brand sisters have different needs and personalities, said Herrmann. He feels his job is to let them run free—without letting them run off a cliff.

“Both brands, when they were founded, had an incredible origin story. We are basically bringing that back to life,” said Herrmann. “We’re letting them come into their own again.”