Starbucks today opened its first Reserve store, a high-end concept that slings Italian liqueurs and food alongside espresso shots in a space about four times the size of a typical unit. The chain says it plans to open up to 1,000 of the ritzy shops worldwide as it takes advantage of what founder and Chairman Howard Schultz called a “major inflection point” in the price of prime real estate.

Landlords will be forced “to permanently lower rent rates” to make up for the death spiral of brick-and-mortar retail, Schultz wrote in a memo to his leadership team, according to Yahoo Finance.

“Trust me, rents are coming down!” he wrote.

Schultz stepped down from day-to-day leadership of Starbucks in 2016 to focus on the brand’s Siren Retail arm, which includes the Reserve stores and its supersized, interactive Roasteries.

The first Reserve unit, located on the ground floor of Starbucks’ Seattle headquarters, is 8,100 square feet and connects to a 10,000-square-foot Princi bakery, according to The Seattle Times. Starbucks invested in Princi in 2016, and the Italian bakery now prepares all of the food for the Siren Retail units. 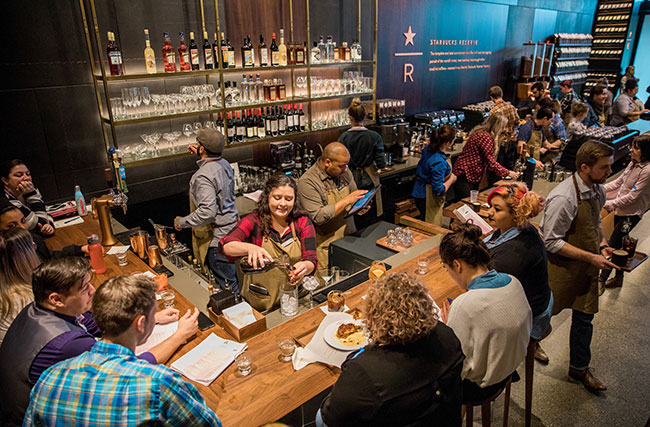 The space includes community tables, lounge areas, fireplaces and a large glass wall into the Princi kitchen so guests can watch breads and pastries being made.

Starbucks launched its Evenings program in 2010, eventually selling beer and wine at more than 400 U.S. units, before suspending it early last year. The company hopes the Reserve format inspires guests to linger and take advantage of the bar menu later in the day.

“We want to be a part of the community and are looking forward to being a stop on the way to sporting events, on the way to theater, on the way to concerts,” Shauna McKenzie-Lee, director of operations for the Siren Retail line, told The Seattle Times.