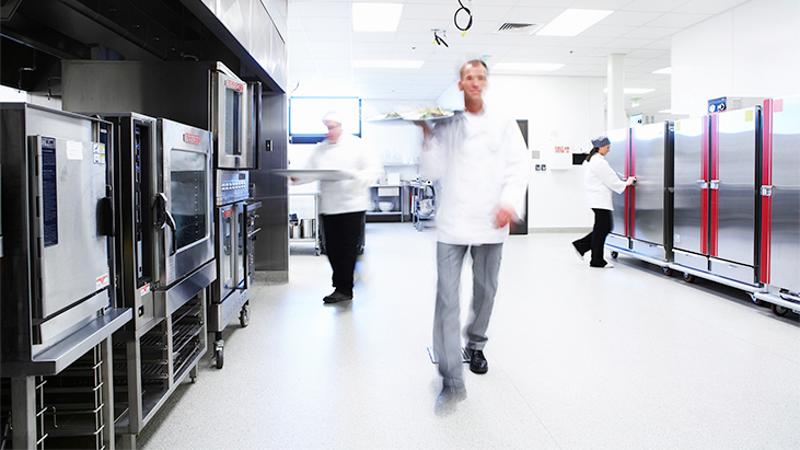 Of the thousands of operators walking the halls of Orlando’s convention center during the NAFEM Show, some simply shop for upgrades to their tried-and-true kitchen equipment. Others have radical ambitions. But both groups are focusing on the same themes: advanced technology and energy-saving features.

Energy management is key for Jack Willingham, senior vice president of construction and architecture for CKE Restaurant Holdings, parent of Hardee’s and Carl’s Jr. “There’s a department in my division that works on energy full time, testing equipment, lighting fixtures, systems and add-ons,” he says. Recent advancements include a proprietary charbroiler that consumes 11% to 14% less fuel than prior models, and an energy management system that does daily startup and shutdown, and controls lights, hood ventilation and electrical components; it’s led to a 20% reduction in energy usage. The charbroiler is now in use in about 3,000 units, and the EMS is used throughout both chains.

While the company’s current EMS supplier keeps it apprised of tech advancements, Willingham says he and his team are going to the NAFEM Show primarily to find to find “anything new on the horizon in energy management systems.”

Buyers at Freddy’s Frozen Custard & Steakburgers are thinking along the same lines. “Energy consumption is a controllable expense,” says Pat Sardo, senior director of construction. “A fryer, flat grill, refrigeration and so on are necessities, but we’d like to reduce costs with efficiency.” The chain is watching for energy-saving enhancements for both new and existing equipment, and for both new and mature restaurants, Sardo says. “But we’d like to focus specifically on automation enhancements for systems like lighting controls and HVAC,” she says.

At Fatburger, the biggest focus is on front-of-house technology, according to James Newell, vice president of operations. He ticks off questions his team wants to answer: “What can we do to engage millennials as they wait for their order to be made? What will raise the average ticket?” After having installed Wi-Fi in units last year, Fatburger is exploring kiosks or tabletop tablets for do-it-yourself ordering and payment.

Back of house, Newell isn’t seeking radical innovations: “Whatever keeps our employees safe, lets them use four steps instead of six.”

Asian Box is also focused on tweaks to the back-of-house basics. “We’re looking for grease-free grills and advancements in steamers that we use to steam vegetables and rice,” says Frank Klein, founder and CEO. “We’re always looking for a steamer that’s easy to clean, uses less water and is more energy-efficient.”

For the front of the house, he’s thinking along more revolutionary lines, seeking “a kiosk ordering system to be integrated with our POS to expedite customer service and throughput.” The kiosks will complement a preordering app that Asian Box instituted in 2016 and, Klein hopes, will help improve both the experience and the bottom line.