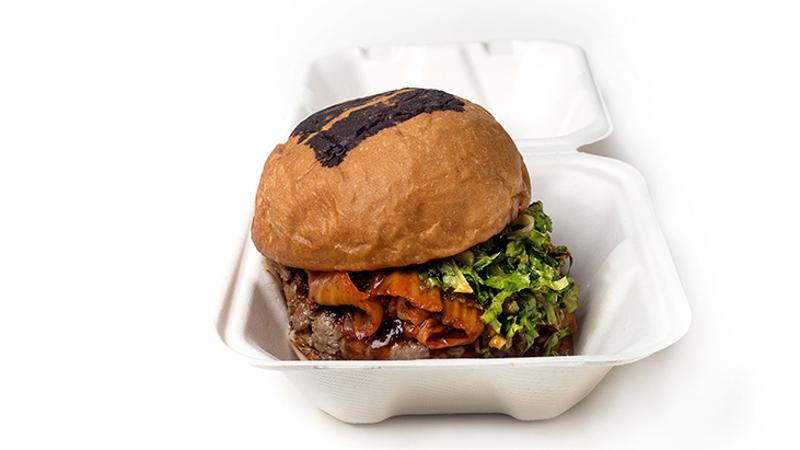 The emergence of on-demand delivery—and consumers’ growing want and expectation of it—has forced the hand of several operators to offer the convenience, including concepts with foods not necessarily designed for delivery. That’s the case for Los Angeles-based Umami Burger. In order to stay competitive, the burger chain partnered with a few third-party delivery companies about a year ago. One challenge, according to VP of Operations Gregg Frazer, was retooling its packaging with a much longer order-to-consumer time frame in mind.

Umami offered takeout before. At the time, it wrapped burgers in white butcher paper and put them in a paper bag to go. “It’s not the worst way, but only for someone driving five minutes home or to the office,” says Frazer.

“For most takeout, especially lunch with a 10 to 15 minute travel time, guests are waiting in the restaurant, so the clock begins as soon as [food] leaves the kitchen.” But delivery is a whole new platform from a timing perspective, he says. Worst-case scenario: Food sits for 20 minutes waiting for the deliverer to arrive, then takes it 15 minutes to drop off; now there’s a burger more than half an hour old, Frazer says.

Step one for the chain was to rethink the paper. Umami switched to an eco-friendly clamshell-style box. “Not a Big Mac box—which actually works quite well because they allow for airflow so it doesn’t sog out—but one with a portion of the bottom that raises the bun up to prevent sogging,” says Frazer, a concern since the burgers, cooked medium-rare, have juices running out. One other key factor for ensuring a better delivery is that burgers fit snugly inside the box. For any food that’s being delivered, he says, it’s crucial to find the appropriate-size vessel that stays closed, with a lid that doesn’t pop off. “You could turn it upside down, and it wouldn’t have an effect,” he says.

Frazer admits he hasn’t nailed it perfectly quite yet. “Because our food travels so poorly, we’re always looking and searching for that magic vessel. Especially for fries; there isn’t a dimension out there yet for fries to travel,” he says. He says that consumers are a little more tolerant of burgers not traveling well, but it’s still painful.

Another compounding factor is relying on third-party services to pick up and deliver within a certain time frame, which doesn’t always happen. For its restaurants that have a high volume of delivery, such as the San Francisco and New York City units, Umami added a hotbox-like warming cabinet, so staffers can stage food prior to pick up, and it never sits under a heat lamp. “It’s like a catering box,” he says.

To help prevent excess holding on delivery orders, the chain also upgraded its POS system. The program can coordinate the right pickup time based on when the food is fired and will be ready, eliminating some of the human error.

Still, even with the new packaging and technology, timing can be an issue when delivery services don’t pick up food quickly. Umami can’t use just one platform, because it would eliminate a base of customers, so Frazer has found workarounds with those that don’t have as many standard operating procedures in place. For example, he met with one third-party company to discuss the problem of having to throw away food that sat for too long. That company issued him a credit card; now every time a restaurant has to dispose of food and refire, Frazer charges it back to the deliverer.

While the amount of packaging needed in Umami stores is up, stocking it isn’t necessarily a cost consideration. Restaurants are responding to the demand as delivery grows and building up inventory. “There’s a cost, but to-go packaging still is pretty negligible,” says Frazer. Going from no delivery to heavy would be about a 2.5% to 3% increase in packaging cost, he says, which would have an impact. But the incremental sales offset that, he adds. “It’s the cost of doing business.”