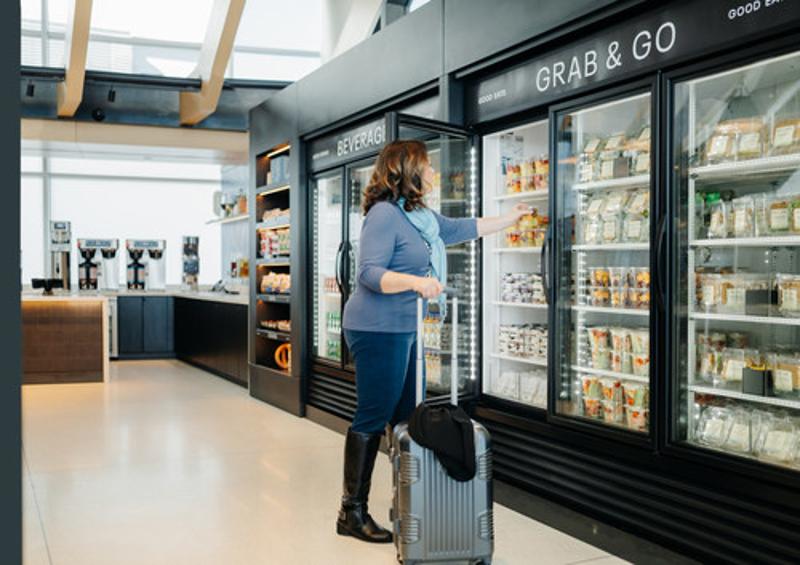 United Airlines is trying a grab-and-go version of the usually upscale lounges it operates in airports for members of its United Club elite-travelers program.

The facility, just unveiled in Denver International Airport, sports banks of coolers and shelves packed with food items, not unlike a convenience store.

The outlet features the same sort of technology that eliminated the need for cashiers at Amazon’s Go c-store experiment. Travelers gain entrance by having their boarding passes scanned at an entry gate. Once inside, they can select what they want and walk out. The underlying technology calculates their tabs and charges it to their credit cards.

Coffees and coffee-based drinks are prepared at a full-service coffee bar where customers are still spared the need to pay then.

Only non-alcoholic beverages are offered.

The emphasis is on speed and convenience, according to United.

It says the new format is intended to meet strong demand from flyers for food and beverages they can take onto their planes and consume in-flight. About 54% of visitors to a United Club say they like to have a snack or meal onboard.

“We know there are times when our members are in a hurry and use our clubs to sneak a quick drink or snack, so we've created this new format to make it easy for them to do that without sacrificing an upscale club environment," the president of United’s Mileage Plus frequent flyer program, Luc Bondar, said in a statement.

Access to what United calls United Club Fly is limited to the same travelers who have access to its airport lounges elsewhere. According to United’s website, that means either paying a $525 annual membership fee, buying a premium seat on an international flight or buying a one-day pass.

The airline isn’t abandoning the sort of club lounges it runs in other airports. It recently renovated its 30,000-square-foot facility at Newark International Airport to include such additional perks as on-site shower facilities.

The Denver airport is a major travel hub for United.