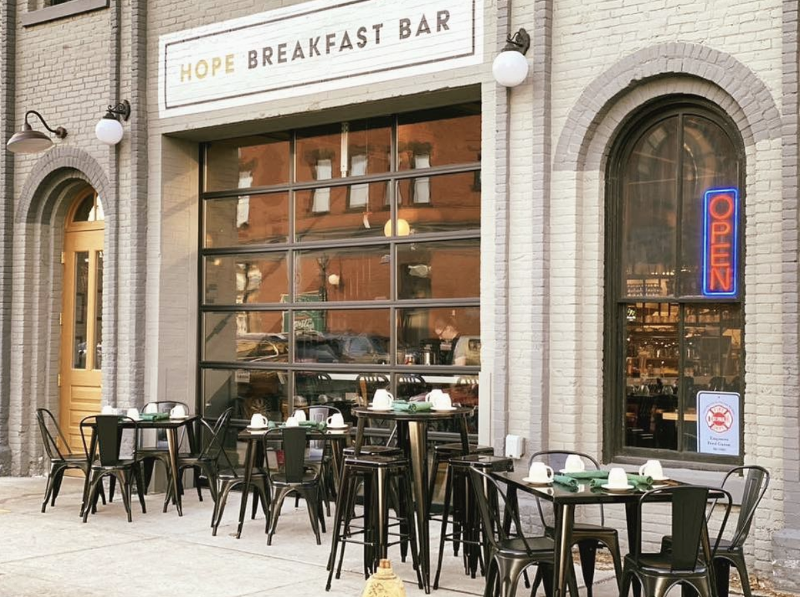 Brian Ingram was hoping to open his restaurant on Monday.

He’d spent much of the past week getting Hope Breakfast Bar in St. Paul ready to serve paying customers for the first time in months. Workers were trained on new procedures. Barriers were installed to keep the coronavirus from spreading from one set of customers to the other.

Protests over the death of George Floyd changed that. “We were going to open,” he said. “But with all the hurt and the madness going on, it didn’t make sense that we would open and try to run a normal business.”

For restaurants in urban centers around the country, the protests and violence of the past few days has delayed the reopening plans many operators had for this week. Numerous chain and independent restaurants, including many in central cities that had been in danger of going out of business, have been damaged, opted to delay openings, or both.

Violence and protests have come as many cities and states began steps to reopen dining rooms, or at least their patios. Government officials, however, have yet to take the step of delayed reopenings—Chicago Mayor Lori Lightfoot said her city’s restaurants will be allowed to reopen.

“We will reopen tomorrow and take this important next step as planned,” she said in a news conference on Tuesday.

Individually, however, some operators are taking steps to delay openings, either to repair damage or out of respect for the cause that sparked protests in recent days.

Some operators have opted to hold off on reopening until they feel it’s safe.

At Chicago's Gene & Georgetti's, the same company that helped the restaurant rebuild after a fire in October returned Sunday to help the looted establishment board up.

Historic memorabilia, including a poster from the 1970s signed by comic Lucille Ball, has been taken off the walls and moved to a secure location. Any remaining liquor has been locked up.

“We are going to remain closed until it's safe to reopen,” Michelle Durpetti, whose grandfather started the steakhouse in 1941, said. “I don't want to put my team at risk or any customers at risk.”

The patio of Red Arrow Tap Room in Naperville, Ill., was bustling Friday, open for the first time since the coronavirus pandemic began. “It was great to see guests back,” says founder and CEO Joseph Tota. “It was a really great weekend.”

But the revival was short-lived. By Sunday, Naperville was recommending businesses close due to protests over the death of Floyd at the hands of Minneapolis police. On Monday night, Red Arrow had its windows broken with bricks after peaceful protests turned into rioting.

“Just when we get started, we had to shut down again,” Tota says. The full-service restaurant had been doing takeout and delivery during the shutdown, but “It wasn’t nearly the sales we typically do,” he says.

Workers were coming to repair the glass, and Tota says insurance will pay for the damage. He hoped to be able to open again later in the week.

“Just another kick,” he says.

Ingram’s restaurant, Hope Breakfast Bar, has been busy for the past two months operating a community kitchen using volunteers and donated supplies to feed thousands of homeless and others in need.

On Sunday, Hope was busy feeding anybody, including protesters, police officers, reporters, members of the National Guard and firefighters.

Thanks to generous contributions from our community, we are currently serving free breakfast to anybody who stops by from 9am to noon, while supplies last. Please let anybody know who may be in need of a meal. We are located just off Grand Ave at 1 S Leech St, St Paul, MN 55102. Learn more at hopebreakfast.com Huge thanks to Kare 11 for the segment!

“Everybody showed up,” he said. “There were people shaking hands, people hugging. It was all coming together over a meal.”

Hope was not damaged, though some of the restaurant’s neighboring businesses did get broken into during the weekend of violence.

The restaurant, which opened for business just last year, has been able to survive because it has no debt and was able to get a Paycheck Protection Program loan to pay workers. The restaurant has just a small patio, one too small to be able to make the restaurant work for long without an opening indoors.

But, Ingram said, “We were excited to get open even in some capacity and find a bit of normalcy.”

He still plans to open in the coming days. Ingram just doesn’t know when.

“We’re going to take it day-by-day,” Ingram said. “We’re hoping by the end of this week, if things started to look up.”