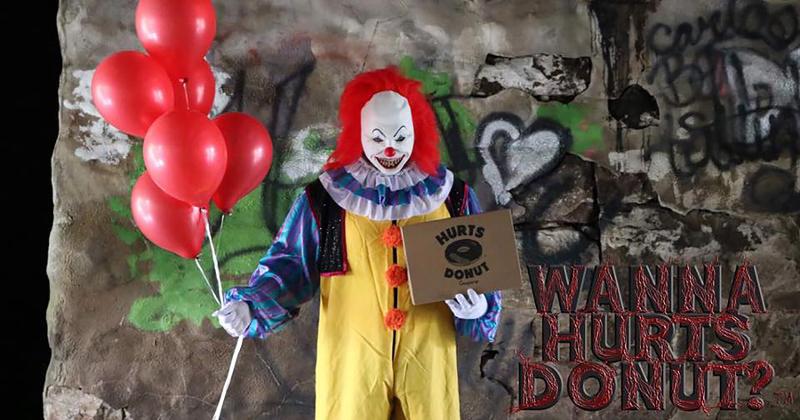 Anything less than dining next to the Manson family could be a letdown to restaurant customers this Halloween after the hair-raising frights they were dealt in recent days. A rampaging poisonous snake and menacing clowns tend to have that effect, though a misuse of the TV remote can elicit equally blood-curdling screams.

Here’s what we mean.

Rachel Myrick thought a wasp had stung her foot as she was entering a LongHorn Steakhouse in Massaponax, Va., so she tried to brush it off. That’s when she felt something squirming. It was an 8-inch-long baby copperhead, and by that time it’d bitten her three times, including twice on her toes.

She was with her son and boyfriend, who both stomped on the critter and killed it.

Myrick would spend five days in the hospital, experiencing a pain she said was worse than childbirth or having a spinal tap as a youth.  She is still on crutches, and says her doctors expect the recovery to take three months.

Copperheads are native to Virginia. LongHorn said in a statement to local media that it was working with its facilities-management team to determine how the snake got there and what could be done to prevent such a “highly unusual incident” from happening again.

With the stampede into delivery by restaurants of all stripes, some places are tweaking the service to stand apart. Few have gone as far as a Hurts Donut did this week when it dispatched an evil-looking clown to do the delivering.

Although the Dallas-area branch of the chain denied the assertion, media and consumers readily noted the clown’s resemblance to Pennywise, the monstrous Bozo in the movie “It.” That figment of Stephen King’s imagination appears every 27 years to prey on unsuspecting children.

For a $5 fee, plus Hurts’ usual $5 delivery charge, customers could have the Hurts clown show up at a door with a menacing leer and some doughnuts.

The service was offered solely on Monday and Tuesday. Hurts has not said whether it will repeat the scare-on-demand offer.

But there is a postscript: Burger King’s Russian operation has filed an official request with its home nation’s anti-monopoly board that “It” be banned from theaters there. The fast feeder asserts that Pennywise is a dead ringer for Ronald McDonald, making the movie a virtual ad for archrival McDonald’s.

Restaurant nightmares of the week: The smell of barbershops & flaming uniforms

The other national anthem controversy

A clown of a different sort triggered a publicity fright for Buffalo Wild Wings earlier this month, prompting the chain to post an apology on its website. It assured patrons the brand had not gone mad and banned the airing of the national anthem in all of its stores.

The flashpoint was the still-unexplained decision by an employee in BWW’s Eastvale, Calif., unit to turn down the sound when the anthem was played before a football game airing on the restaurant’s TVs. The crewmember asserted that the song had become too controversial, so BWW had decided to ban it chainwide.

To make matters worse for the wings concept, the incident happened on 9/11, a day when patriotism can run higher than normal.

A guest of the restaurant recorded the give-and-take with the employee and posted it on social media, triggering a firestorm.

BWW apologized, adding on its website, “This was the action of one individual and does not reflect our corporate practice. Our intent is to show game broadcasts in their entirety including the National Anthem, post-game interviews, and highlights."

The incident occurred as some restaurants are refusing to air NFL games until players and staff stop kneeling during the anthem in protest of political developments.

Understaffed restaurants had to limit their menus and hours, putting a lid on sales.

Workers are being shifted from the digital kitchen to the front line in short-staffed stores, forcing the fast casual to “throttle” digital orders during peak times.

A dip that originated in the Middle East has gone mainstream on fast-casual and school-lunch menus. Now new variations are coming out of those roots.

The Midwest burger chain, not known for taking risks, quickly developed its cheese curd topped Curderburger after its prank led to a push for a real one. The result was a social media win and, perhaps, a regular menu offering.