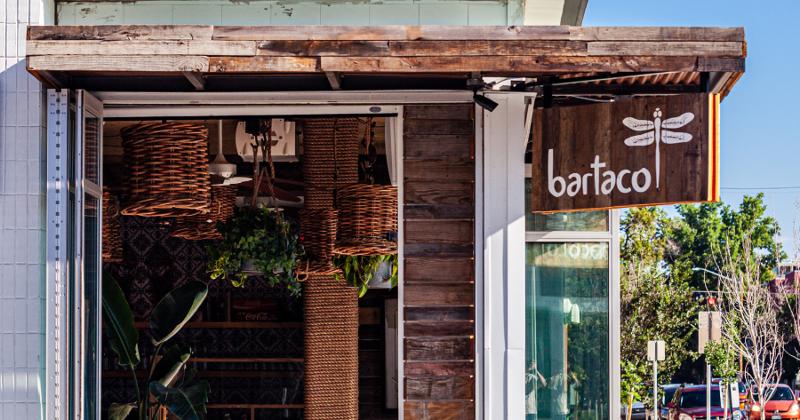 Bartaco uses reclaimed wood in its restaurants to make them more sustainable. / Photograph courtesy of Bartaco

Bartaco CEO Scott Lawton doesn’t always tell his five children what he’s doing at work. But when the 21-unit casual-dining chain recently made a big investment in reducing its carbon footprint, he made sure to fill them in.

“This one was one that I was really proud of,” he said in an interview with Restaurant Business.

The Arlington, Va.-based chain partnered with a company called Green Places, which maps out a business’s carbon impact and then invests in neutralizing it, to offset 11,000 metric tons of carbon this year. It is among several steps Bartaco has taken to be more sustainable, and one that was largely inspired by its customers and workers.

“This is something as I toured around the restaurants and talked to people ...  that was important to both our staff and our customers,” Lawton said.

Bartaco’s audience has shifted toward a younger demographic over the past year, a change Lawton associated with the rise of digital ordering. That mid-30s customer tends to be more environmentally conscious, the chain discovered, and its employees are younger as well.

Lawton was also thinking about his family and the planet that his kids will inherit as he steered the company he co-founded toward what he felt was simply the right thing to do.

The restaurant industry has a significant environmental footprint. Food waste alone accounts for 7% to 12% of global carbon emissions, said Alex Lassiter, founder and CEO of Green Places. Employees driving to and from restaurants every day is another big factor.

“The food industry in general is not great when it comes to emissions,” he said, but there is no law that requires restaurants to do anything about it.

Some of the largest restaurant chains in the country, including McDonald’s, Starbucks and Burger King, have announced plans in recent weeks to reduce their carbon footprints. But smaller companies like Bartaco don’t necessarily have the time or resources to tackle those kinds of initiatives themselves, Lawton said. He credited Green Places for enabling businesses to take those steps.

“There really was just no way for a small company to start or even think about doing something like this,” he said.

Green Places did a comprehensive assessment of Bartaco’s carbon impact and calculated it to be about 11,000 metric tons. It then invested on the company’s behalf in things like planting trees, renewable energy and carbon removal to offset it. The result is the equivalent of permanently removing 2,392 vehicles from the road, Green Places said.

Lawton did not provide the exact cost of the process, but said “it was a significant number.” And the company does not expect to see a return on the investment in traditional terms.

“We didn’t do an ROI calculation on this,” Lawton said. But that doesn’t mean it won’t have benefits. “This will help attract employees, and our guests will be proud to eat somewhere that’s part of the solution,” he said.

The partnership with Green Places will be ongoing, and coincides with other changes Bartaco has made to be more eco-friendly, such as switching to biodegradable packaging and outfitting restaurants with LED lighting, reclaimed wood and tankless water heaters.