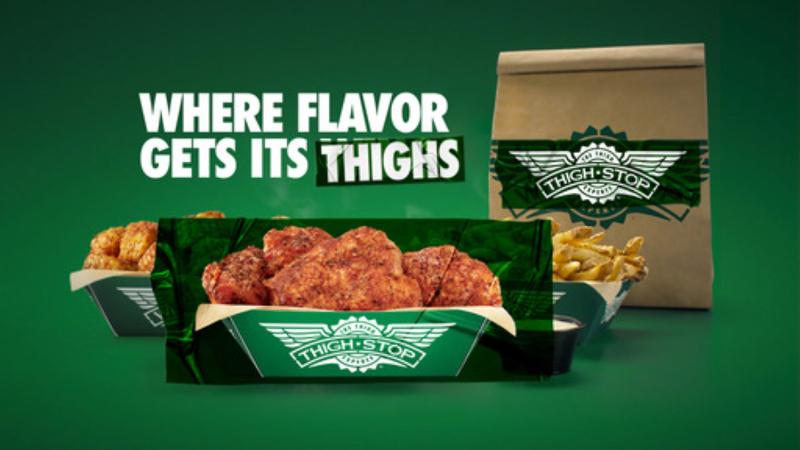 Just more than six months after Wingstop’s CEO said “we’re not changing our name to Thighstop,” the fast casual is, in fact, launching a virtual concept that sells chicken thighs.

And it will be called Thighstop.

After testing the sale of chicken thighs at some of its restaurants, Thighstop goes live as a virtual brand at all of Wingstop's more than 1,400 locations Monday.

Orders can be placed on Thighstop.com and through exclusive delivery provider DoorDash. The crispy thighs can be ordered “naked’ or tossed in the same 11 flavor options available through Wingstop.

The company is also debuting breaded, boneless thighs, which it bills as “a more juicy, flavorful take on Wingstop’s popular boneless wings.”

“Wingstop pioneered the concept of chicken wings as a center-of-the-plate item,” CEO Charlie Morrison said in a statement. “Although Thighstop is in its infancy, we’ve been exploring bone-in and boneless thighs as center-of-the-plate options for some time now as a way to offer fans new ways to enjoy Wingstop’s bold, distinctive and craveable flavors.”

Last November, Wingstop announced its test of bone-in chicken thighs in seven cities—a move designed to fight back against the notoriously volatile wing market that has seen supply shortages and high prices.

Wingstop said the test was part of the chain’s “whole-bird strategy” to use more parts of the chicken and up its contract-based purchases.

In February, Morrison said Wingstop was continuing to look for ways to use dark meat on its menu and that it would “pull that lever when we need it.”

Apparently, that time is now.

Wingstop has been a clear winner during the pandemic, as diners looked for off-premise ways to feed all of the people in their quarantine bubbles. The Dallas-based brand has logged double-digit same-store sales growth throughout 2020 and reported in April that it was surpassing the 33% comps growth of the year before.

But the chain has also been contending with record high bone-in chicken wing prices, as well as increased labor pressures, signaling the need to roll out Thighstop.

In April, Wingstop applied for a trademark for the name “Thighstop.” And earlier this month, it asked the U.S. Patent and Trademark Office to register the phrase “THIGH-STOP THE THIGH EXPERTS” as well as the logo of an arched banner over a circle with a winged, scalloped-edged border with the words “THE THIGH” on the top and “EXPERTS” on the bottom.